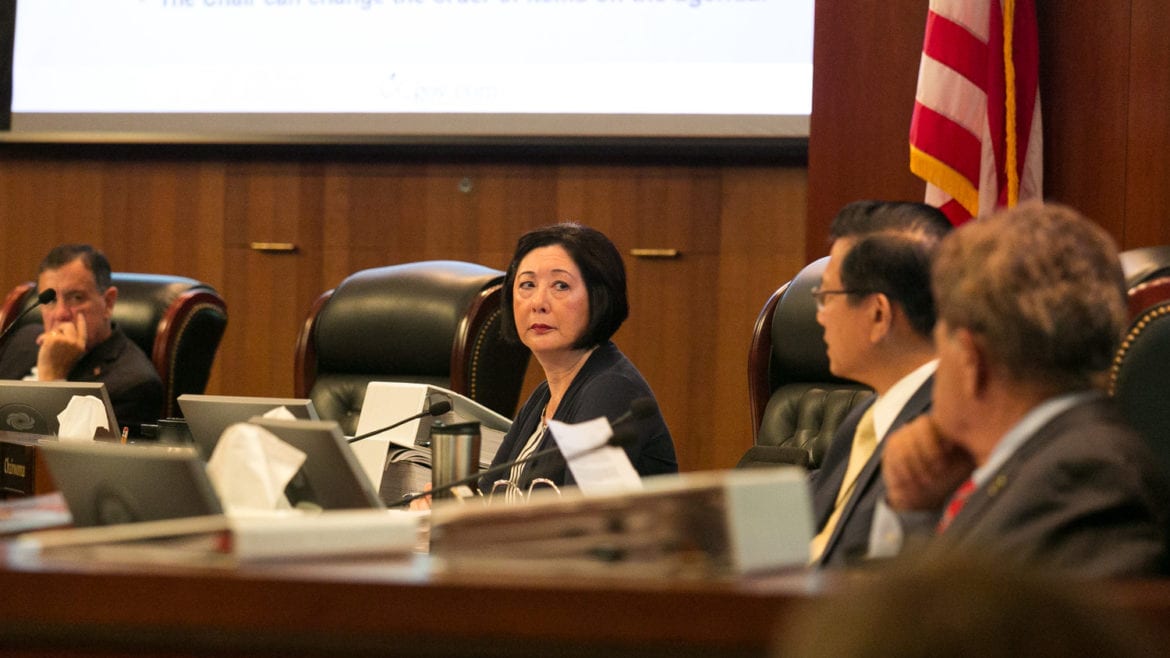 The Orange County Board of Supervisors at their meeting on Tuesday, Sept. 24, 2019.

So far, a majority of county supervisors argue that it makes more sense to have a central administrator oversee how these one-time funds get spent.

As part of a half billion dollar federal bailout package the County of Orange received earlier this month, county supervisors publicly discussed steering about $100 million direclty to city governments. About $25 million has been set aside for Coronavirus-related expenses that cities incur.

There’s a brewing debate over how to spend the rest.

County officials are concerned that without a strategic approach to spending the $75 million, local cities will not get the most benefit from the investment.

To date, Supervisors Lisa Bartlett, Doug Chafee and Andrew Do have backed a centralized approach to the $75 million investment in cities.

Supervisors Don Wagner and Michelle Steel – with the support of most mayors – want the money sent directly to local city halls, allowing those officials to make funding available through a business recovery grant program.

That plan is supported by most local mayors.

“As the Mayors of the cities of Orange County, our collective strong preference has been and continues to be local control. City leaders know their community’s unique needs. We know our business needs, our residents’ needs, and our local governments’ needs. We are best equipped to directly allocate CARES Act funding within our cities,” reads a May 19 letter sent to the county, signed by most Orange County mayors.

According to a weekend press release sent out by the City of Santa Ana, local mayors are expected to show up at today’s public supervisors’ meeting and press for direct access to the funds.

Yet there’s a heightened concern among county officials about just releasing that kind of money into local coffers, without a real plan on how to spend it.

There has already been considerable controversy over questionable Coronavirus-related contracts across Orange County, with controversial testing plans being marketed directly to local cities.

And there’s also been national fall out from controversial public procurements related to Coronavirus with one of Orange County’s most active political consultants, John Thomas, drawing a federal Department of Justice investigation into his company’s efforts to distribute medical products.

Currently, both of Thomas’ high profile clients in OC, District Attorney Todd Spitzer and Supervisor Andrew Do are both distancing themselves from him. Thomas isn’t returning phone calls about the issue.

In addition, with Orange County moving to reopen, there are pressing questions about protections for essential workers and how those kinds of issues will be connected to any grants made to local businesses.

Yet the biggest unanswered question facing both mayors and county supervisors – which could get explored in today’s debate – is where to make strategic investments.

Looking at what’s happening at meat packing plants across America, with Coronavirus infections affecting workers, there are open questions about whether Orange County leaders should be working to support local farms, even encouraging local gardening efforts to ensure the stability of local food supplies.

For example, the City of Santa Ana currently has 90 properties that are vacant – plus hundreds of other small plots across the city – that could be utilized as community gardens or commercial growing operations.

There are already ongoing community efforts by Santa Ana activists through the California Surplus Lands Act to unlock those properties for public good. Could those types of efforts be enhanced through such a stimulus?

Should other types of local farmers or artisan outdoor markets across Orange County  be supported with a local stimulus?

Should mall areas and even portions of commercial office real estate tracts start to be explored as affordable housing possibilities?

Supervisor Bartlett is raising key questions about purchasing problematic motels instead of renting them for homeless, with the aim of quickly bolstering the county’s permanent supportive housing stock.

And with so much of our local sidewalks, bike paths and trails seeing new usage, there are open questions about whether it’s time to radically update them, making them more conducive to local commerce.

Most importantly, with so many city residents currently unemployed, especially those connected to stalled tourism-related industries, does it make sense to quickly find them jobs through these types of inititiaves?

Surely, there are plenty of overdue maintenance works projects – such as clearing out flood control channels and local creeks of invasive reeds – that could be created, like a local jobs corps, to keep people who are temporarily unemployed active, engaged and compensated.

These are the kinds of big questions that county and city leaders should keep asking, to ensure that $75 million in critical taxpayer funds are spent the right way.