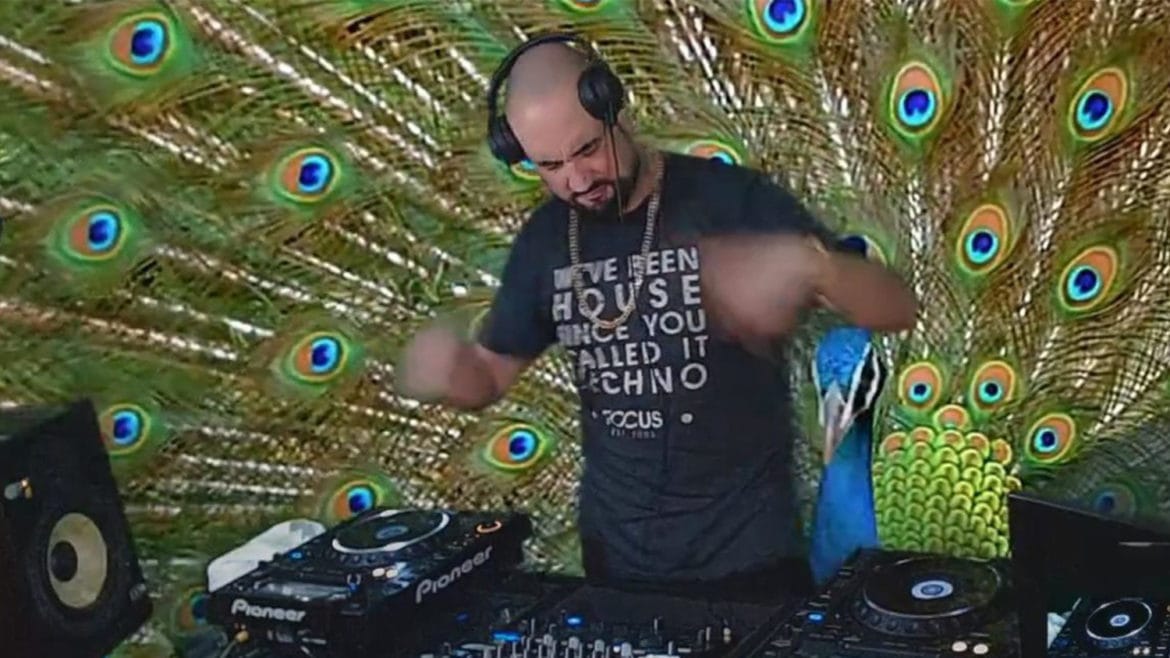 Local DJ, Nonfiction, performs house music on the Twitch streaming service. He performs to uplift the community’s spirit and help keep his DJ-ing skills sharp during the coronavirus.

The bangers lost their bass. Concert venues are oceans of empty seats and festival grounds and clubs have become ghost towns.

The days of live performances are dormant, at least for now.

But Orange County’s electronic dance music (EDM) fans – who, like many, may have lost track of the days – can turn to live-streaming for virtual performances by their favorite artists on social media, events that become highlights during the week.

“I feel like (the EDM community) definitely has something that other music communities don’t, and I think it’s that sense of belonging and togetherness. And I really love that,” said Adrian Moreno, a 21 year-old EDM fan from Fullerton. “Just because we have to isolate physically, doesn’t mean we have to socially.”

Adapting to a New Platform

That’s where local O.C. artists like Nonfiction, Cybertooth, BChang and many more come in, connecting with audiences not just in Southern California but around the globe.

“What I like about streaming right now is I get excited about it … My mom’s in Guatemala. My mom and dad are retired and my mom tunes into the streams,” Nonfiction said. “My parents never really got a chance to see me DJ … but with the streaming, they can be involved. They get to see me do what I do.”

Jose Tobar, who performs as Nonfiction, has been spinning for the past 25 years. He started as a hip-hop DJ then soon discovered house music, falling in love with the sound and the community surrounding it. 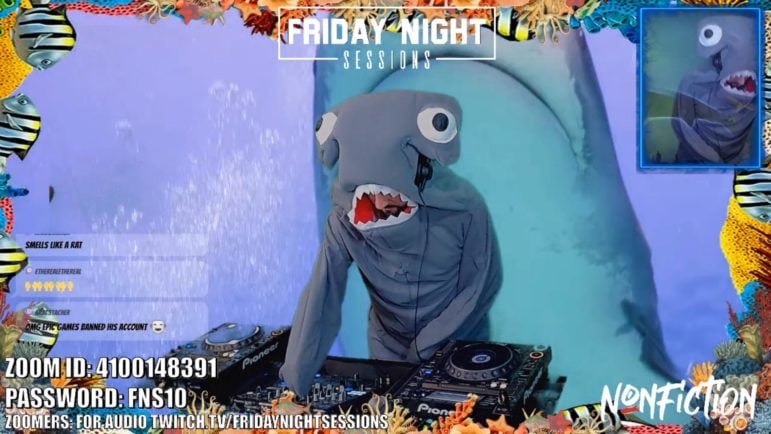 During a recent Twitch stream session, Nonfiction performed with Missy B and Mr. Koolaid as a part of Friday Night Sessions, which had an Under the Sea theme for the evening.

Pre-COVID, Nonfiction was the resident DJ for the event company Focus with his partner Josh Billings. He has been DJing with them since 2003. But with venue doors closed indefinitely, Nonfiction turned to Twitch, an online-streaming platform, where he not only brings people together through entertainment but keeps his skills and creativity sharp every Tuesday and Friday night.

“If you put me on a stage in front of 500 people and I have to perform then I’ve got to pick good music; I’ve got to mix cleanly; and I’ve got to not make mistakes. There’s a certain amount of pressure to do well,” Nonfiction said. “I think with live streaming, it keeps us as DJs and performers sharpening our tools and making sure that we stay up to par.”

With many fans finding comfort listening to music, some have found another calling – the drive to start producing their own sounds.

Cybertooth, whose real name is Anthony Belmonte, is a local DJ/producer who, while in quarantine, recently became inspired to start producing music again and reinvent his brand.

“I was never really able to find the time before. In a way, the quarantine was a blessing for me to reignite the creativity and channel my energy into music production.”

Cybertooth went to his first EDM show with his brother at age 17. They attended the “Together as One” New Year’s Eve festival in Los Angeles. The next day, he downloaded FL Studio and got to work producing his own music. Although he has played instruments such as the guitar and drums, the independence of being a DJ is what attracted him to the idea.

“I’d never seen electronic music before. And I never knew it was done to that capacity,” Cybertooth said. “I thought it was really interesting that there was only one person on the stage, controlling everything. And that was really appealing to me because I always wanted to be in a band growing up, but I could never find committed musicians.”

As young as he was, Cybertooth continued to produce music, handing out his CDs to club managers. Soon he was playing at clubs around San Luis Obispo, and although he couldn’t hang out for the night because of the age requirement, he was already on the way to building stardom under his DJ name at the time, Audiobit.

By the time Cybertooth turned 21, he had won best DJ in San Luis Obispo county at a local competition, played regularly at popular clubs throughout the county, gained a sizable crowd, and was opening up for even bigger artists like Zeds Dead, LMFAO, Laidback Luke and others.

Eventually, Cybertooth felt that he had to put DJing on the back burner and focus on his career, so he moved to Orange County and hasn’t had the time to make a song from start to finish since.

Today, the 29-year-old has started fine-tuning his craft and reinventing his entire brand with a new name, sound and look with inspiration drawn from the talents of other artists such as Excision and ILLENIUM’s “Gold (Stupid Love).”

“That kind of got the creative juices flowing and once quarantine happened, and I had to take a break from work, I had a lot more time on my hands. I just thought, ‘Why not really invest myself into learning as much as I can about production and synthesis, and try to make my own sound,’” Cybertooth said.

With a spark of inspiration and more free time, Cybertooth used his talents to work on a new project, “Ice Age EP.” His EP will be released on June 5 and can be streamed on SoundCloud, iTunes and Spotify.

The equipment for DJ-ing and creating EDM music can be expensive. While some DJs learn how to spin on their own and invest a lot of money in their artform, the nonprofit organization Dance Music Initiative (DMI) in Tustin looks to remove some of that financial load by offering free weekly DJ and light-production lessons, giving beginners access to equipment as they learn.

But given the public health crisis, DMI began canceling community classes in mid-March.

“We were pretty early. We didn’t wait for a state mandate. We said, ‘You know what, we value our community. We don’t want to put anybody at risk, especially the people who we care about,’” said DMI founder Bryan Chang.

In lieu of in-person classes, the organization has started two projects to keep the community engaged and inspire other artists while in quarantine. DMI streams a new weekly interactive podcast called “Ask a DJ” that brings in local DJs who have helped benefit the community through their organizations and events.

“Ask a DJ” gives the guest speakers a platform to talk about their experiences and promote the projects they’re working on, while also engaging with the audience and answering questions from streamers at home.

For a community that is often stereotyped as promoting drug culture, Chang aims to refocus the spotlight, promoting the artistic expression and positivity that characterize EDM culture.

“For the people who really embody it and immerse themselves (in) more than surface value, it’s such a great community,” Chang said. “It gets a bad rap. Some of that stuff happens and it’s unfortunate, but we’re about the positive side of it. We’re trying to spread it healthily and really promote the good aspects.”

"Ask A DJ" Episode 10 – Thanks for having me Dance Music Initiative!!

Thursday’s episode of “Ask a DJ” featured an interview with local DJ Breesa Renee, who began her DJing career at KUCI. With encouragement from people who participated in DMI nearly 10 years ago, she soon began doing live shows and eventually won two DJ competitions. DMI brought her back to talk about her achievements and journey to becoming an entrepreneur in the music community.

DMI is also working on a project with Tyler Greene, a member of DMI’s board of directors, called RTG Show. It aims to expand the artistic community through music, visuals and light production, and it can be streamed through the RTG Show website or Twitch.

“We just are basically trying to stream our faces off right now. We’re so hungry for music and art, and we don’t know what else to do other than what we’ve always done, which is make lights and stages,” Greene said.

Greene asks for people in the community to submit their at-home mixes. He and his son then coordinate the mixes on a stage in his garage, where he broadcasts a live show.

During a time of crisis, EDM music has uplifted communities and made people feel as if they are a part of something bigger than themselves.

“(Live streaming) is important because it keeps the community alive. I think the EDM community is a very tight-knit community. It’s full of love, positivity and good energy, and people just feed off of that,” Renee said. “So during these hard times it kind of makes you feel good, no matter what the situation is.”