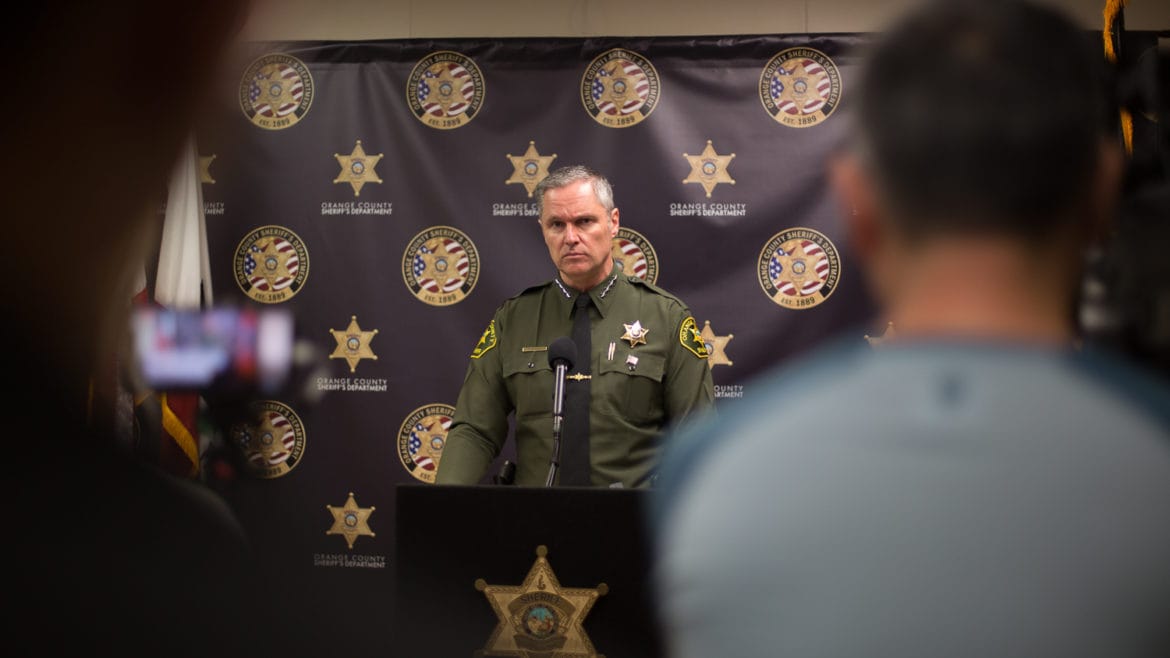 Sheriff Barnes speaks to reporters on March 6, 2020 at his first monthly briefing.

Orange County Sheriff Don Barnes is threatening to cancel his department’s policing contract with the city of San Clemente after a protest on Thursday resulted in eight arrests.

City officials put up a fence blocking beach parking access earlier this month, a move that council members tried to later vote down when some residents protested. When the council deadlocked and the fence remained, civil protests ensued and Sheriff’s officials made arrests this week.

The beach is still open for active use, but the intention of the fences was to limit the amount of parking at the beach according to city staff.

In a letter sent to interim city manager Robert Dunek on Friday, Barnes said that the protests “could have and should have been avoided.”

“Despite several conversations with yesterday’s protestors…a conscious decision was made to commit law violations that would result in an arrest,” Barnes wrote. “My hope following yesterday’s incident was that the City Council would reevaluate the necessity of keeping the fence intact and have it removed; however, the city council has failed to act.”

“I am evaluating our option to terminate our contractual police services relationship.”

The council voted 2-2 to take down the fences at their meeting last Tuesday, leaving them up until the council takes other action.

“If he feels it’s an untenable situation to address public safety issues adequately in a city, then he needs to respond appropriately,” said County Supervisor Lisa Bartlett  on Saturday when asked about the letter. San Clemente is part of the district she represents.

Former mayor Dan Bane resigned his post at the end of April to move out of state for a new job, and since then the council has been deadlocked on over a dozen issues in two council meetings.

The council has not appointed a new mayor or appointed a temporary councilmember to hold Bane’s seat until the November election, and was also deadlocked on the vote to take down the fences that the protestors were attempting to disassemble.

Councilman Gene James, who voted against leaving the fence up, described the city’s predicament as “a self inflicted wound.”

We could have avoided this entire situation,” James said. “We did indeed put out sheriffs deputies in a very bad situation.”

James said that he tried to call an emergency meeting of the council on Thursday night, but that Councilmembers Hamm and Ward did not respond to his request and that Councilmember Laura Ferguson felt that the meeting was unnecessary without the support of another councilmember.

Since Bane’s departure, Ferguson is serving as the acting mayor until a new mayor is appointed by the council.

In a phone call with Voice of OC on Saturday afternoon, Ferguson said that she agreed with many of Barnes’ arguments. Before serving on council, Ferguson worked as a member of city staff, and said that the sheriffs had struggled to obtain funding from the city for years.

“We have statistically the most calls for service in South OC and the least number of deputies per capita,” Ferguson said.

“The city manager authorized the fencing to go up four days before a protest. When we closed them we said barricades and signage. The city manager didn’t have to get a vote of council to install a fence, he doesn’t need one to take it down.”

“No vote or anything, he did it. You can undo it the same way, that’s just how it works. It’s not wrapped up in a vote having to go to council.”

Dunek responded by saying that after the council failed to reach a consensus at the meeting surrounding the fencing, it stripped his ability to instruct city staff on how to handle the situation.