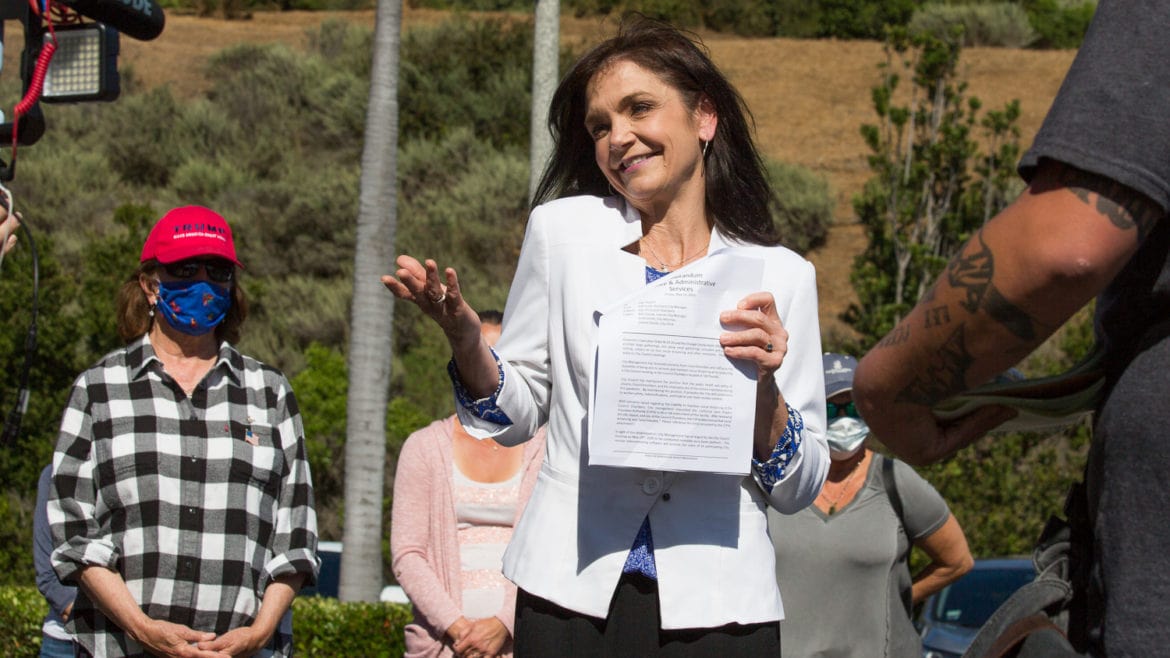 Councilmember Laura Ferguson shows a memo from city staff instructing the council to meet via Zoom on their May 19 meeting.

The 2-2 vote came after Interim City Manager Robert Dunek came under fire earlier Tuesday for barring the City Council from meeting in person, sending out an email on Sunday instructing members to connect from home and noting that city staff would not be required to come to the council chambers.

In a press release Tuesday morning, Councilwoman Laura Ferguson said she would not be attending the meeting via Zoom and would go to the council chambers at 4 p.m. She said the public should be able to see the council and not just a video of the city seal.

Councilman Gene James joined her outside the building, where they hosted a brief press conference criticizing Dunek again.

Ten minutes before the start of the council meeting, in a text to Voice of OC Ferguson said that she and James chose to establish a compromise: They would participate in the Zoom call from the council chambers.

“Didn’t want to delay the businesses of the city for the people,” Ferguson said in the text. “Too many important matters to tend to tonight that can’t wait til the next meeting in June.”

The council also had technical difficulties with the streaming software, including a point where the council’s broadcast dropped out for several minutes. Those missing minutes had not been published by the city as of 11:30 p.m. Tuesday.

The items on the agenda for the missing period included appointments of council representatives to several vacancies on various committees, a revision to the council’s 11 p.m. meeting cutoff, a consideration of ending or modifying the existing coronavirus emergency order and the discussion on whether the council should meet in person or through teleconference.

However, the broadcast came back just in time to show the vote on whether the council would meet in person, with Councilmembers Chriss Hamm and Kathleen Ward voting against returning for in person meetings.

After the vote, Ferguson directly asked Dunek why the videos in the council chamber had not resumed.

“When we had no one there, it was inappropriate simply to show a vacant council chamber, and consequently we moved to show an image of the city seal,” Dunek said. “It was certainly my judgment that it would be inappropriate unless the council told us to do something differently.”

Ferguson responded that the council should not need to vote to resume the video, as they never voted to suspend it.

“It’s a decades old practice of video taping, so we should be able to direct it back,” Ferguson said. “It was very much a disservice to people watching.”

In a text at the end of the meeting, Ferguson said the streaming issues “only reinforce how remote governance should be avoided if possible.”

The council also had an item listed in closed session to discuss appointing a permanent city manager, but took no action according to the closed session report. Dunek has served as the interim city manager since January, taking the position three years after retiring from 21 years as Lake Forest’s city manager.

Public commenters criticized the council meeting’s broadcast, stating that the city manager’s office had failed to fulfill its duties and that City Hall should be reopened to the public.

“The presentation has been downright embarrassing,” said one commenter who submitted their complaints via email. “It’s a failure and it’s unacceptable.”

“You can’t hide from your constituents forever,” another commenter wrote. “Chambers will be opened and you’ll see our wrath in person.”

The next council meeting is set for June 2 and will be held remotely, with the option for councilmembers to come to chambers and stream from there if they wish.