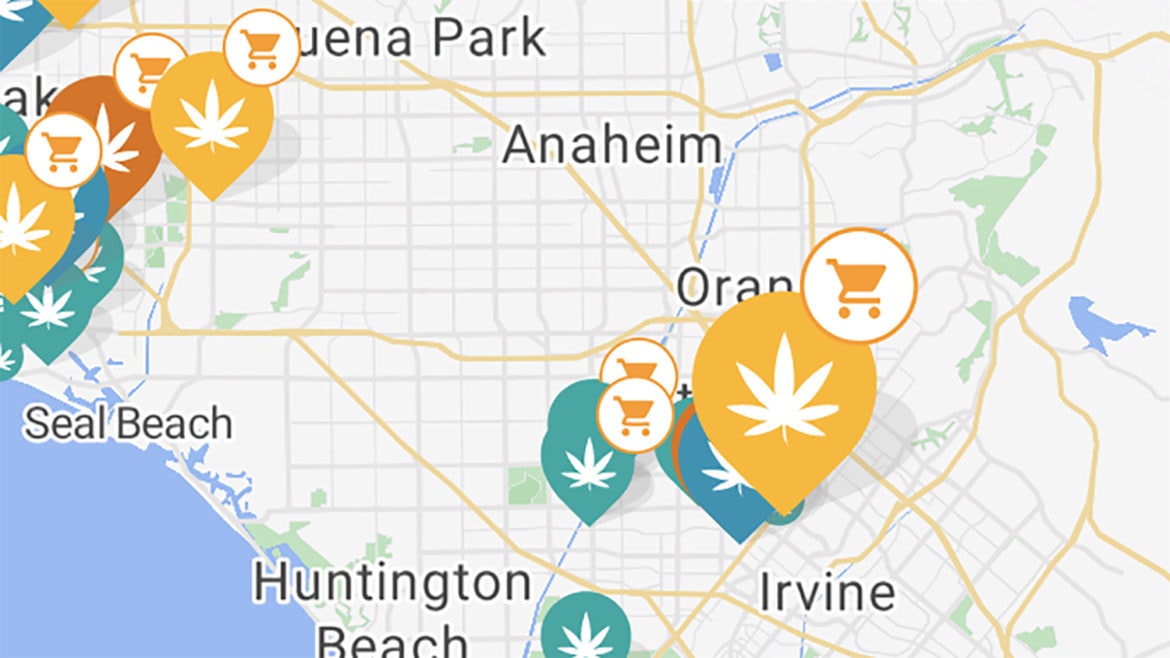 A map of marijuana dispensaries around Anaheim, according to Weedmaps.com, an online social network for legal marijuana on June 12, 2020.

Anaheim City Council members have turned down allowing cannabis shops to open in the city.

At last week’s public council meeting, many residents argued that cannabis sales could create a much needed new revenue stream to fill an expected $75 million budget shortfall stemming from the novel coronavirus.

Questions were also raised about the timing of the initiative as well as what interests would benefit.

“There will be people who benefit from this, let’s not kid ourselves,” Barnes said. “I really feel it would be best for Mr. Ament to come forward in this discussion.”

Ament was not present at the meeting and did not respond to requests for comment.

Barnes said Mayor Harry Sidhu should also be upfront about why he supported changing city law to allow for cannabis shops.

Councilwoman Lucille Kring said she has been trying to bring the cannabis debate forward since January, but was stalled by the novel coronavirus pandemic and the city’s response to the virus.

Although Sidhu initially voted to allow pot shops to come to town, he later changed his decision to a “no” vote.

“Like air your laundry, let us know, are we really, really letting the chamber run this? This is very challenging for those of us that want to see a leadership that is not in bed with someone else and at this point in time I would feel better if you asked him to do it, Mr. Mayor, since he’s your aide,” Barnes said, claiming Ament is Sidhu’s aide.

Ament is not an official aide, according to Sidhu’s staff listing on the city’s website, yet many council observers, like Barnes, believe he functions as one.

During the meeting, Sidhu responded to Barnes only by saying, “Thank you so much. I already cleared the air, and if you don’t get it, it’s your issue.”

Before Barnes’ criticism, Councilman Jose Moreno asked why he saw chamber representatives and cannabis industry leaders coming out of the mayor’s office after Sidhu said the city manager had been speaking with them.

“Mr. Mayor, I personally saw members of the chamber and other members of the industry coming out of your conference room, meeting with you over the past several months, before COVID. So to say you were not at all involved is entirely not accurate and not truthful,” Moreno said.

“I would hope that when businesses come to you, you don’t refer them to the chamber, you refer them to our actual community and economic development team in the city of Anaheim,” Moreno responded. “That doesn’t smell well.”

Councilman Jordan Brandman stepped in and said he spoke with the city manager’s office about the issue and various department heads, which prompted some community outreach from the former city manager, Chris Zapata.

The shops could have created a new revenue stream for the city, which is grappling with a projected $75 million budget deficit, said Kring.

All city departments face a 20% cut because of the deficit, according to acting City Manager Greg Garcia.

Kring, who spearheaded the cannabis efforts, also said the legal shops would be much safer than the illegal ones that currently operate in the city.

Illegal cannabis shops in West Anaheim often pop up, get shut down, and open up somewhere else.

Kring likened the transition from illegal to legal cannabis shops to Prohibition, which outlawed alcohol in 1920 and was repealed in 1933.

“As soon as Prohibition was done, all the people who made bathtub gin went out of business and people didn’t die because the product was well-regulated and you knew exactly what was in the product,” she said.

But Kring didn’t gain enough traction with her colleagues.

In a rare instance, Councilmen Trevor O’Neil – a Republcian – and Moreno – a Democrat – voted together.

“At the last meeting, I made it clear under no uncertain terms I don’t support bringing cannabis sales, production or distribution to Anaheim. I don’t think it’s a good thing for our community …. for our at risk youth. I certainly don’t think we stand to gain any significant revenue out of this,” O’Neil said.

“Maybe we just bite the bullet given the huge budget reductions we are about to face,” Moreno said. “It seems to me a trend in cities is to reduce the tax rate … to 1%.”

Councilman Steve Faessel, also a Republican like Barnes, said he was absolutely against the idea based on his principles.

Both Barnes and Faessel also cited concerns about potential crime surrounding the shops.

But Faessel acknowledged that it’s only a matter of time until the cannabis shops are allowed.

Council members initially voted 3-4, with Brandman, Kring and Sidhu voting yes. Sidhu later changed his vote to a ‘no’ vote. Council members also voted against putting a cannabis shop tax measure on the November ballot, which is required before legal shops can open.

Moreno said, while he supports the legal shops, he couldn’t vote for it because Sidhu’s son is a lobbyist for the cannabis industry and not enough community outreach on the issue was done.

Sidhu recused himself during the initial discussion about the shops last month, but the Fair Political Practices Commission recently ruled it’s not a conflict of interest if Sidhu participated in the debate.