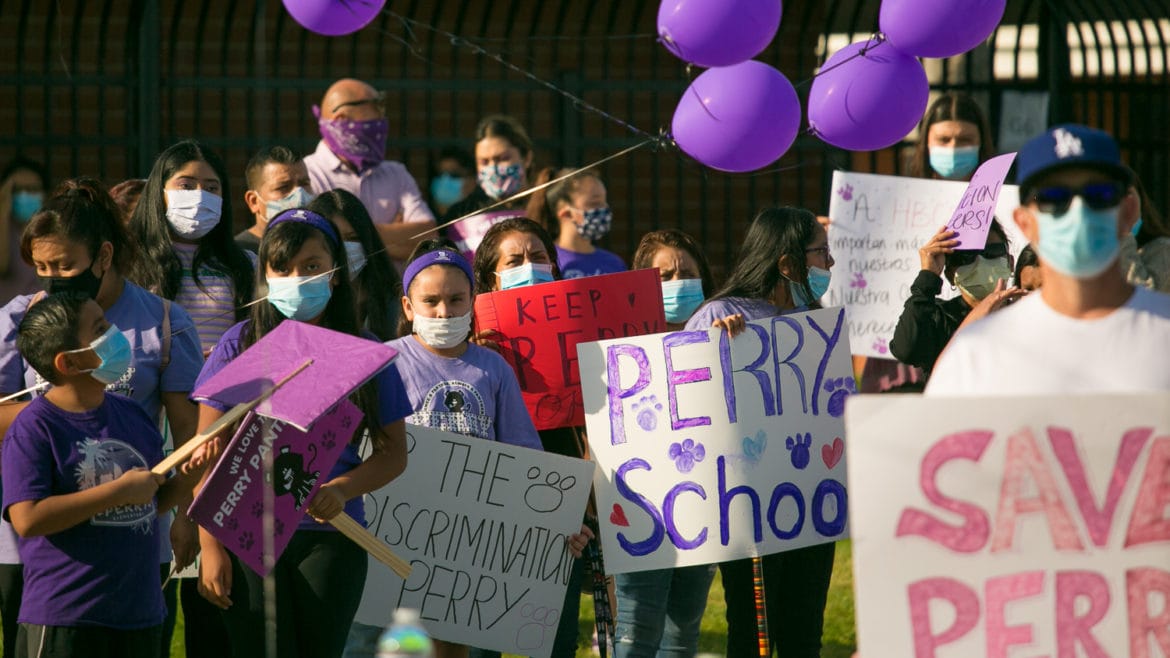 Huntington Beach parents are still fighting to reverse the closure of a school serving their district’s highest concentration of Latino and English-learning students, whose lives parents say will be upended once forced to transfer and commute elsewhere.

Dozens gathered outside Joseph R. Perry Elementary School on Tuesday for a protest where children held up signs reading “Save my school” and demonstrators marched around the surrounding neighborhood.

Huntington Beach City School District board members in April voted to close the school in the midst of a financial crisis, reasoning the closure would save operational costs and buy them time to address the district’s budget, currently projecting a $6.9 million deficit in a few years.

District officials at the time also said it would help ward off the threat of the community losing its grip on classroom decisions and school programs in the event the district fell into state receivership.

That same evening of the protest, school district superintendent Gregg Haulk resigned at a coinciding school board meeting, writing in a letter: “it’s time for new vistas in my retirement … this decision was not made lightly and took much time and consideration.”

Haulk was a key focus of scrutiny over the process leading up to the school’s closure. He’ll be replaced by former Buena Park superintendent Greg Magnuson, who was brought on by the Huntington Beach City School District to mull over a financial plan for the city. It was Magnuson’s recommendation to close a school.

After a previous closure threat in 2018 — which officials backed off on that year — a more recent study by a school district task force recommended Perry’s closure again this year.

Critics say the district’s been circling Perry for years because of many students’ low socioeconomic status, and that Spanish-speakers were excluded from the task force meant to study the district’s options.

“They didn’t give us an opportunity to express our feelings and opinions about the closing of the school,” said Stephanie Brito, a parent who spoke to the crowd during Tuesday’s protest. “My son goes to the school, I’ve had great communication with his teachers … I came here today to raise my voice together with the community for what’s right, for justice. We will not stay silent and not give up for our kids and the community.” 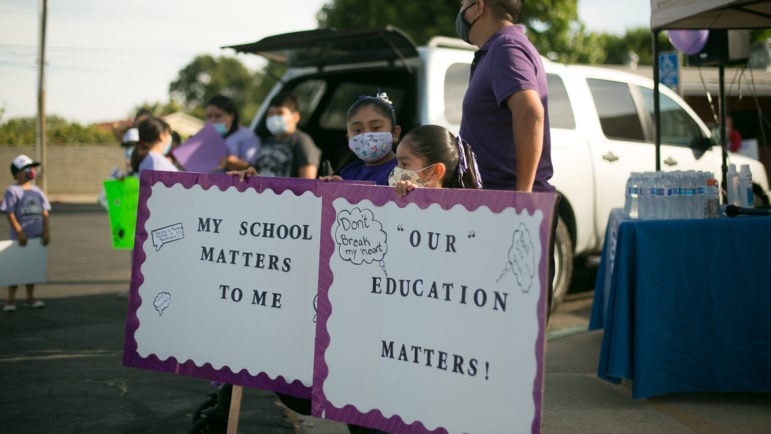 Parents have decried the closure and its impacts on a Latino community inside the school district where providing transportation is difficult for some families and parents are largely tied up with work.

Many are concerned that some low-income families will now have to pay for their kids to use the bus to travel to a farther school or adjust their work schedules to drive their kids.

The basic charge to ride the bus per student is $224 per semester. For students who qualify for free lunch, the bus pass is $30 per semester.

Perry serves a student population that’s around 40% Latino and 48% low income, according to official school data. More than 380 students attended in the 2018-2019 school year, according to state education data.

With the decision to close the school’s doors, district officials have also opened one to a possible lawsuit — something that the Mexican American Legal Defense Fund (MALDEF) in Los Angeles has been warning of for months. The group’s staff attorney, Deylin Thrift-Viveros, was on his way to the protest when he said over the phone that he’s continued to hold interviews with Perry parents and the lawsuit is still in consideration. 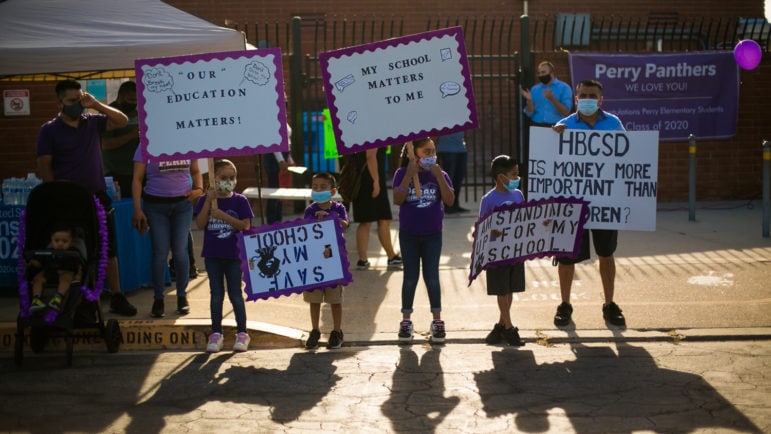 Speaking to the crowd later in the day, Thrift-Viveros said not only would the school closure create additional harms like “further transportation and the loss of beneficial programs,” but it would also take away “an essential part of the Latino community in Huntington Beach.”

“Many of the parents I have spoken with are concerned not only about their own students, but also the teachers and the staff at Perry,” Thrift-Viveros said, adding that MALDEF has become involved in this case “because this is simply a matter of fairness.”

The formation of the task force was marked by a process where the application for membership was only provided online, in English, and applicants were required to submit a résumé, Thrift-Viveros pointed out in a legal letter from MALDEF to the district in April.

The letter argued the requirements were unnecessary for a task force member “to adequately fulfill the role, and, instead, served as impediments preventing community members served by Perry Elementary” like non-English speakers “from participating in such an important decision.”

“Because of all these reasons we urge the district to listen to all the parents gathered here today and reconsider the closing of Perry Elementary,” Thrift-Viveros said to the crowd. “At least until a fair process can be implemented.” 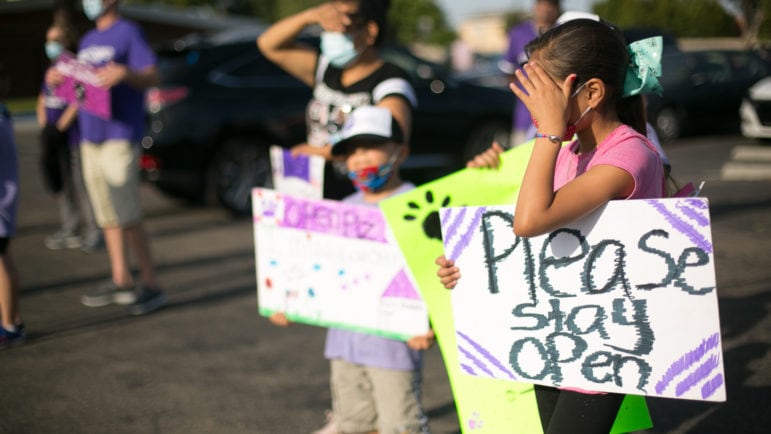 A homemade sign made by a Perry Elementary student.

Requests for comment from all the Huntington Beach City School board members largely went unreturned due to a coinciding board meeting Tuesday night.

John Ashby, director of child welfare and attendance at the district, in a phone interview said “we have a very passionate community here in Huntington Beach, but the process of choosing Perry for closure was over the past six months — there was ample opportunity to make sure all voices in the community were definitely heard.”

Proponents for the school’s closure said it has suffered ever-declining enrollment.

In public comments at an April 14 school board meeting, Kyle Kason, a member of the school district task force who supported Perry’s closure, said it “would affect the least amount of students” and that he didn’t believe “there are any elementary students walking two miles to school in this district.”

Perry’s campus “has not been upgraded, and many of its students are already on buses,” he said, later adding that “students have been transferring out of Perry for years, and they will continue to transfer out of Perry in the future.” 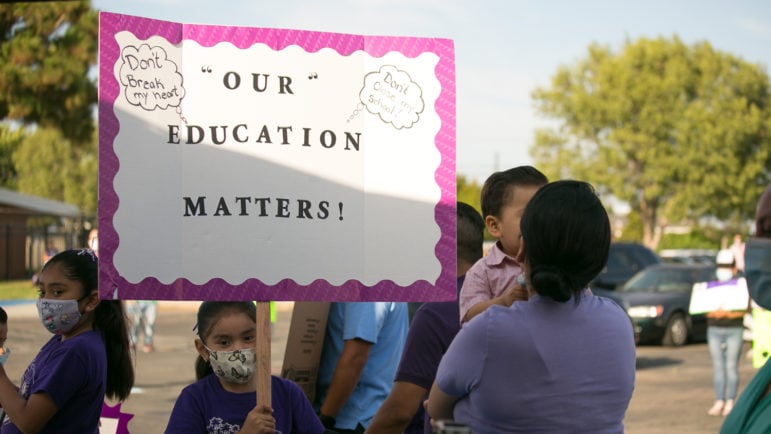 Asked about MALDEF and parents’ arguments that the school district task force was exclusionary, Ashby said, “There was a very specific process to make sure we had legal advice from our legal team to make sure things were done in a proper manner.”

“Everything was followed according to law, making sure everything was done correctly,” Ashby said. Regarding a possible lawsuit, he added “we look forward to an opportunity to respond to anything brought forward.”

Community activist Oscar Rodriguez and Perry parent Kurt Chrestensen together organized an advocacy group, dubbed “Justice for Perry,” in an attempt to stop the closure. 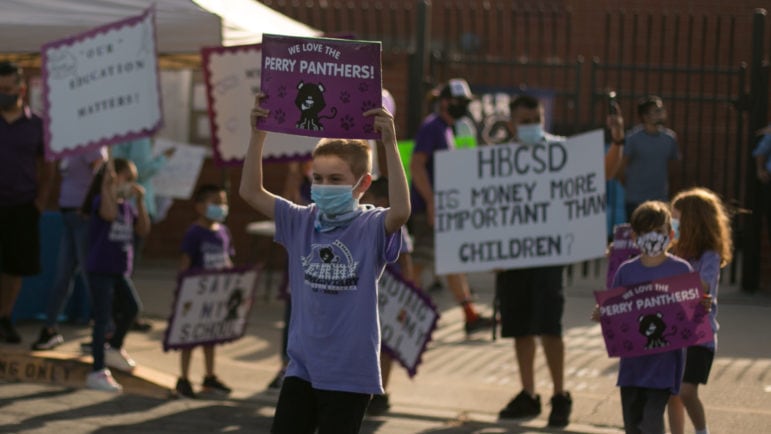 In a text message leading up to the protest Chrestensen said the district, on top of closing the school, was withholding Parent Teacher Association funds that “our parents had raised” and was “not allowing us to do an end-of-the-year celebration with it.”

Ashby said he would need more information, but that “we have been working with Huntington Union Council, which is our big Parent Teacher Student Association area, and we have been in communication with them about how many students are moving from Perry in order to make sure those funds are distributed appropriately.”

Rodriguez said he’s been trying to communicate with parents and “making sure they know, in Spanish, what’s going on.” 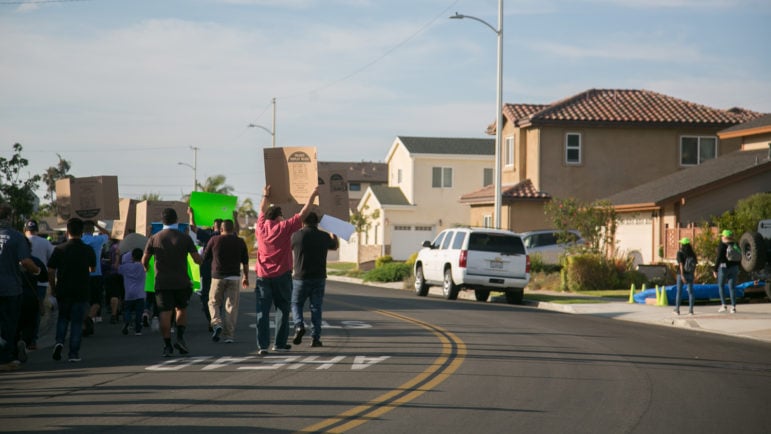 Rodriguez is running for a seat on the City Council in November. He grew up in Huntington Beach and advocates for the city’s Latinos with the community group Oak View ComUnidad. He said he hopes that with the protest, “the school district will acknowledge they made a mistake by not including parents and families in these conversations.”

“They could’ve been a bit more open. We’re hoping, as they see more people here at the rally, they would somehow reconsider,” he said. “I know it would be tough, but we want to show there’s community support to save Perry.”