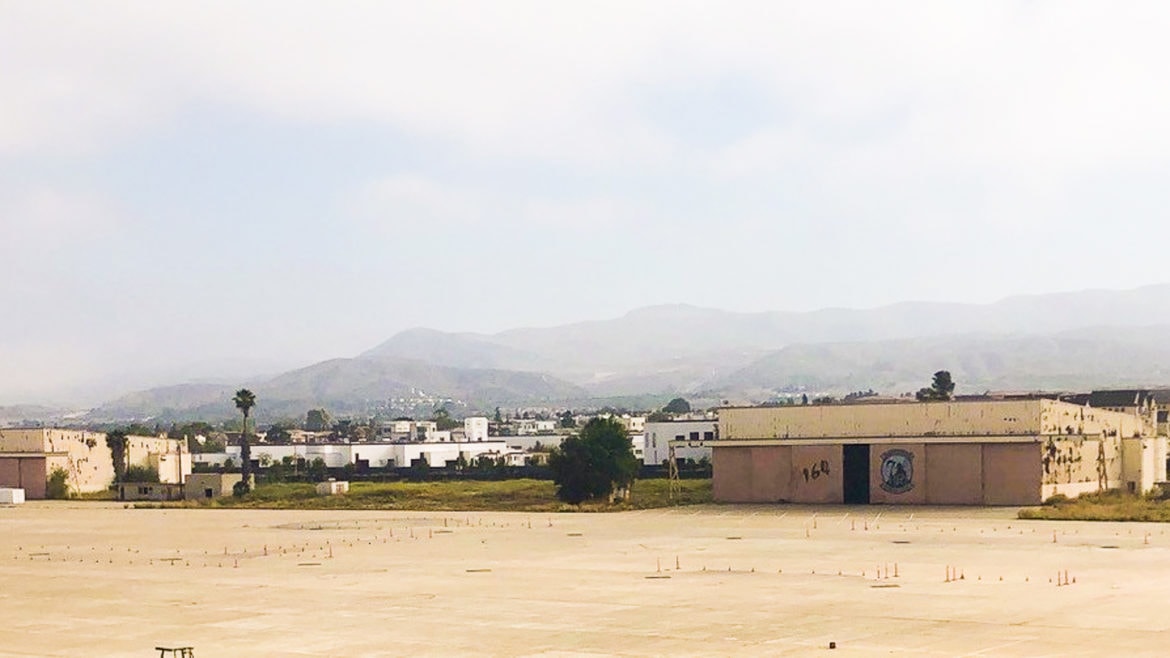 The hangar site that the cemetery is set to be built on features runways and old buildings from the El Toro Marine Corps Air Station. (Courtesy of Build the Great Park Cemetery)

Irvine could break ground on a state veterans cemetery in the near future depending on actions taken by the City Council at its upcoming meeting, with plans to begin demolition and lay the groundwork for the project on the agenda.

The council has debated the site of the cemetery for over seven years, and at a meeting in May chose to adopt a voter initiative that would place the cemetery on a portion of the former El Toro Marine Corps Air Station with portions of hangars and runway still intact. The cemetery was previously set to go on land once zoned to be a golf course in the Great Park.

Council members Farrah Khan and Melissa Fox agendized a discussion on potentially starting demolition at the site using city funds based on a plan developed by Build the Great Park Veterans Cemetery, the organization that put forward the voter initiative that the council approved.

The land will eventually be given over to the state to construct and manage the cemetery but Larry Agran, a former Irvine mayor and one of the authors of the plan, said the city would only have to front the money for the demolition, and the state could reimburse it later.

“Demolition has to be done in any event…so why not do it now while the city owns the land? If and when it becomes a veterans memorial park and cemetery, those demolition and clean up costs will not have to be borne by the state as part of the cemetery construction plan,” Agran said in a telephone call with Voice of OC.

“It’s just a question of kind of advancing the money, moving quickly to make these improvements so we don’t lose more time, and put that into the transfer agreement, a requirement that the state reimburse the city and the Great Park,” he said.

The plan also calls for the creation of a trails system and new trees along the edges of the site, which is just over two miles in length.

But opponents of that plan have brought up concerns that without additional funding guaranteed from the state for the cemetery, the city shouldn’t move so quickly to start construction.

Developer FivePoint Holdings was originally set to contribute $28 million to the golf course site and has pulled its funding with the transition to the hangar site. FivePoint declined to comment on the reason behind the decision.

California had originally promised $24.5 million in funding toward construction, but the state budget has not been finalized as officials work to counteract the deficit caused by the coronavirus pandemic. The proposed budget still has the funds, but state senate and assembly staff have said that is by no means a guarantee.

The only funding that is currently saved from the state is $700,000 to conduct a study of the golf course and hangar sites to determine which is most feasible, but advocates on both sides have argued over whether or not that study is still a necessity.

State legislators have also clashed over whether or not the hangar site will be the final spot, with Sen. Bob Archuletta, chair of the state senate Veterans Affairs Committee, calling for a study to be completed while a delegation of Orange County state officials have asked for the state to move the funds to the hangar site.

Nick Berardino, president of the Veterans Alliance of Orange County, has said that if the city wants to move forward on this site without confirmed backing and without the study, it should be prepared to pay for the entire project, which the state Department of General Services estimates could cost anywhere between $60 million to $90 million.

“It still is extremely unlikely that the money from the state will be made available without studying which is the best site serving the interest of taxpayers,” Berardino said in a telephone call with Voice of OC.

“If they move forward, without a study, rather than a state cemetery, we will have a city veterans cemetery.” he said.

The council’s discussion is set for Tuesday night, and can be viewed at the city’s website.