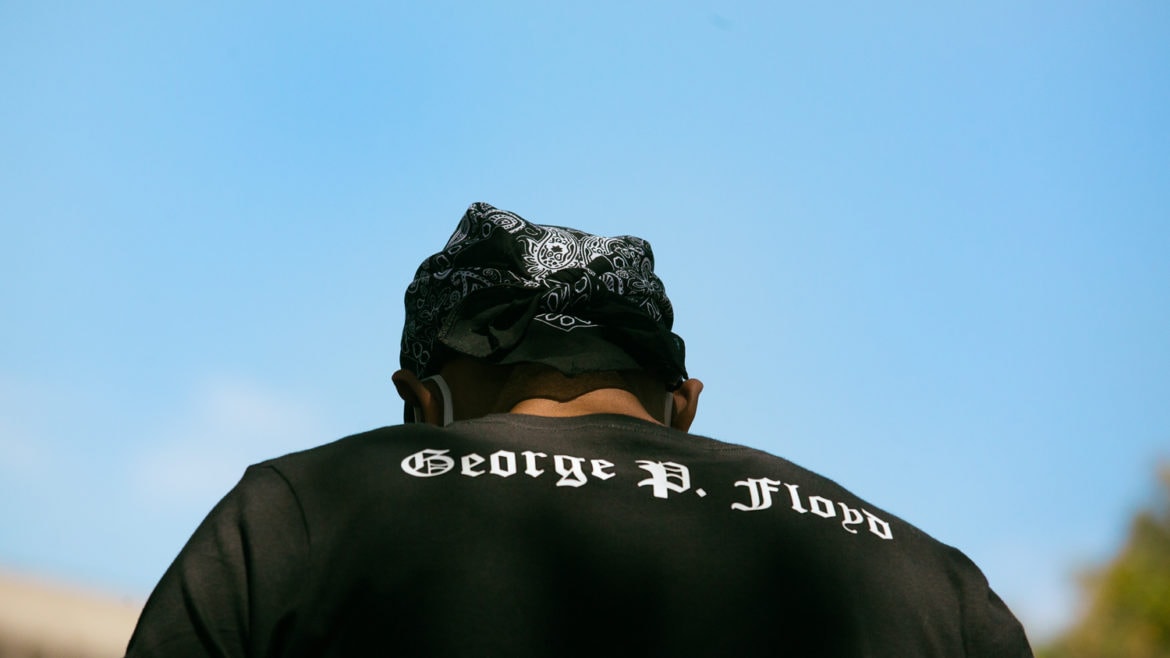 An attendee wears a shirt in memory of George Floyd at the vigil that took place in Santa Ana on June 19, 2020.

A somber, Black-organized vigil marked by moments of silence for victims of police violence and racial injustice at times doubled as a block party with music on the steps of a Santa Ana park that, to local activists, memorializes local Black history.

Friday’s rally comes on the heels of a late night City Council meeting, where Santa Ana’s Democratic majority — despite a wave of objecting public comments — increased the police budget without any enhanced investments toward alternatives like parks or youth programs. In addition, Santa Ana council members opted to study instituting police review panels, something that only nearby Anaheim has established.

By design, Friday’s rally coincided with Juneteenth, which commemorates the year when Black slaves in Texas were proclaimed free two years after the Emancipation Proclamation of 1863.

But more recently, the rally joins a series of recent protests that have been underway in Orange County throughout this month, ignited by the Minneapolis police killing of George Floyd, a Black man, and further fueled by another police killing of Rayshard Brooks, another Black man, in Georgia. 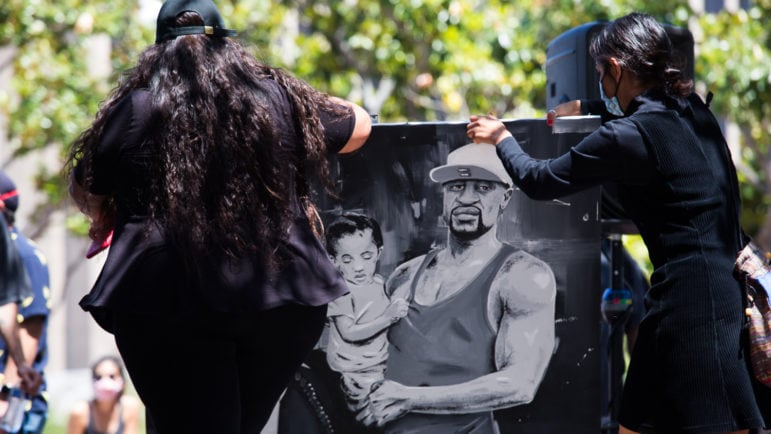 A portrait of George Floyd and his family is displayed during the vigil.

The number of protests this week was noticeably smaller than the week before, though local organizers like Zoe-Raven Wianecki — a queer Black Santa Ana resident who runs the OC Protests Instagram page — said to expect a resurgence of public demonstrations in the weeks to come.

“We were taking this week to regroup,” she said of organizers and leaders who have been working together to hold protests and demonstrations all over the county this month, over the phone Thursday.

The Friday vigil was put on by Black community empowerment group Black OC at the steps of Sasscer Park, named after Santa Ana police officer Nelson Sasscer whose killing in the 1960s had been tied to the local Black Panthers chapter.

The event was filled with speakers like Daniel Michael Lynem, a former Black Panther from the Santa Ana chapter, and Karamo “Dr. Chill” Chilombo, a pediatrician and activist who’s the father of R&B singer Jhené Aiko.

“Our patience as Black men has run out – we will no longer be led by deceit, to slaughter,” said Chilombo, who also spoke on racial solidarity under the shade of the park’s trees and a beanie emblazoned with the colors of the Pan-African flag.

Among the slate of poets, artists and speakers was singer Omoghéné, who belted a slower and passionate rendition of Kings of Leon’s “Use Somebody” in between speakers. 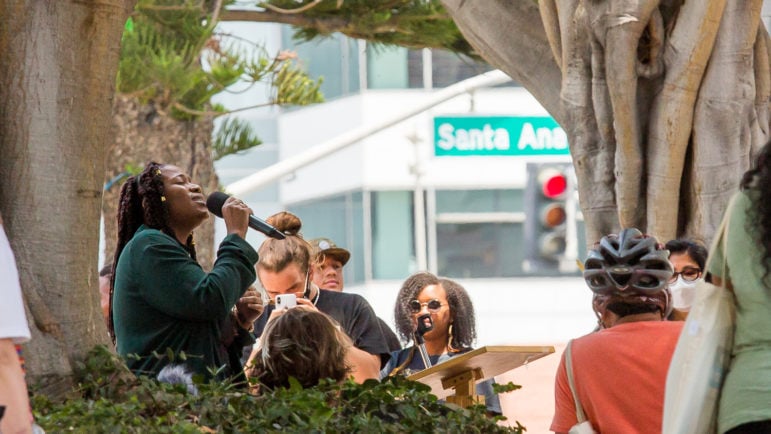 “We gather here in this location for a very specific reason,” said Black OC director Ferin Kidd during the vigil. “There was a time when OC had a vibrant, thriving and powerful Black community, that was located here in Santa Ana. During that time, there was a movement and struggle against the same forces we’re fighting today – that organization, that movement was called the Black Panthers.” 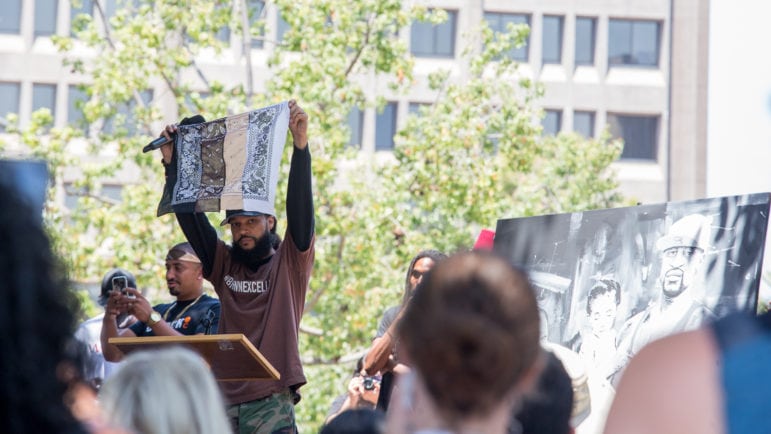 Ferin Kidd, holds up a Black OC unity flag during his speech at the vigil remembering black lives on June 19, 2020.

Kidd had to pause for the eruption of cheers and applause.

When the Black Panthers arrived in Santa Ana, there was a hub of close-knit Black businesses and residences in the city, an outcome of real estate segregation throughout the first half of the 20th Century. But after the passage of federal, anti-discrimination housing laws and success of local efforts to open up more housing in the rest of the county to Black Americans and people of color, that visible community in Santa Ana waned as the real estate barriers dissipated and folks branched out.

The local Black Panthers chapter worked out of Santa Ana up until the late 1960s, and dissolved following Sasscer’s killing and the police department’s controversial ensuing investigation that focused on Black residents and community leaders at the time, according to OC Weekly. The Los Angeles Times back in 1970 noted a tanking in police relations with communities of color in wake of the department’s handling of the investigation.

In Orange County, issues of Black visibility in local government and activism are being raised among Black organizers and leaders, and conversations have been reenergized around the concept of more local, Black community centers in a county that already sees hubs for Latinos, and Arab and Asian American communities.

At the park, many attendees noted what seemed like a nonexistent police presence. 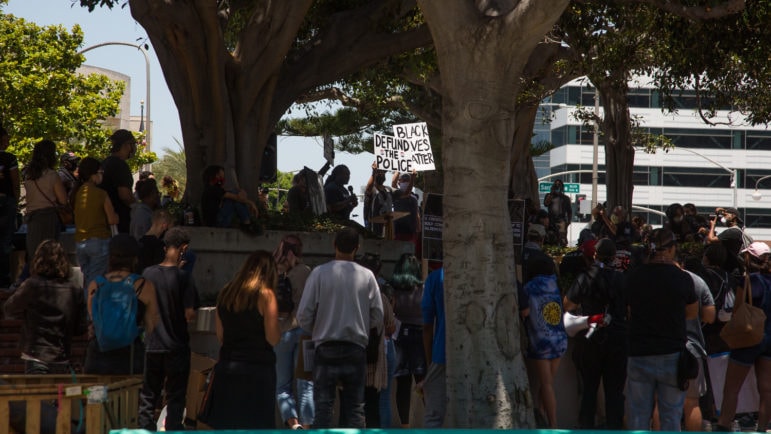 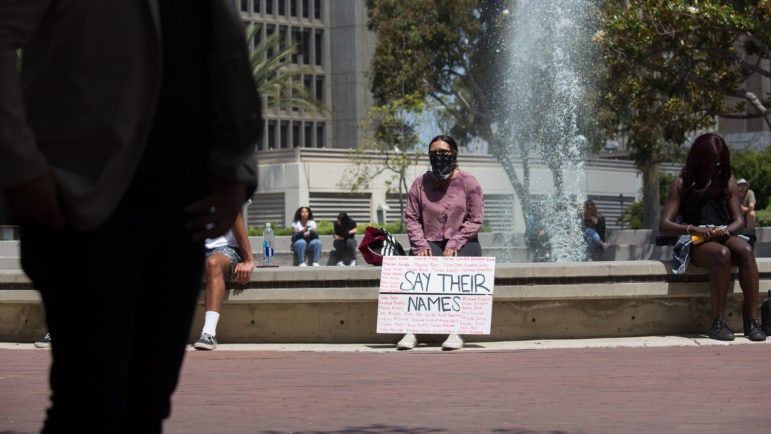 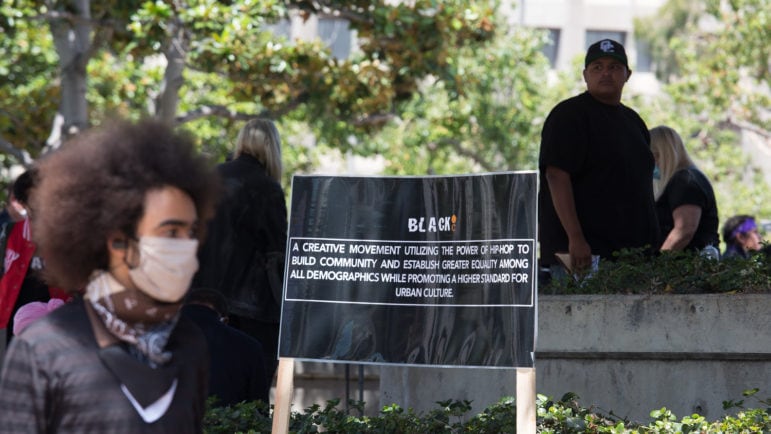 The mission statement of Black OC, the organization behind the vigil. 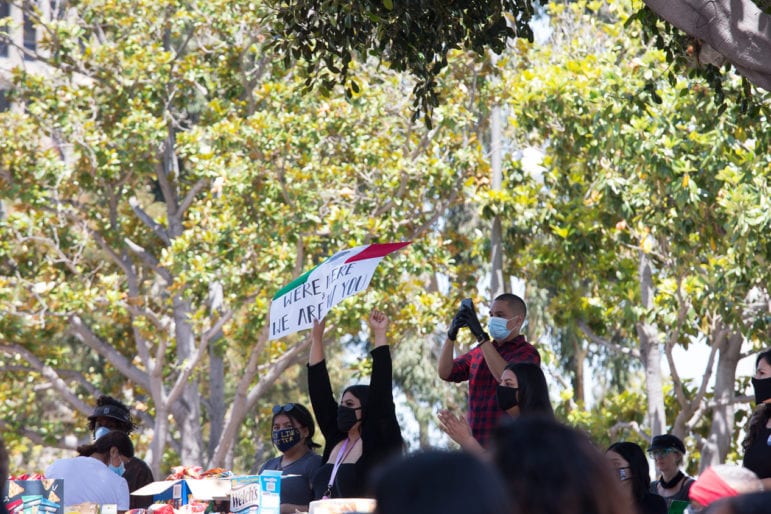 During the speeches an organizer calls for an alliance between all races, especially Black and brown in the city of Santa Ana. A woman holds her sign up, agreeing, on June 19, 2020.

Brandon Pho is a Voice of OC staff writer and corps member at Report for America, a GroundTruth initiative. Contact him at bpho@voiceofoc.org or on Twitter @photherecord.