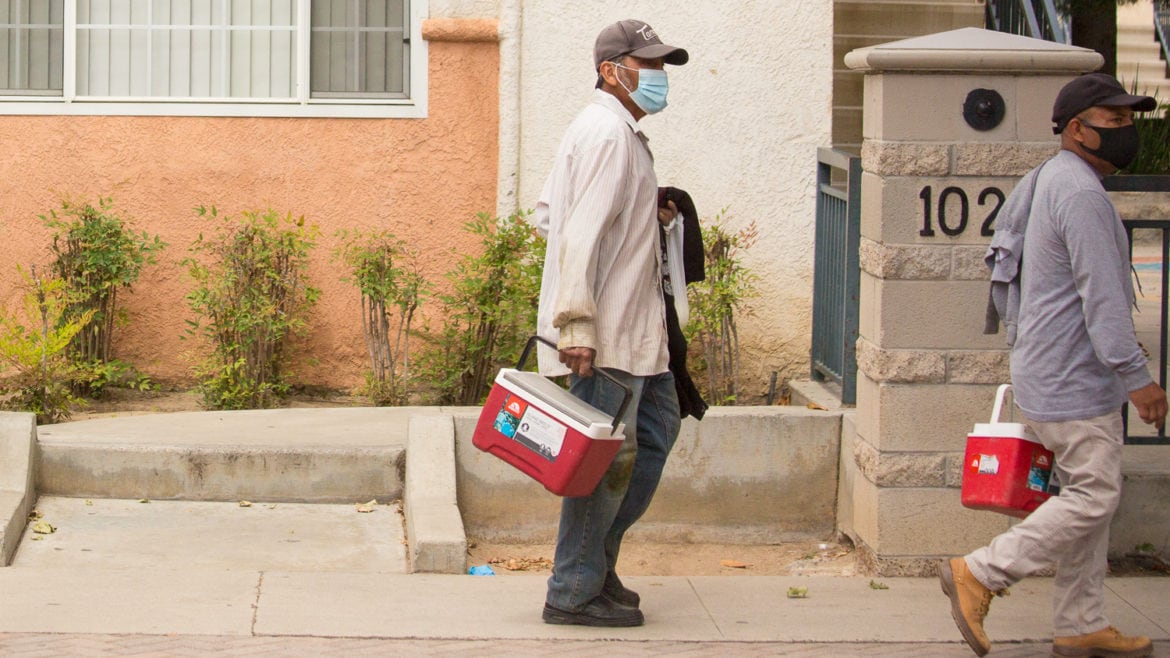 OC officials said enacting a mandatory mask order would be the last line of defense against state officials again closing down large swaths of the economy if virus case counts see a dramatic spike.

“We don’t have a vaccine, the treatments are marginally effective at best and in very short supply. We have to do the best we can to just prevent it — that means social distancing, masks, quarantine, contact tracing. That’s all we have to protect the majority of people, particularly the most vulnerable,” Cesario said.

Former Health Officer Dr. Nichole Quick issued a mask order late last month as dine-in restaurants and shopping centers were reopening. But she faced blowback from Supervisors and residents on the order.

OC Health Care Agency Director, Dr. Clayton Chau, took over for Quick after she abruptly resigned following a series of threats, including one during a public meeting that Supervisor Michelle Steel deemed a death threat.

Chau walked the mandatory mask order back last Thursday and masks are now a strong recommendation.

The Orange County Medical Association condemned the County’s handling of the mask situation.

“We think the mandate should have stayed in place and we came out very strongly the night after Dr. Quick resigned — understanding that she resigned because of the numerous personal threats on her and her family, which we find disgusting to say the least,” association executive director Jim Peterson said in a phone interview.

“Our stance is that public health policy should be made by public health experts and that facts and science should override political considerations, even though we all know that is a reality,” Peterson said.

The Buena Park-based United Food and Commercial Workers Union Local 324, which represents more than 22,000 grocery and other service employees, is calling on cities to require masks.

“It is irresponsible to take such action as businesses start to reopen, and as COVID-19 cases continue to rise. It is a critical time and Orange County needs to take a stand for what is right for the sake of our communities. We will continue to call on our local cities to lead where the county won’t,” said local union president Andrea Zinder.

The multinational entertainment giant released updated health guidelines Monday, mandating all employees and customers are required to wear cloth masks inside the park. Everyone will have their temperatures checked before entering Disneyland or California Adventure.

Because of all the business closures, Anaheim is facing a projected $75 million budget shortfall this upcoming fiscal year and is expected to make citywide cuts.

“The shutdown has impacted so many workers and businesses. You can help by visiting your favorite Anaheim restaurant and store. And soon our theme parks and hotels. But we need to be safe and very responsible,” Anaheim Mayor Harry Sidhu said in a Facebook video.

“We urge everyone to wear a face mask, keep social distance and do everything we need to do,” he said.

Cesario said cases are on the rise in OC and the state.

“My feeling is this. I got to tell you the epidemic has not gone away. You look at the California curve, it keeps going up. Orange County had the highest single day this weekend for new cases,” Cesario said.

This past Sunday saw 299 new cases in OC, the highest daily increases recorded so far.

Meanwhile, the virus has now killed 243 people out of 9,197 confirmed cases, according to Wednesday’s updated numbers from OC health officials.

There are 300 people hospitalized, including 137 in intensive care units.

Nearly 4,200 people have recovered so far, and just over 187,000 tests have been conducted throughout OC, which is home to roughly 3.2 million people.

Cities with large working class neighborhoods, like Anaheim and Santa Ana have been hit hardest by the virus.

Taken together, the two largest cities account for 40 percent of the total cases in OC.

Some are questioning whether or not Disneyland is reopening too quickly.

Nearly 40,000 people, and counting, have signed an online petition to halt Disneyland’s reopening. The petition, started by an anonymous group, cited concerns over the rising virus deaths, hospitalizations and confirmed cases.

“We have to take into consideration the problem remains. I do understand that people have to get back to work,” Cesario said. “If that is the case, you have to make accommodations — which is social distancing. And if you can’t social distance you absolutely have to wear a mask. I think if they can’t do that, they shouldn’t let people in.”

Disneyland employees have also reached out to Voice of OC, sharing similar concerns.

“I’m concerned about the training aspect, because it’ll be about four months since anyone’s touched an attraction,” one employee said. “I think we’re opening up too early.”

They also said there’s been no communication from managers or the union on potential retraining employees for best practices during the pandemic.

Councilwoman Denise Barnes said the union should get involved and work with Disney to address employee concerns.

“I’m no mind reader and if the cast members and employees need reassurance, then I would hope that their union and own company would give them that reassurance. And I would also look for the County to put their blessing on it also,” Barnes said.

And Disneyland’s phased reopening, which the company hopes to begin July 9, also needs a blessing from state health officials before its official.

Cesario said he understands the need to reopen Disneyland.

“It would be better if we didn’t have to open it up, but with economic pressure, I understand the need to do that.”

Peterson said other parts of the country have shown the dangers of reopening too quickly.

“What we’re seeing right now in our country is the number of states and counties who, on Memorial Day, relaxed restrictions. And we’re seeing what’s happening there in Texas, Arkansas and Florida,” Peterson said. “They’re having to pull back because numbers are climbing, drastically. So they’re having to rethink these policies.”

He said the same thing could happen in OC if safety measures go unchecked.

“We’re a little considered from the physician community that we might have to do the same thing as well and that is going to be a very heavy lift in the community.”