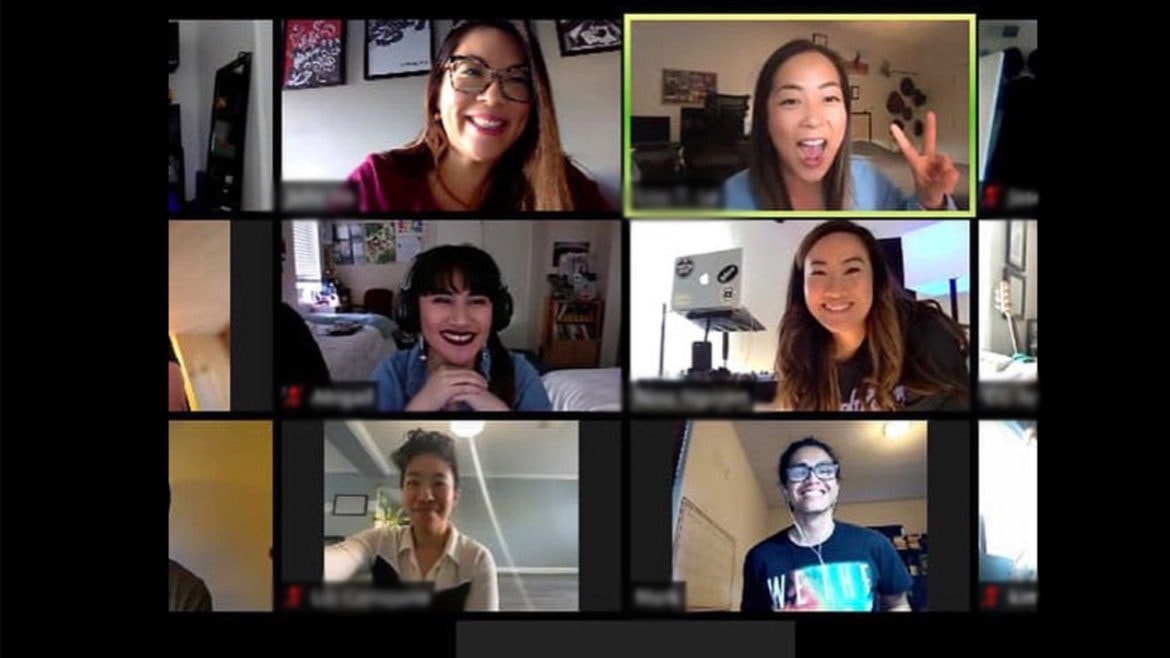 Viewers and participants in Common Ground OC’s Zoom open mic on May 1, 2020.

A soothing sound radiates through the 4th Street Market’s patio in downtown Santa Ana. To some, this is a spiritual place. To others, it is the best jamming joint in town. But to the community of people that have gathered here every Thursday night for the past three years, this popular open mic space is where they call “home.”

The Coollab Project, which hosts the weekly event at 4th Street, has developed a hub for local musicians to learn, grow and connect with one another. It’s providing a stage for artistic expression, but more than that, an unconditionally supportive family of music and poetry lovers.

Lusty rounds of cheering used to follow the performance of Coollab’s house band, Apollo Bebop. But since the coronavirus made large gatherings unsafe, Thursday nights on 4th Street are marked by a desolate silence that mutes this lively celebration of art, culture and community.

As of March 18, The Coollab Project’s live sessions have been postponed until further notice. Instead, the organizers have decided to take their Thursday nights to Instagram live in an effort to maintain some sense of normalcy during this social distancing period.

Rocky Angelini, The Coollab Project’s host for the past year and a half, said that while nothing can compare to live experiences, this virtual platform allows artists and viewers to check in and connect with one another.

“Being cooped up has (put) a lot of strain on our mental health,” Angelini said. “I think it’s really important for us to be able to still come together and be able to communicate how we are doing and laugh and smile and feel inspired.”

Angelini has been practicing what he preaches at every virtual session, with his room as his stage and his phone as his mic. Hyping up a crowd he can’t see isn’t easy, but Angelini never looked an inch out of his element as he laid down the foundational rules that Coollab veterans repeat at every open mic and have have etched in their hearts:

Rule #1: Everybody gets love

Where Angelini would normally be getting to know the crowd during his downtime, he now asks viewers during the Instagram live streams to be present through the comments instead. He also encourages viewers to show their support by following the performers’ socials and music and purchasing their merchandise.

“And I always tell people, if you don’t have any money, energetic currency goes a long way,” Angelini said.

The Coollab Project is not alone in its virtual endeavors to uplift and unite the community.

Though it ran only until 2017, the pandemic reminded Common Ground organizers of a reason to revive it as a virtual event.

“People are feeling like they need to find meaning in this moment or need that social connection in their daily lives while being stuck in one place,” said Christine Tran, one of the organizers of Common Ground.

Three years after its last show, Common Ground open mic launched on Zoom for its first reappearance and virtual session on May 1.

Unlike Instagram live, Zoom allows viewers to interact with video and audio. Those who performed were not only met with generous words in the chat room, but also shouts of praise and rounds of applause through their computer screen.

But as Angelini said, these virtual spaces aren’t sufficient substitutes for a live event. As an artist herself, Tran said that these social platforms, while great for connecting, don’t allow performers to test the room. In other words, it is difficult to assess the audience’s positive or negative reactions.

On the other hand, the physical limitations that prevented a chance to be on stage are now an issue of the pre-pandemic world.

“I remember not being able to make it in time for a Common Ground open mic in 2016 and being really bummed out by it, wishing I could stream it,” Tran said. However, with the virtual platforms that have become available, now she can.

Liz Cartojano, a dancer who performed at Common Ground’s virtual open mic, did an improv performance to the acoustic version of “Latch” by Sam Smith. She chose this song specifically to express the things that people miss and are looking forward to when the pandemic is over.

“I wanted to dance about that human connection that we want to latch onto but we can’t right now,” Cartojano said. “It’s a good thing that virtual events exist so that we can feel like we are not alone in this situation.”

Both Common Ground and The Coollab Project have shown resilience in this time of crisis. Rather than let themselves and others feel alone, they formed an environment where community members can share their creativity.

While these organizations were forced to adopt virtual platforms, they created a way to engage and express. For as long as there are no physical gatherings, these live streams will become people’s sanctuary.

Common Ground is hosting its next virtual open mic on June 18, and is aiming to continue open mics on the first Friday of every month.

The Coollab Project is continuing its weekly open mics on Instagram live every Thursday, keeping the momentum up in preparation for the day its members are allowed to safely return to 4th Street.

Vinson “ALäZ” Muhammad, founder of The Coollab Project, is determined that he and his organization continue to thrive despite the circumstances. And when they arrive at the post-pandemic future, he is excited to grow and create with people once more, not from a distance, but together.