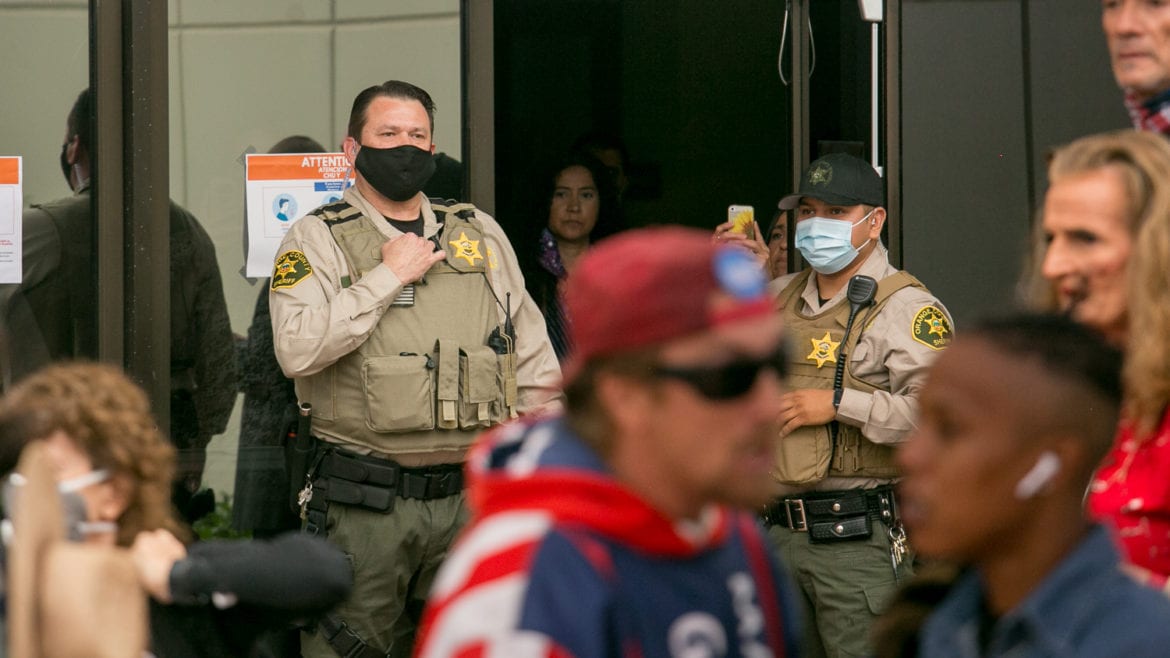 It remains unclear how or if the statewide coronavirus mask mandate will be enforced in Orange County, after County Supervisors on Tuesday declined to address any enforcement approach, despite numerous residents either advocating for it as well as lobbying against it.

Last Thursday, Gov. Gavin Newsom called on the California Department of Public Health to update its guidelines, which now require all Californians wear masks when in public places.

While other Supervisors, at their Tuesday meeting, questioned OC interim Health Officer Dr. Clayton Chau about virus hospitalization numbers and contact tracing, Supervisor Doug Chaffee was the only one mentioned the masks.

Chaffee recalled his conversation with former Health Officer Dr. Nichole Quick, who resigned after a wave of threats and protests in front of her house following her mask order Memorial Day Weekend.

“What good does it do if the order is not enforced?” Chaffee said.

Chau responded, “Even the CDC recently has changed their tone and said that wearing a face covering … can help limit the spread of the virus. So, in my opinion, I’ve always said that it is important to wear a face covering when you are outside and cannot keep six feet away from people.”

Quick stood firm on her mask order until her June 8 resignation, then Chau took her position over.

He stood by Quick’s order until he walked it back to a strong recommendation June 11.

“I think that we need to be guided by medical science and sometimes politics clash with that, so be strong,” Chaffee told Chau at Tuesday’s meeting.

Meanwhile, the virus has now killed 273 people, including four new deaths Tuesday, out of 10,737 confirmed cases, according to the County Health Care Agency’s updated numbers.

Nearly 5,200 people have recovered and nearly 224,000 tests have been conducted throughout OC, which is home to roughly 3.2 million people.

Supervisor Don Wagner questioned Chau on Tuesday about how the hospitalizations are reported.

Wagner asked Chau if a person who’s infected, but asymptomatic, goes to the hospital for something like a heart attack or falls down the stairs would be reported as a hospitalized virus case.

“Are the hospitals separating out for us?” Wagner said. Those people going in for respiratory problems … as opposed to say appendicitis or a fall?”

Chau responded, “They don’t … but that number is actually low in Orange County.”

Although, Chau didn’t have the exact number.

Chau said he’ll try to get those numbers separated out of the total counts.

“So I have to ask the hospital association to see if we have cooperation on that.”

OC Sheriff Don Barnes wasn’t at the Supervisors meeting and no County official mentioned how the new statewide mask mandate will be handled by the County.

While Barnes hasn’t publicly said anything about the statewide coronavirus mask mandate, he did say he wouldn’t instruct deputies to enforce Quick’s mask order. Instead, deputies would take an educational approach, Barnes told Supervisors at their May 26 meeting.

During Tuesday’s public comment portion of the Supervisors meeting, competing factions of residents showed up: a pro-mask group and an anti-mask group.

Last week, Supervisor Don Wagner told Voice of OC the pro-mask residents have been silent until Quick’s order was walked back by Chau a couple weeks ago.

Anaheim resident Vern Nelson told Wagner the pro-mask people didn’t want to be near the anti-mask people because they feared catching the virus.

“We haven’t been silent. We just don’t want to be near these anti-mask zealots’ Nelson told Wagner.

Numerous people who were against the masks told Supervisors there is no science to back up the masks and the virus is being overblown by the media.

Others said it should be their choice to wear masks or not and a statewide mandate is government overreach.

Shortly after Chau walked back the order, an online petition was started to reinstate the County mask order. It’s at roughly 40,000 signatures as of Tuesday.