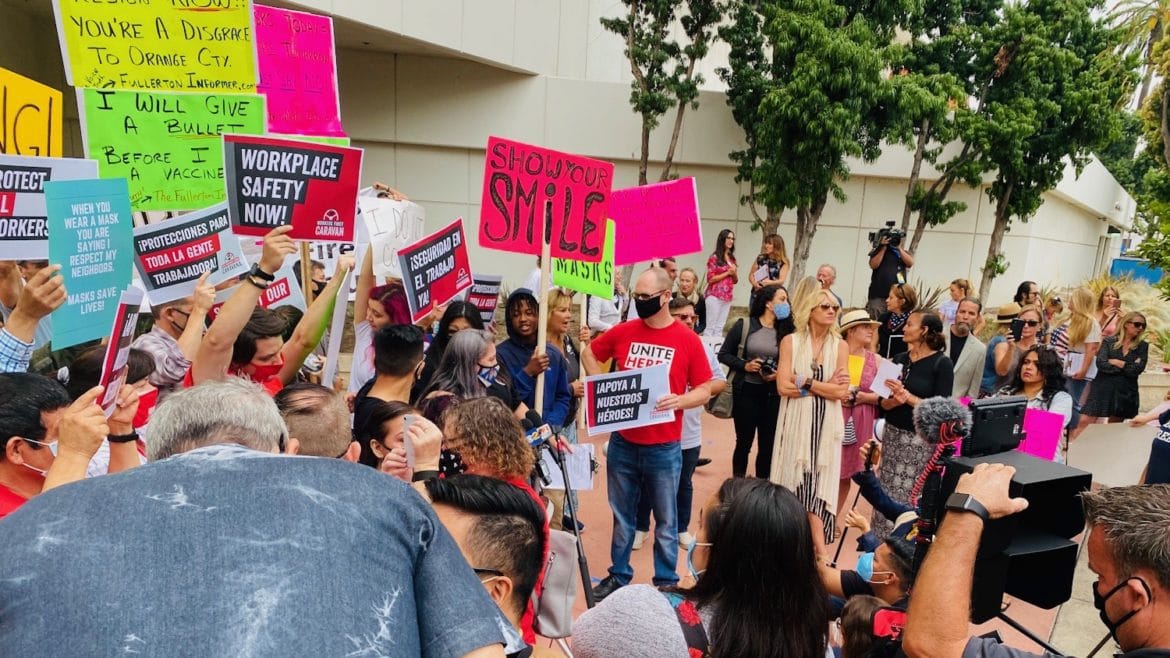 Orange County’s seeing an increasing community debate over whether or not there should be a mandatory mask order in place after calls from the OC Democratic party and labor leaders to reinstate the order.

Various Orange County union representatives and the OC Labor Federation tried to hold a Tuesday press conference calling on County officials to reinstate the mask order during the coronavirus pandemic, but an anti-mask crowd shot down their efforts.

“We tried completing most of it, unfortunately folks were trying to shut us down. They were asking to be heard, is what they were saying. Evidently they didn’t want us to be heard. They were shoving and pushing us. They seemed like they were more interested in silencing us then having an actual discussion,” said federation project leader Luis Aleman.

The anti-mask group was at the Supervisors’ special meeting Tuesday and nearly got the meeting shut down because they repeatedly brought up the masks during a John Wayne Airport closed session item on Hertz rental car declaring bankruptcy.

“They were shoving and hitting us with their signs,” Aleman said.

He also said some older people were there to speak, but were pressured out of the news conference by counter-demonstrators.

“They actually had to leave, people kept invading their personal space, trying to get them to take off their masks, shouting at them,” Aleman said.

Chau walked back the order last Thursday and masks are now strongly recommended.

Quick resigned earlier this month after a series of questions from Republican Supervisors Michelle Steel and Don Wagner over her mask order and pushback from residents. Some people made threats against Quick, with Steel classifying one of them as a death threat.

Ada Briceño, chairwoman of the OC Democrats, has been criticzing County Supervisors over the past week.

“Frankly I’m furious. I’m upset that we are not mandated to wear these. These will save our lives at this moment,” Briceño said in a Monday Facebook video. “It would help us move forward in this pandemic. And unfortunately Orange County will not mandate these.”

She said a mandatory mask order would give people confidence to go out and shop, helping revive the economy.

Wagner responded to some of the criticism leveled against him and Steel.

“Ada Briceño and the Democrats and their supporters whipping up questions about Michelle and I is just pure political theater and not worth too much care or concern,” Wagner said in a Tuesday phone interview.

He said nobody advocated for mandatory mask orders leading up to Quick’s initial order.

“Those people who are complaining about the lack of a mask mandate have been strangely silent during the first 10 weeks of this pandemic,” Wagner said. “We had it (the order) for about 10 days and suddenly Ada Briceño and her fellow travelers are going crazy.”

Briceño said Supervisors are ignoring the issue, in a Tuesday statement emailed to Voice of OC.

“Ignore, ignore, ignore — that seems to be all the Republican-led Board of Supervisors can do these days. The Board’s handling of this pandemic is disastrous, chaotic, and dangerous. The Board should stop using divisive rhetoric and start fixing the problem,” Briceño said.

“Today we’re sending 3,000 signatures to the Board asking them to reinstate the mask order and listen to health experts. Let’s hope they listen,” Potucek said.

Aleman criticized Supervisors for giving into the anti-mask crowd, which has been attending every meeting since Quick’s order was issued.

Meanwhile, the virus has now killed 233 people out of almost 9,000 confirmed cases, according to Tuesday’s updated numbers from the County. There were also 300 people hospitalized, including 137 in intensive care units. Nearly 4,200 people have recovered and over 187,000 tests have been conducted throughout OC, which is home to roughly 3.2 million people.

During Tuesday’s Supervisors meeting, many people thanked the Supervisors for pressuring Chau to walk the mask mandate back.

“We never pressured Dr. Chau,” said Steel, responding to public comments. “Don’t say we pressured him, we asked him questions.”

It was the first meeting since the pandemic began where there was no virus update. Usually, Supervisors hear updated case counts from Chau and other County officials on efforts to reduce the virus spread and what services are being provided to residents impacted by job losses because of the business closures.

The only item on Tuesday’s agenda was the closed session Hertz rental car company declaring bankruptcy and its impact on John Wayne Airport.

Officials repeatedly clarified the public comment period was for hte Hertz bankruptcy only.

“In case you people can’t read our item, it says other anticipated bankruptcy cases involving the County of Orange and John Wayne and creditors,” Supervisor Andrew Do said. “Complete the sentence. Don’t just take words out of the sentence and try to hijack this meeting.”

When Steel would try to refocus the topic, yelling could be heard from the conference room where public comment is taken during the pandemic.

“Can we have that room under control. It seems like they make a lot of noise and we can’t turn the microphone on,” Steel said.

Steel threatened to recess the meeting and eventually heard all of the public comments from roughly 30 people.

“Everybody is warning that the disease may come back at some point and I’m looking to see the County of Orange has tools available … short of shutting down the economy again, to deal with the resurgence,” Wagner said.

He noted the CDC, California Department of Public Health and the World Health Organization all strongly recommend masks and not require them and Quick didn’t take that into account when she mandated the masks.

“We need to reopen safely, and masks are crucial to that. Health experts and the vast majority of the public support masks, and our Board of Supervisors could be listening, but they seem uninterested in doing so.”