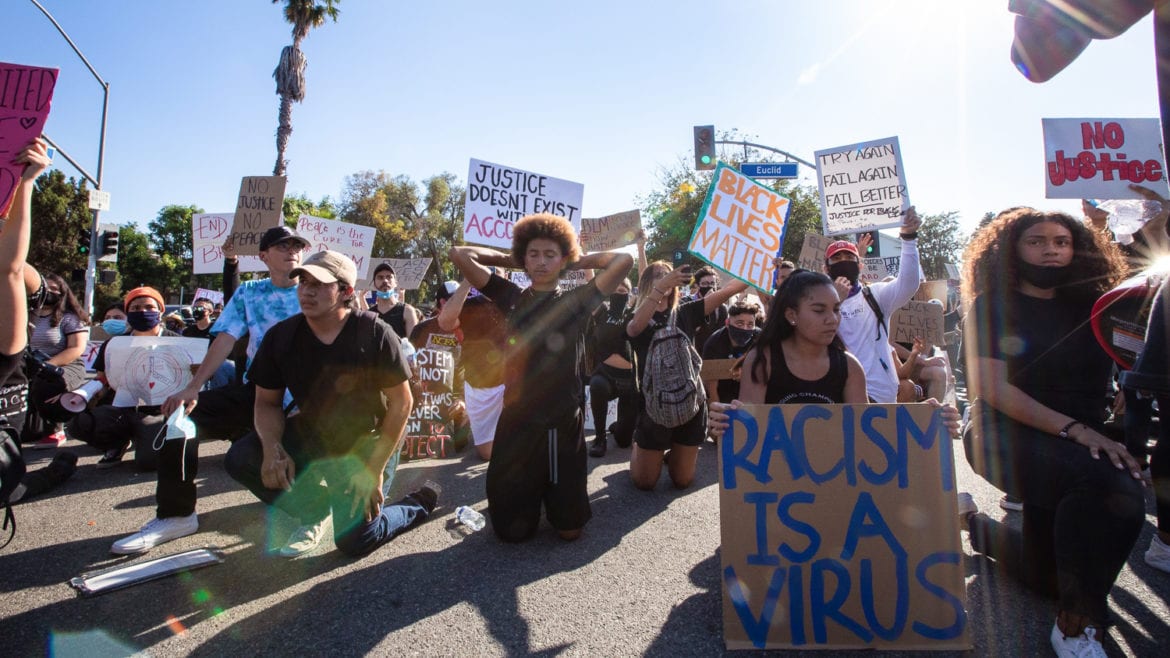 Protestors during the Garden Grove protest on June 3, 2020.

Orange County Supervisors on Tuesday formally took a stand against police brutality when they adopted a resolution condemning the Minneapolis police killing of George Floyd, a Black man, who was killed by a white officer on Memorial Day.

“As systemic racism continues to plague the United States of America, I believe we at the County of Orange need to stand in solidarity with the Black Lives Matter movement,” said Chaffee, the panel’s lone Democrat..

He suggested the change to Supervisor Don Wagner, a Republican, who brought the original resolution forward. While Chaffee’s proposal didn’t gain any traction with his colleagues, nobody disputed the addition of Black Lives Matter, either.

Wagner and Chaffee briefly debated over whether the resolution would state Orange County stands with the Black community or the African American community.

Chaffee said Black people could be from other countries and wanted to also include them.

“We would not like to leave them out,” Chaffee said. “The other item (Black Lives Matter) I know could be at least controversial.”

No other Supervisors mentioned the Black Lives Matter movement and Chaffee didn’t further push the matter.

Chaffee and Wagner were the only two Supervisors to discuss the resolution.

Roughly 50 protests have taken place throughout OC since late last month, joining demonstrations around the world after former Minneapolis police officer Derek Chauvin killed Floyd when he jammed his knee to the back of Floyd’s neck for nearly nine minutes as other officers looked on. Four officers have since been charged for the Memorial Day killing.

“The horrible injustice that was done in Minneapolis by folks who were abusing their position as police officers,” said Wagner, when he introduced the resolution. “It has rightly incensed so many people around this country who are now taking to the streets in protest of that violence. But it is also important … to recognize that there are good men and women on the frontlines of law enforcement.”

OC Sheriff Don Barnes told Supervisors his deputies would never jam their knees to the back of an arrestee’s neck.

“I’d never seen that so-called technique that was used in Minneapolis. That was the first time I’ve seen anything like that. That is not a technique that we train here in Orange County … nor it is anything I would condone.”

Barnes said if one of his deputies performed the “very deliberate action to stop the airflow of Mr. Floyd, I would have walked him straight to the District Attorney’s office for filing.”

“That is something that would not ever be condoned and should be condemned, quite honestly.”