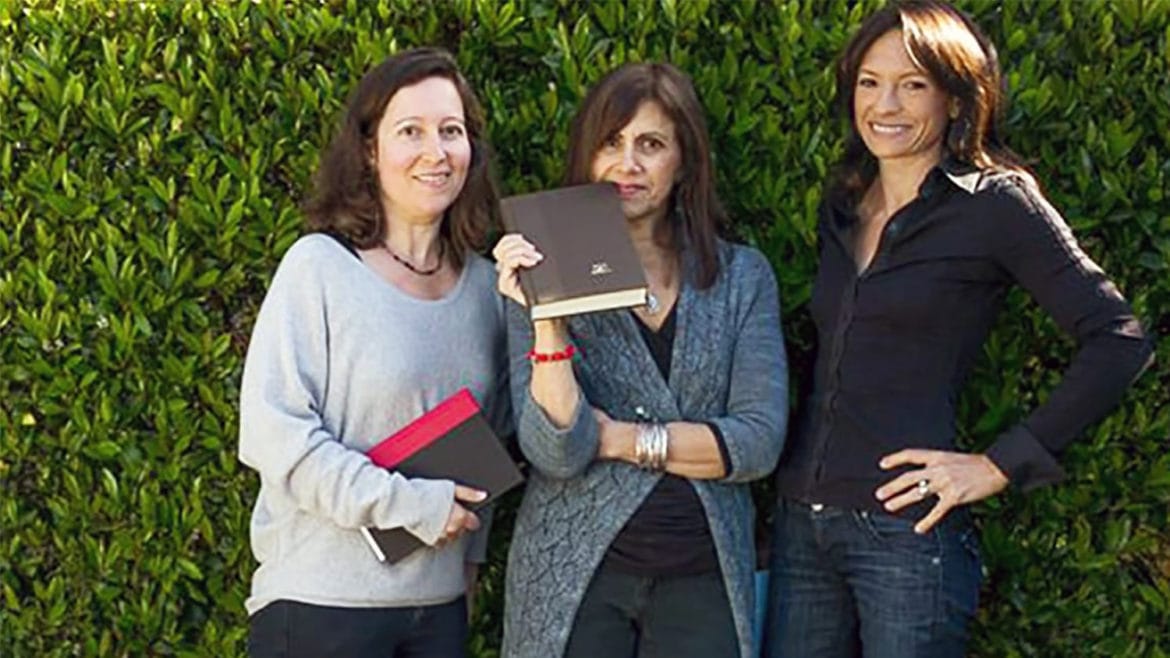 Photo courtesy of Writers on Writing

The hosts of Writers on Writing, a weekly radio show on KUCI. From left, Nicole Nelson, Barbara DeMarco-Barrett and Marrie Stone.

He was talking about his decision to leave a lucrative chair at the University of Memphis to take a post teaching in the MFA writer’s program at Chapman University, and the shadows of doubt that went along with it.

Who can blame him? Orange County for the literary life? Sun-kissed Byzantium of the young in one another’s arms, Newport fashionistas, Chardonnay-swilling housewives bitching at each other on TV, and a meticulously commercial amusement park that bills itself as the happiest place on earth?

Orange County does have its fissures, in which identity defines itself through mild resentments. The 949 crowd looks down on the 714 crowd. South County is dismissive of North County, which is baffled by its southern neighbor’s aloofness. People who live west of the 405 are indifferent to the realities of the people east of the 405.  The universal problem of homelessness has taken root here.

However: “That was a stupid idea,” said Bausch, of his notion of the transplanted writer packing his cooler and shuffling off for a lifelong snooze behind the Orange Curtain.

To the casual observer, the main sources of Orange County literary identity are found in the famed MFA Program in Writing at UC Irvine, and in the legendary efforts of Barbara DeMarco-Barrett, in her long-running Writers on Writing weekly radio program on KUCI and her monthly literary salon in Lido Isle. Each is renowned.

But a mere scratch of the Orange skin reveals a teeming literary life underneath. Readings, conferences, panels, workshops and discussion groups take place regularly throughout the county—or did before the pandemic drove us indoors (and it’s still easier to order and read a book, and meet together on Zoom, than it is to go anywhere).

For openers, there is the Southern California Writers Association, whose Program Chair and chief talent wrangler (as she bills herself), Madeline Margarita, brings in noted authors like Rufi Thorpe to address a membership of 150 over an informal meal (Thorpe is author of the well-received “The Knockout Queen,” set in Corona del Mar). Writer’s conferences and seminars are also on the association’s docket. A mailing list of thousands includes writers from all genres.

Margarita also hosts Lit Up! OC, a writer’s salon in Tustin (it has a Facebook page), and the podcast, “Character Floss,” which airs on major podcasting platforms.  Lately, they’ve been holding their salons virtually on Zoom and are likely to continue doing so until its safe to convene together again.

There is the OC Writers Critique Group in Lake Forest; the Orange County Screenwriters Association in Irvine; a branch of the California Writers Club that meets in Orange’s Public Library; a Sisters in Crime chapter in Huntington Beach; a welcome annual free-for-all literary fringe fest called Boca de Oro, including open mic nights, that happens in Santa Ana; a Young Adults writer’s group in Fullerton; and a Poets and Dreamers series that, like “Guys and Dolls’” oldest established permanent floating crap game, touches down in various O.C. sites.

A number of O.C. libraries chip in for the annual writers’ and readers’ lovefest called Literary Orange, where 500 or more attendees pack hotel banquet rooms to honor the word. The Witte Lectures series at the Newport Beach Library packs in heavy hitters like The Atlantic’s David Frum and former Michigan Governor Jennifer Granholm. Philip K. Dick, that most metaphysical of sci-fi writers, died in Santa Ana; Cal State Fullerton has his archive.

There are other, smaller programs as well, all on hold until the coronavirus decides its work here is done.

A Happy Place, But Is It Inspiring For Writers?

The question, however, is what does all this activity portend? Does anyone think that Orange County, like Paris in the ’20s, is the place to be for the serious and ambitious young writer who wants in on civilization’s conversation with the new? Every instructor, observer and MFA participant I spoke to marveled at the level of vitality and talent that convenes here. But still, la vie bohème doesn’t seem a good fit in the land of the gated community, whose principal engagement with the world is squeezed through cable.

“There are the academic MFA programs, university based, that don’t always engage with the community; and people who don’t care about literature with a capital L, and just want to write commercially and make money. You’ll see that with Sisters in Crime and Literary Orange.

“The third branch is the Boca de Oro festival and spoken-word events. Boca started in 2017 and is designed to bring regional voices into one event. It hasn’t been entirely successful in that regard.

“The thing to remember,” Romanowski cautions, “is that there’s an inherent tension between writing and community. Writing is a private, lonely, quiet thing. When you’re talking about a writing community, it’s about people finding each other in the world.”

Poet Marcus Omari is based in Santa Ana but is one of those figures you’d hope to find in any geographical setting, by virtue of a fresh, instantly recognizable talent for painting brilliant word pictures and delivering political messages with the casual charm of Denzel Washington’s Easy Rawlins. He’s a naturally engaging figure.

But his fame, such as it is, is derived mainly from word-of-mouth, and with the demise of the OC Weekly, it’s harder to find performance venues with open mic nights.

“Everything in Orange County is segregated in shallow differences,” he says. “But the thing I care about most is where I can do poetry, where I can find art, because art is above all that. It isn’t segregated. Orange County has the people to do incredible things here if they’re willing to dig in. But it’s a challenge.”

All roads in a sprawling landscape seem to lead to Orange and Chapman University. Idiots Peddling Poetry at the Ugly Mug was the site of one of Omari’s first gigs. The 1888 Center is a vibrant meeting place for all things literary. O’Hara’s Pub is where Bausch occasionally meets with celebrated colleagues, James Blaylock and Tim Powers, pioneers of the steampunk literary genre.

“When you look at the graph of the college’s growth and all the various awards and forms of support for writers,” says Bausch, “the line looks like the rising of the temperature in a kiln. It’s stunning.”

Great writers usually work out of the conditions of place, like James Joyce’s Dublin or Philip Roth’s Newark. Orange County lacks a deep history, and it hasn’t experienced violent social upheaval and the kind of  suffering that leads to a hard, basic assessment of being alive. It really is largely a happy place, a lot of it glowingly beautiful, and still in cheerful thrall to America’s unbounded faith in capitalism and technology. But how is that faith expressed in the administration of political justice, in the treatment of the natural landscape, in the arts, in the life of the soul as people try to get through the day with a sense of purpose and meaning?

There are a lot of stories in these questions. Orange County’s coming of age as a place of regional literary identity gone wide, like Faulkner’s Mississippi of Willa Cather’s Great Plains, still waits to be written.

Lawrence Christon is a contributing writer for Arts & Culture at Voice of OC. He can be reached at [email protected].