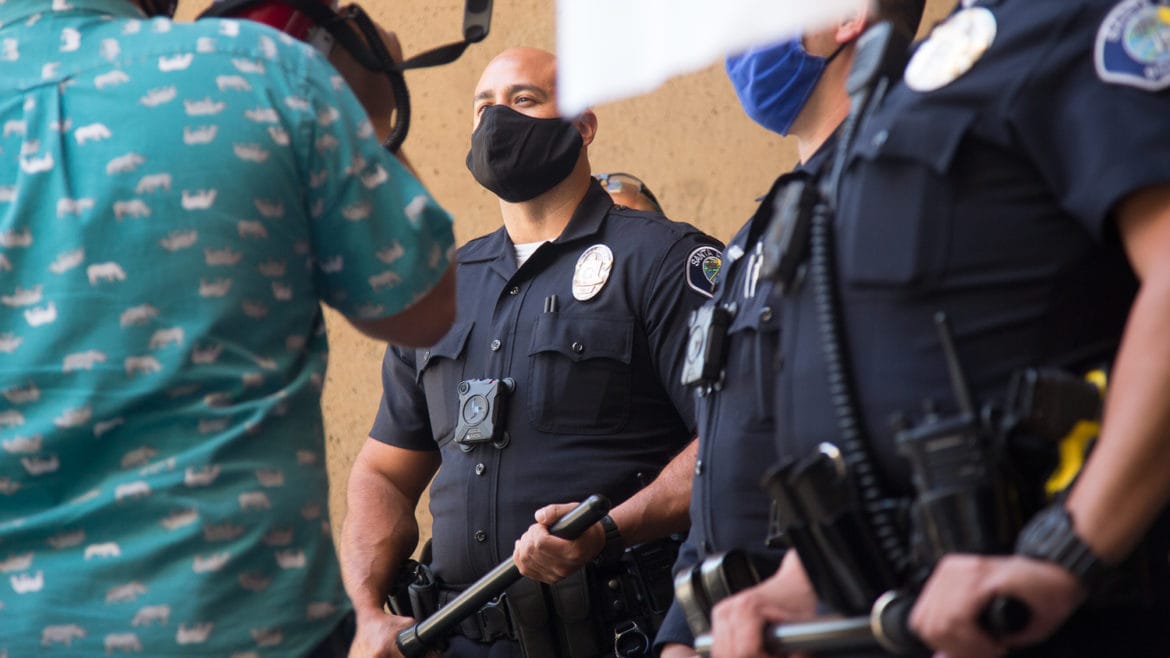 Santa Ana City Council members late Thursday night approved a $9 million police spending increase for the next fiscal year along with the rest of the city budget in an initial vote, despite hundreds of public comments calling on them two days earlier to spend that money elsewhere.

The police department is on track to receive a $140 million city spending allocation for the next fiscal year, continuing the department’s streak of getting top priority for taxpayer dollars over other city departments like Parks and Recreation and Library Services.

Council members at Thursday’s meeting — continued from a prior one on Tuesday that council members ended after receiving hundreds of public comments through emails and phone calls — approved the first reading of the budget on a  5-2 vote, with council members Vicente Sarmiento and David Penaloza opposed over the police increase. No members of the public got to speak before the discussion.

Public anger came to a head later in the meeting as council members got to a discussion of a much-anticipated police oversight board. After hearing five public comments dialed in by callers over the phone, the discussion turned to council comments. Then it turned out that more than 20 callers wishing to speak had been backlogged through a technical error, and the number of callers joining the queue grew by the second.

Mayor Miguel Pulido, reluctant to go back to public comment, agreed to hear the rest of the callers — more than 30 waiting in line by that point — but restricted them to one minute.

Given the fact that the prior budget hearing had been sliced in half between public comments on Tuesday and council comments and a vote on Thursday, public furor ensued over the new restrictions.

Residents like Indigo Vu couldn’t get through their remarks without exasperated sighs: “You’re being embarrassing … You can’t just do this — you can’t just silence us … the police oversight committee is the least you can do … if you can’t do your jobs then you have to at least listen to us.”

Eventually Pulido relented, easing the speaking restriction to two minutes. But then he asked residents to state their addresses before speaking.

Retorted one caller in Spanish, “If the Mayor wants to send over some money, then I’ll give him my address.”

“I am very sorry to the royal Mr. Pulido that I’m coming up and taking two minutes of your time away from you,” said one caller, Karla Ortiz, who said she feared Thursday’s discussion was merely performative and that any real oversight board would be “ignored and possibly discarded.”

“Meet our demands or be removed from office,” Ortiz said.

The commission was placed on the agenda by council members Phil Bacerra, Penaloza and Sarmiento. 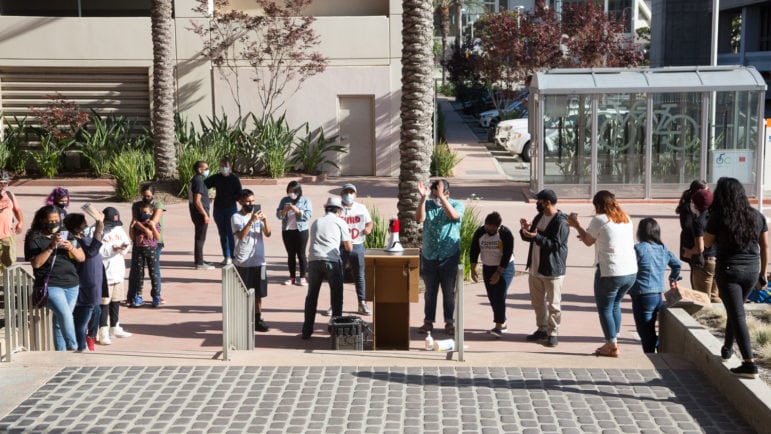 Activists gather for a news conference on a “People’s Budget” outside City Hall on Thursday.

Bacerra said he supported discussing the commission “not because we have a department full of officers acting like Minneapolis police officer Derek Chauvin (the officer filmed killing George Floyd, a Black man, in an event that sparked national uproar)” but because “Santa Ana needs the entire community to keep the peace and prevent crime.”

He directed staff to research what kinds of commissions were in place for other cities comparable in size to Santa Ana, among other variables, and to come back to the council 90 days from Thursday — which would be the council’s Sept. 15 meeting. “This situation, this item is too important not to take enough time to do it right,” rather than “opine tonight on what we believe the commission should look like.”

Penaloza said he’d be “interested in seeing all of the above included … what subpoena powers would look like … an investigative authority … I want to see it all presented, given the police department takes up over 40 percent of our budget.”

Public commenters were in agreement that subpoena powers and investigative authority would be needed for any real, meaningful oversight commission.

Jennifer Rojas of the American Civil Liberties Union (ACLU) of Southern California during public comment also said the commission “must exclude current and former city employees and police officers, and must include representatives from communities most impacted by police violence.”

Council members like Jose Solorio — who had defended the police department and its large allocation of money throughout the Tuesday and Thursday meetings — seemed less interested in the idea. “I would instead ask we consider new ideas and approaches.”

Still, he said he’d be “interested in seeing what kind of powers (other cities’ commissions) have, how many members they have, who the appointers are, what the cost is to administer, and where in the organization that commsson fits … I would ask my colleagues and staff that we also look at some things that are actionable today and some of these things can be done fairly easily and are cutting edge.” He pointed to council members as resources for getting information on police misconduct.

While Councilman Juan Villegas — a law enforcement officer himself — said cops “do need to be held accountable and I do agree with the public because there are some people who should not be wearing a uniform out here,” a “vast majority of officers are out there are great officers.”

Villegas said he would instead be more interested in a “Chief’s advisory board,” rather than a citizens’ commission with investigative powers.

During a discussion on the budget, Solorio defended the police department by having Chief David Valentin list off statistics of officer-involved-shootings decreasing over the last couple of years.

Valentin also said the department is increasingly trying to incorporate civilian staff with limited police powers in place of officers, wherever applicable — a practice he referred to as “civilianization.”

“We look for any opportunity to do that,” Valentin said.

Satisfied by Valentin’s statements about the department, Solorio during the budget discussion said the city was headed “in the right direction.”

That’s not how residents like Marlha Sanchez see it.

Sanchez in public comment for the police oversight commission recounted an incident where a white woman called the cops on her and her kids while walking along a street, where Sanchez said police officers handled her children roughly and treated them and her unfairly.

Roberto Herrera of Resilience OC, during a press conference on the steps of City Hall before the meeting, tied it to a regular occurrence where “Karens” — white people or people of color who call the cops on other people of color for “existing” — criminalize people of color and youth in Santa Ana, especially downtown where there are businesses and storefronts.

“This is now on your conscience to do something different for our city,” Sanchez said. 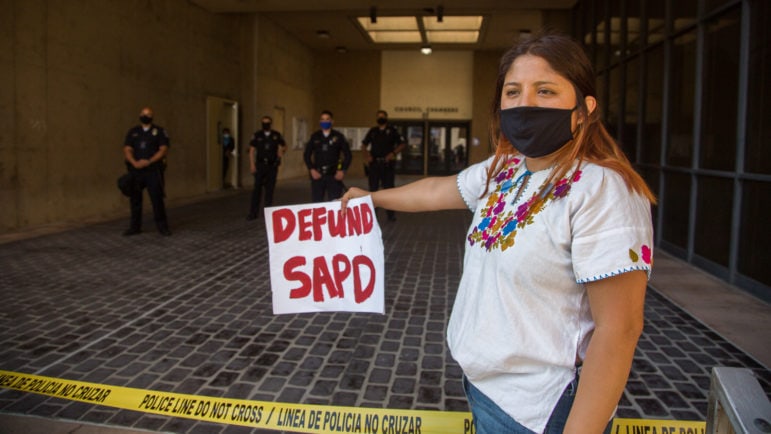 Council members at Thursday’s meeting refrained from joining in hundreds of public commenters in calling for a defunding of the police.

Sarmiento, supporting the idea of a commission, said there’s a reason why so many public commenters voiced disdain for law enforcement amid so many recent, public protests in the city. “There’s obviously a trust issue and problem that we have with our public and our officers, and we have to be able to resolve that problem because we can’t coexist, and coexist in a healthy way, if we don’t have a forum for that.”

A candidate for mayor this year, Sarmiento has become increasingly more vocal about the city’s spending on the police department over other areas of the city like parks and libraries.

He himself last year voted for controversial police salary increases along with Penaloza, Solorio and Pulido — raises that drove the $9 million in proposed increases to city spending on police in the proposed budget.

Yet Sarmiento was joined in scrutiny over the police budget by Penaloza and Bacerra. All three officials are, or at one point were, backed by the police union.

On Thursday, Penaloza and Bacerra didn’t explicitly advocate moving money away from the department or making any grandiose reallocations to underfunded areas, but questioned Valentin on certain line items in the budget like overtime pay.

Costs for animal services, homeless response, and other things that had been wrapped into the police department budget were subject to scrutiny by council members who questioned whether those were core, basic police functions that couldn’t be handled by other city departments instead of someone with a gun.

After Valentin explained some of the department’s line item charges, Bacerra said “police are part of our public safety equation, but going forward we do have to be attentive on who performs these services, how they can be provided. This is the first step as to how we are rethinking how we are going to do this.”

Responding to calls to reallocate money to areas like parks, Bacerra said “well, most people aren’t going to go to a park if they don’t feel safe … we’re not gonna be able to attract investment in our city if we’re not safe.”

It was Sarmiento and Penaloza who voted against the budget because of the police spending increases. Penaloza also took issue with increases to the city’s firefighter services contract with the Orange County Fire Authority.

“To the extent the way the budget is presented, in my opinion, doesn’t reflect the priorities and values that I’ve heard from residents and constituents,” Sarmiento said.

But throughout the meeting he made a point to defend officers in the department, remarks that later in the evening some public comment callers — frustrated with poor police relations in the city — circled back to. 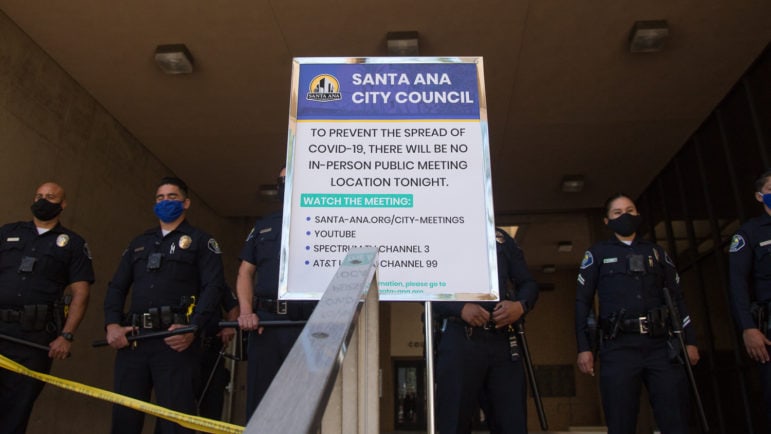 At the press conference before the meeting, many speakers denounced a heavy police presence that met them as they were setting the podium and microphone up.

And all the council members refrained from joining hundreds of their constituents’ calls to “defund” the police.

The budget will come back to the council for a second reading. Though City Attorney Sonia Carvalho said any changes to the budget requested by council members would have to be minor or elaborate on requests made during Thursday’s budget discussion — meaning no last minute requests for deep cuts or reallocations from one department to another — lest the process begin all over again.