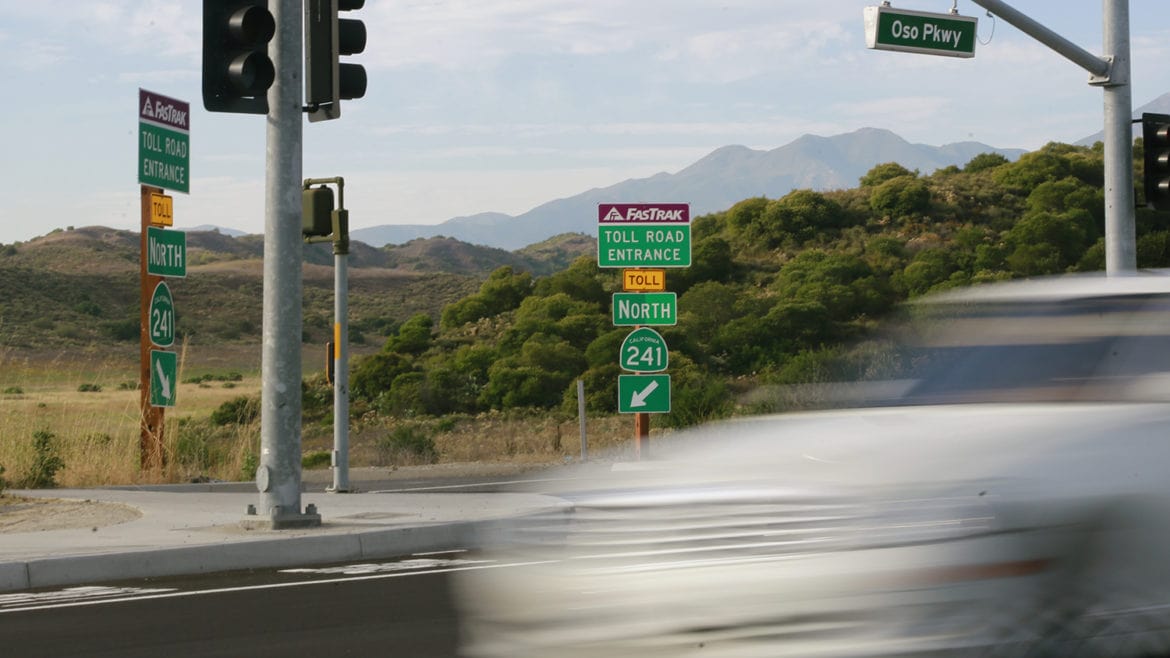 Back in March, South Orange County toll road officials seemed to back off a handful of controversial proposals to extend a south county toll road in favor of extending an existing, non-tolled road in the area for traffic relief.

But now those officials at the Transportation Corridor Agencies (TCA) are objecting to state legislation that would affirm their own move, issuing a statement against the proposed bill on June 3 and using paid lobbyists to oppose it in Sacramento.

Observers are criticizing officials for spending public money on lobbyists that could instead be going toward paying down TCA’s current $4.8 billion debt accrued when the agency issued bonds to build more than 50 miles of toll roads in Orange County.

“You don’t make a unanimous vote on something and then oppose efforts to codify it in the State Legislature. They know their decision to drop the toll road extension could later be revisited by a future board,” said Michelle Schumaker, a longtime south OC resident and one of the agency’s most vocal critics. “Lo and behold, they started paying lobbyists to oppose this legislation and here they are, wasting our money.”

Meanwhile, the Orange County Grand Jury on Monday issued a report that questioned the necessity of an agency that “completely fulfilled its original mandate to plan, finance, and build (toll roads) yet it continues to involve itself in future planning efforts, some of which are probably outside the purview with its charter.”

Grand jurors in their report also raised concerns that “much of the planning is being performed by consultants and TCA staff, who have a financial interest in seeing the TCA continue beyond its original mandate, and out of view of many of the TCA board members and the public thus creating a conflict of interest issue,” while elected officials “who have voiced opposition to the TCA have been subjected to negative information campaigns by TCA proponents.”

Board directors from both of TCA’s branches on March 12 voted unanimously to drop a slew of proposals to relieve south county traffic by extending the 241 toll road through cities like San Clemente.

Instead, TCA directors voted to pursue an extension of Las Patrones Parkway — a county road that starts at Oso Parkway near the 241’s final exit and isn’t tolled — down to Avenida La Pata, which stretches past San Juan Hills High School in San Juan Capistrano and connects to San Clemente.

Directors like Lisa Bartlett, who’s also an Orange County Supervisor, at the time said the move would put communities “at ease,” after lead-up to the decision on the various proposals had seen intense opposition by members of the public — namely, the proposal to build the toll road through San Clemente. 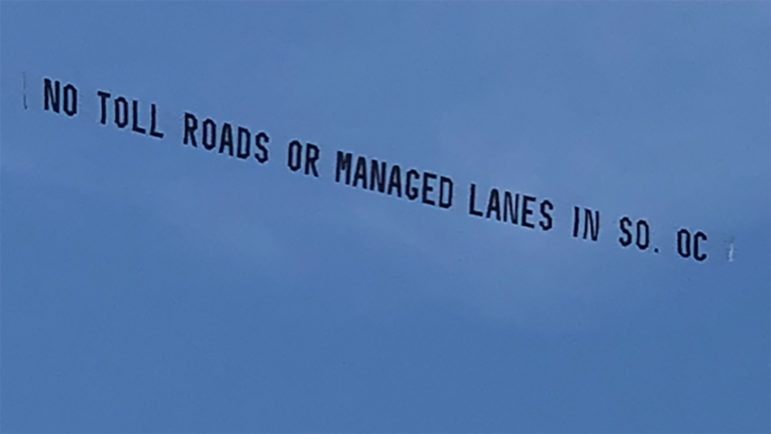 A flyover sign advocating against toll roads in south OC from 2018.

But it’s roiled TCA directors like Tony Beall, a Rancho Santa Margarita City Councilman, who during a June 3 meeting said Bates’ bill “further attacks the TCA, and weakens the TCA, and to me that’s very sad.”

“She claims it merely intends to codify (the directors’ action) — that’s false; she claimed that it’s intended to stop any controversy — that’s false,” Beall said at the meeting, saying the proposed Senate bill “creates controversy where there is none today.”

Bates in a phone interview said all the bill does is memorialize what the TCA directors voted on in March, adding she had agreed to include two amendments to the bill that agency officials had requested:

Even grand jurors in their June report said Bates’ bill “makes sense in light of the SCTRE Alternative 22 selection as the preferred route to connect SR-241 to I-5.”

Brough, speaking over the phone during budget hearings in Sacramento, said he’s also proposed an aligning bill, SB 3331, clarifying that the 241 ends at Oso Parkway that’s currently in the transportation committee.

“There’s been a lack of public trust in the agency for several years, and the reason I got into this is because they hadn’t built a road in 20 years, but keep collecting development impact fees,” he said. “But their hair’s on fire over a bill that just correctly defines the 241.”

In a letter to Senate Appropriations Committee Chair Anthony J. Portantino, TCA board chairs Christina Shea and Patricia Kelley wrote “there is no need for the State Legislature to fix something that is already working well at the local level.”

Beall, during the June 3 meeting, said TCA with its vote in March “tried to extend an olive branch to the community,” adding that the proposed bill’s “ripping open old wounds and creating division where there doesn’t need to be.” He added the bill implies “somehow the directors are trying to renege on the action they took in March.”

“Nothing could be further from the truth,” he added, before directors voted on a resolution statement opposing the bill.

Since then, the TCA directors during public meetings have heard updates from lobbying firms they pay for like Nossoman LLP on efforts to oppose the proposed bill up in Sacramento.

Nate Solov, a lobbyist for Nossoman, updated TCA officials during a June 25 meeting on where the bill was in the legislature, and said it still has a few committees to clear before the end of the Summer.

Reached for comment, TCA spokesperson Lori Olin didn’t immediately have information on how much the agency has spent on lobbying activities directly related to opposing Bates’ bill.

But since January 1 of last year, the Eastern/Foothill branch of TCA has spent nearly $360,000 on Nossoman for other lobbying services, according to state documents.

Brough added the lobbyists up in Sacramento have “been saying some pretty disparaging things about Bates.”

Meanwhile, the agency’s finances have raised the eyebrows of a national public accounting watchdog group, which in a report detailed TCA’s $4.8 billion bond debt while carrying $828 in available cash, remarking that the agency transferred ownership of the roads to the California Dept. of Transportation (Caltrans).

“The agencies, therefore, gave away the asset but kept the associated debt,” wrote the group, Truth in Accounting, in a June report.

While she said the $858 million in cash the agency has at the moment appears small compared to the total bond debt, “we’re of course continuing to collect the tolls to pay the bonds.”

Despite the current COVID-19 pandemic’s impacts to vehicle trips on the toll roads — and subsequent hits to toll fee revenue — Potter said “we’re very well positioned because of actions we took over the past year. We have very strong liquidity, and despite what we’ve seen with COVID-19, we’ll still be able to make our bond payments as scheduled.”

Back in April, she said the agency already met its financial obligations for the 2020 fiscal year, paying off a total $115 million of its debt between the San Joaquin and Eastern/Foothill corridors. In fiscal year 2021, that payment will be roughly the same.