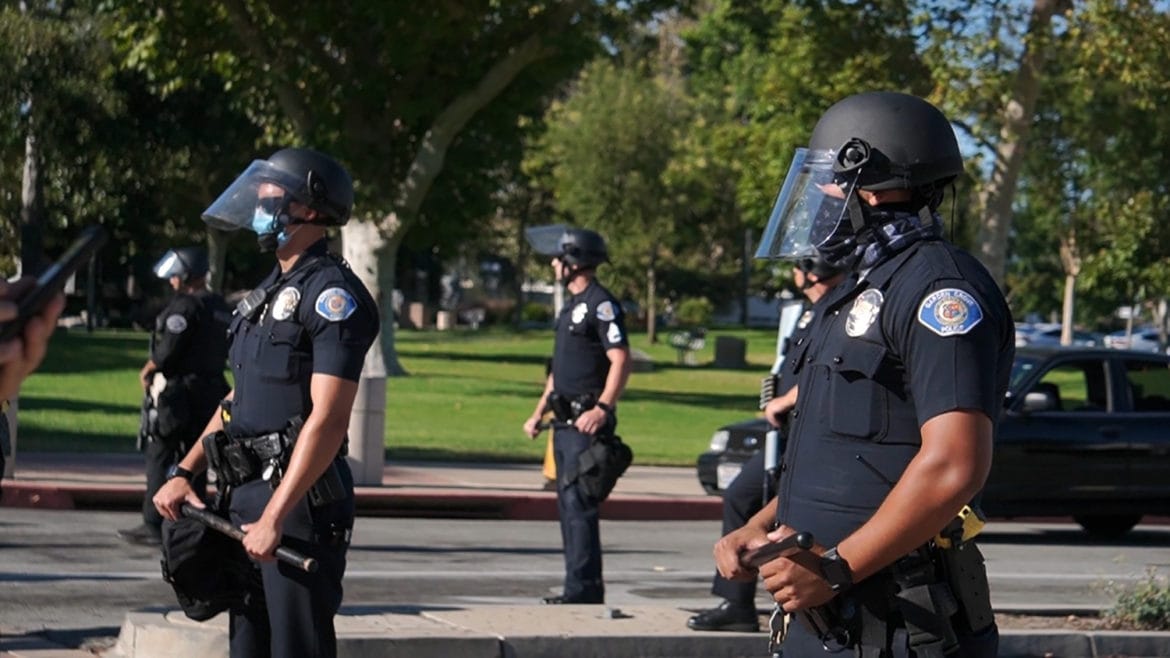 Garden Grove police officers, and more recently Anaheim police, have been criticized for their response to local protests.

An increasing number of protesters in Orange County are voicing concern over police officers’ recent conduct in cities where demonstrations against nationwide police violence have occurred.

Most recently, a protest in Anaheim against more federal agents dispatched to demonstrations in Portland, Oregon, was interrupted July 25 when a police car struck someone during the march and was filmed driving away.

Ray Valdivia, an Anaheim resident and member of the Instagram social justice group @urfightmyfight, said he witnessed what happened and that the officer left when protesters approached the car and the demonstrator who was hit.

Videos of the incident later popped up on social media, one captured by the very person who was struck and another showing what activists claim is the same police cruiser speeding off through a parking lot between two buildings as cameras followed.

Anaheim city spokesman Mike Lyster said Monday the city is “aware of the incident and have spent most of Sunday looking into it and continue to do so today,” and that the officer “was working traffic control, protecting those who were demonstrating.”

“While we continue to gather facts and details, any suggestion the officer acted intentionally is incorrect,” Lyster said, adding “suggestions he irresponsibly left the scene are incorrect.”

Lyster said the city’s full response to the incident would be put out on social media and provided to the City Council at its Tuesday meeting.

At that same meeting, officials are also set to hear two reports touching on subjects like officer conduct and recommendations for police practices from two different oversight bodies in the city: the external office of independent review, which has full access to the department’s investigative case files and records, and the city’s police review board, which advises the city manager.

Valdivia said “accidents happen” but that when the officer drove away was “when we all had a problem.”

“The fact that we don’t expect there to be accountability unless we rant and yell, is the reason we were out there in the first place,” Valdivia said. “We’re still not sure if there will even be any accountability this time, despite how obvious of a problem this hit and run is.”

Complaints around officers’ conduct at protests also arose after a July 18 march in Garden Grove.

Organizers in that city — some of whom just turned 18 years old — decried actions by the police after an officer waved a baton at protesters out of an unmarked car, and organizers also claimed officers did nothing when a white car sped toward a crowd of marchers and jumped a nearby median.

All of the events were also captured on video and posted to Instagram — where in the same post another video showed an officer recording protesters with a handheld camera despite Garden Grove officers’ uniforms containing body-worn cameras, something protesters criticized as an intimidation tactic.

Police officials in Garden Grove said the baton-waving incident was under investigation while officer resources were unavailable to address the speeding car. Officials also said the use of a handheld camera was officers’ way of “getting both sides of the story.”

Garden Grove police Lt. Richard Burillo, in response to questions for a previous story about the protest, confirmed that some officers had responded to the protest in unmarked vehicles due to a lack of marked police cars available that day, and said the baton-waving incident would be “handled internally.”

“That shouldn’t have happened,” Burillo said previously. He didn’t respond to requests for comment Monday seeking an update on the internal probe.

Looking back on what happened in Anaheim, Valdivia contends “there’s a sense of entitlement and of ‘brotherhood’ (among police officers) that doesn’t seem to be going away.”

Meanwhile, local elected officials are using new venues — like coronavirus news conferences — to combat any calls to “defund the police,” a message that some protesters mean literally while others say the phrase is a call to reallocate money to other programs such as parks, libraries and other segments of city services that affect youth and public safety environments.

Orange County Supervisor Michelle Steel, who has responded to protests at board of supervisors’ meetings with praise for law enforcement, last week again rejected calls to “Defund the Police” during a coronavirus news conference hosted by county staff.

During her July 23 remarks at the news conference, Steel started her point by criticizing the state over the potential release of inmates — part of an effort to address coronavirus health concerns in California prisons — onto Orange County streets.

For the second coronavirus news conference in a row, she pointed to the recent release of convicted sex offender Cary Jay Smith, who had been reportedly moving around the county, adding she fears that some of the people released would reoffend and put “unnecessary strain on resources and personnel on the Orange County Sheriff’s Department and local police departments.”

“On top of all that, we’re facing radical calls to defund and dismantle these police departments in the midst of this once in a lifetime pandemic,” she said. “We should seek ways to alleviate strain on our law enforcement — not complicate it.”

“Now more than ever,” she added, “they need our support.”

She’s using the same arguments in press materials attached to her congressional campaign.