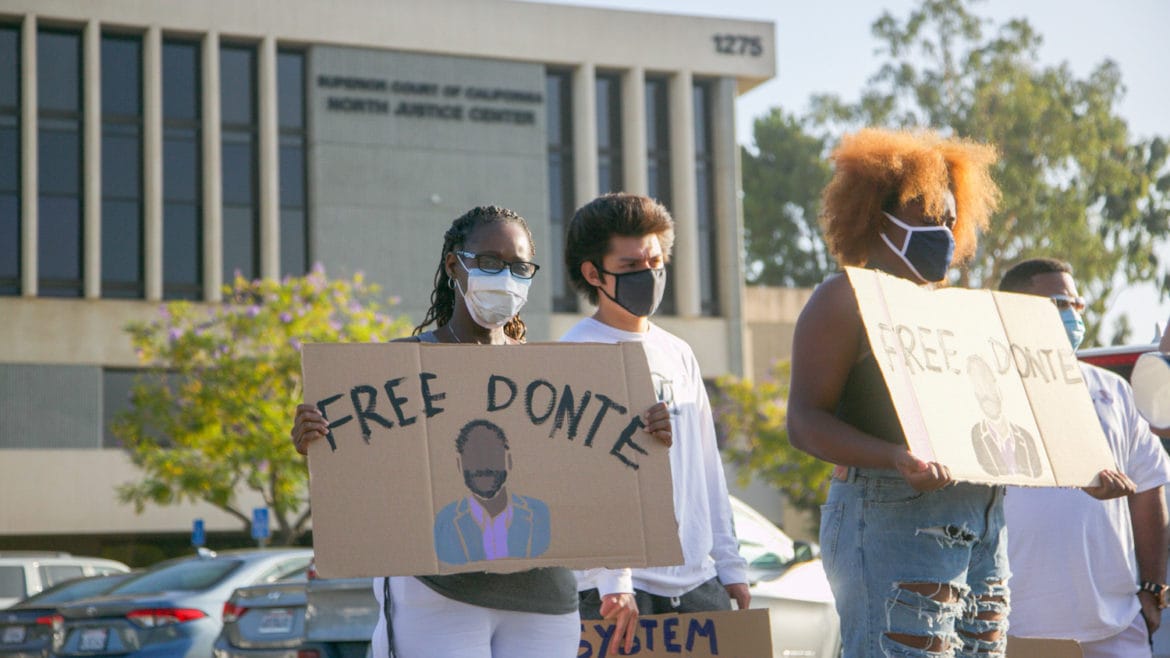 Family members and activists rallied around Donté Epps, a 29-year-old Black man facing criminal charges in Orange County, outside the North Justice Center courthouse on July 10 where his pretrial hearing was scheduled.

The family of Donté Epps, a 29-year-old Black man arrested for attacking his female roommate last year, argue Orange County prosecutors have over charged him, noting his situation epitomizes the emerging debate over criminalizing people of color with mental health crises.

Epps’ family and local activists have mounted a campaign to raise awareness of the case, and held a protest this morning outside the Fullerton courthouse where his pretrial hearing was scheduled for 8:30 a.m.

Buena Park police arrested Epps in October last year after they said Epps attacked his female roommate and her family member in their Buena Park apartment with what Sgt. Mario Escamilla described as an “edged weapon,” while the criminal complaint filed against Epps in court adds that he threatened police on scene.

Family members say the weapon was actually a potato peeler, while Orange County District Attorney Todd Spitzer said it was a knife.

Epps, a car salesman who’s originally from Virginia, has since pled not guilty to seven charges in Orange County Superior Court, which include attempted murder and multiple counts of criminal threats and false imprisonment, and he’s been held on $1 million bail at the Theo Lacy jail in Orange for eight months.

Yet family members like his mother, Terronda Epps, said her son has never been violent in his life but that he was displaying uncharacteristic paranoia and anxiety in the weeks leading up to the incident. Looking back, she said she should’ve recognized the signs something was wrong.

“If you want to blame somebody, I guess as his family we would have been to blame. We saw something was going on, really couldn’t pinpoint it,” she said from her home in Virginia during a Monday video call, before she flew out to California for the Friday protest.

Responding to Voice of OC questions about the case, Spitzer said he personally reviewed the police reports and 9-1-1 call tapes around Donté Epps’ case and is standing behind his prosecutors’ charges.

“I felt this case was important enough to review myself, and I reviewed the police reports and reviewed the 9-1-1 tapes, and I’m telling you, this case was not overcharged,” he said in a Tuesday phone interview. “There are multiple witnesses, no dispute about the facts and he acted very violently. These are very serious charges and the defendant engaged in very, very dangerous conduct.”

Asked about the details of the case, Donté Epps attorney, Christian Kim, refused to comment citing the upcoming Friday hearing.

Spitzer said any motion for Donté Epps to be diverted from jail and into mental health treatment would have to be filed by Kim.

Terronda Epps said she asked Kim about filing the motion, but he hasn’t done so in the case. 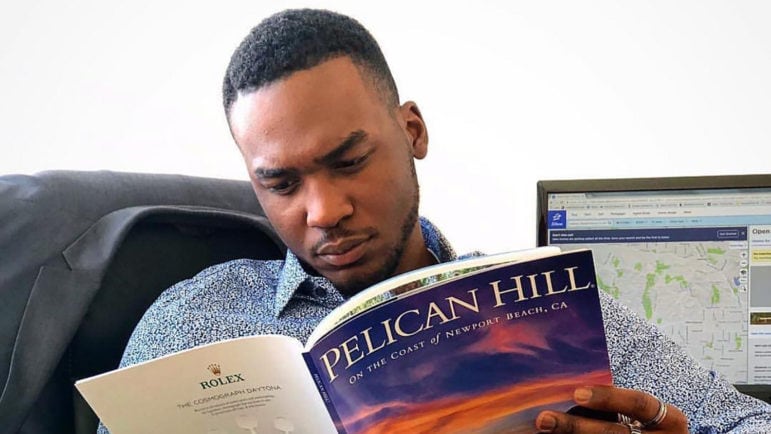 Courtesy of the Epps family

“If his attorney brings forward information with documented mental health issues, of course we’ll discuss that and we want to do everything we can to protect the public,” he said.

Besides the ongoing case, Donté Epps has no criminal record in Orange County, according to a search of the county courts’ database.

Terronda Epps said she isn’t advocating for dropping all the charges or a dismissed case.

Instead — given what she says is her son’s mental health crisis — she wants the eight months he’s spent in jail deducted from any sentence he gets and says her son’s experience speaks to the systemic problems facing people of color in America’s criminal justice system, as well as the importance of diverting people with mental health issues away from jail and into treatment.

At one point, she remarked, prosecutors had leveled a premeditated attempted murder charge against her son.

Spitzer said prosecutors assigned to the case took that charge off the table months ago.

“Given everything that’s happened, we’re asking for time served,” Terronda Epps said, describing her son throughout his life as “very professional, very suit and tie. How he eats is professional.”

That was his character, she added. “He’s a salesman. He is a people person. We have a joke going around in my household that, when he comes home, nobody’s going to sleep. He’s gonna talk all night long. He loves people.”

Donté Epps 12th grade teacher, Monann Davis, in a Monday video call said he was a “leader” during classes at their high school in Prince George, Virginia.

“When I say a leader — we had several students that weren’t always doing their best and the things that they were supposed to do, and Donté would always straighten them, tell them ‘You need to get on the right track. You need to change what you’re doing,’” Davis said. “It was not something he was required to do, was not something he needed to do. He just volunteered to do it and help out. He was always helping.”

His mother said her hope is that county prosecutors take a different approach around cases involving people of color experiencing mental health issues, long after her son’s case is over.

Donté Epps’ brother, Mikale Harris in a Monday video call said his brother had been displaying unusual behavior through text messages and on social media, like paranoia.

Sarah Khan of Transforming Justice OC has been working with Epps’ family to advocate for the reduced sentencing that they’re seeking, and in a Monday interview said “it was clear that he was having a mental health crisis (during the incident) and that everyone on scene was aware of that.”

“It was obvious that he was in distress and that he needed care and that he was — in my view, from an outsider’s perspective — a perfect candidate for mental health diversion rather than for incarceration,” Khan added.

Spitzer himself has in the past advocated the diversion of people living with mental health conditions away from jail and into treatment.

In a 126-page report submitted to the county in 2017, Spitzer — a county supervisor at the time — and former county Sheriff Sandra Hutchens outlined recommendations for expanding mental health services, court efforts to divert people into treatment, and creating a county office to coordinate re-entry programs for “re-offenders, the mentally ill and the homeless.”

In a later 2019 op-ed in the Orange County Register, Spitzer also opposed a state Assembly Bill that grants pretrial diversion, for a period no longer than 2 years, to a misdemeanor or felony defendant suffering from a mental disorder, in order to allow the defendant to undergo mental health treatment. In the op-ed he called the bill, which was signed by the Governor in 2018, a “get-out-of-jail-free card.” 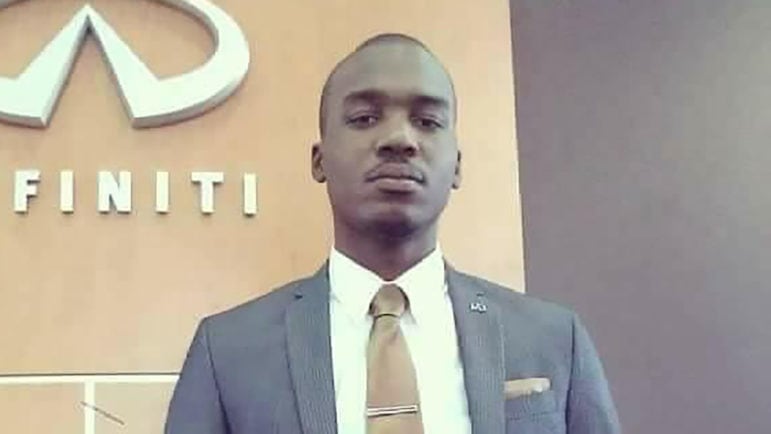 Courtesy of the Epps family

Epps was a car salesman.

Terronda Epps said long after her son’s case is over, she’ll continue speaking out about Black mental health and its treatment in the criminal justice system.

“This will never be over for us. Honestly, it’s just the beginning,” she said. “From here on out, I’m gonna be dedicated to helping other families with a similar situation.”

She questioned what would have happened to her son if he hadn’t had the support network of his family, teachers and activists advocating for him.

“Honestly, although the last 10 months for me and my family have been hell, we’re still blessed because he still has a pulse. He still could pick up the phone and call me; he can still write letters,” she said.  “But what happens to the young man or the young woman that does not have this type of support system?”

She said she’s now “in it for the long haul — It doesn’t end with Donté, it’s just the beginning.”

“I need to make sure that I’m able to help another mother and father and support them the way the community has supported me,” she said.

With her flight to California scheduled, she’ll arrive in Santa Ana on time for Friday’s protest.

She said it won’t be her last.