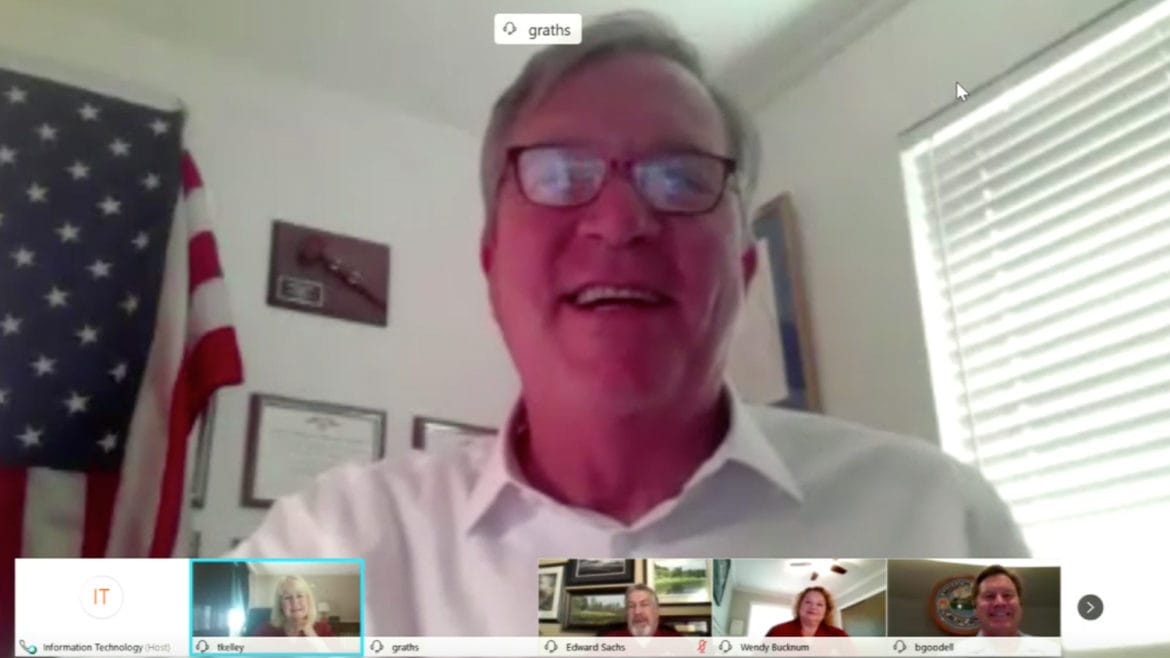 Greg Raths, a Mission Viejo City Councilman and Republican candidate for the 45th congressional district seat is facing criticism for his use of social media in the last couple of months that came to a head earlier this week in an argument over Twitter.

Raths and Briana Walker, an outspoken critic of Raths’ on Twitter, got into a disagreement that stretched over several hours that largely revolved around Raths’ work as a councilman, with Walker bringing up the possibility of seeking a restraining order and Raths calling her statements lies.

Walker shared that Raths had come to her house after she spoke at public comment during a City Council meeting about concerns with crime in her neighborhood last December, saying she felt threatened by his showing up at her doorstep unannounced.

Security footage captured Raths there, saying “You came last night, and this is a big deal, 50,000 people know about it now so I’ve got to find answers to solve the problem.”

The argument is another example of controversies surrounding elected officials at all levels of government controlling or limiting opportunities for public comment on their social media where they discuss public policy. As recently as this spring, Irvine Mayor Christina Shea came under scrutiny for her handling of commenters.

Though more court rulings on the issue are expected, a ruling in a case against President Donald Trump in 2019 found that the president could not block or restrict commenters who disagreed with him, even though the account was his personal account because he used it to discuss public policy.

“(Walker’s) very nice, I don’t know why she’s attacking me now I guess she’s just a big progressive Democrat who doesn’t like Republicans,” Raths said on a phone call Tuesday with Voice of OC. “I offered a sit down, and she’s all, ‘oh, you’re threatening to come to my house.’ I’m just going to leave her alone. I’ve got many other things to worry about.”

In a text to Voice of OC, Walker said this isn’t the first time she’s had issues with Raths’ account, but said she’s been blocked from his account at least five times in the last several months, and contacted him about the blocking multiple times.

“As a constituent, I’m going to remind you again that the courts continue to uphold our legal right of freedom of speech which allows me to criticize the government as I feel necessary,” Walker wrote in an email to Raths in May. “I apologize if my criticisms hurt your feelings, but I stand by my constitutional right to be heard.”

Raths’ only response in that chain of emails was to direct her to email him at a private account.

“Katie Porter has asked for all my emails so I cannot respond on this platform,” Raths wrote in the email. Porter is Raths’ opponent in the congressional race, as the incumbent first-term Democrat.

Four other residents of the 45th district interviewed by Voice of OC shared stories how after they’d commented on Raths’ social media posts they were blocked for several days, and then allowed back on the account.

Three of the residents asked to remain anonymous, citing fear of a reprisal from Raths on Twitter, but provided proof they had been blocked by his account at least once in the past four months.

They all claimed the posts did not contain any profanity, only pointing out that they disagreed with his views or fact-checking information he posted, but could not produce the comments after they were erased by Raths.

Larry Butterfas, another blocked constituent, said Raths blamed the mistake on a new campaign manager and promised to fix the issue the first time it happened.

But when asked by Voice of OC who manages his Twitter page, Raths changed his answer several times.

In a phone call with Voice of OC in June, Raths unambiguously said he was the one who managed the page, but in another call the next week, he altered his answer.

Raths said his campaign manager took over managing his social media pages in mid-June, but residents have reported blocking problems since as early as April, and emails showed that Raths responded to those concerns from his city email account.

But then minutes later, Raths said that he still regularly posts on the page.

“I post, he’s been posting, we kind of talk about what we’re going to post for the day, sometimes my campaign manager does it,” Raths said.

Butterfas’ emails with Raths show that Raths offered to sit down for coffee with him, but re-blocked the account before they could meet.

“It seems to be a little game,” Butterfas said. “I’m a liberal Democrat in South Orange County. I disagree with practically everything Greg Raths does and I have a right to do that.”

Raths defended the blocking, specifically citing one of Butterfas’ posts that showed a photo of several former first ladies, including Hillary Clinton and Michelle Obama, and showed a photo of a naked Melania Trump from her modeling career with black censor bars in place.

The debate over Raths’ blocking comes on the heels of a similar argument in Irvine, where Mayor Christina Shea came under fire for deleting comments posted to her personal Facebook page about protestors and the Black Lives Matter movement.

Shea defended her actions, citing her Facebook page as being personal, but multiple legal groups have threatened to sue, arguing the Trump case ruling does not allow Shea to block constituents on the page.

When asked to weigh in on Shea’s case, Karl Olson, a prominent First Amendment and media lawyer from San Francisco, said the social media blocking could be seen as a “grey area,” but if the comments were just offering dissenting opinions they should be left alone.

“I think there are definitely First Amendment concerns when a public official sort of stands on the soap box and uses an account for political purposes and then tries to stop other people from using it,” Olson said.

Olson said that comments that threatened violence could be deleted or blocked, but name-calling of politicians was just “something that came with the territory.”

“Part of it’s an issue with what you can do with Facebook and part of it is a legal area and that’s why it is such a grey area,” Olson said. “I don’t know what a court would do.”