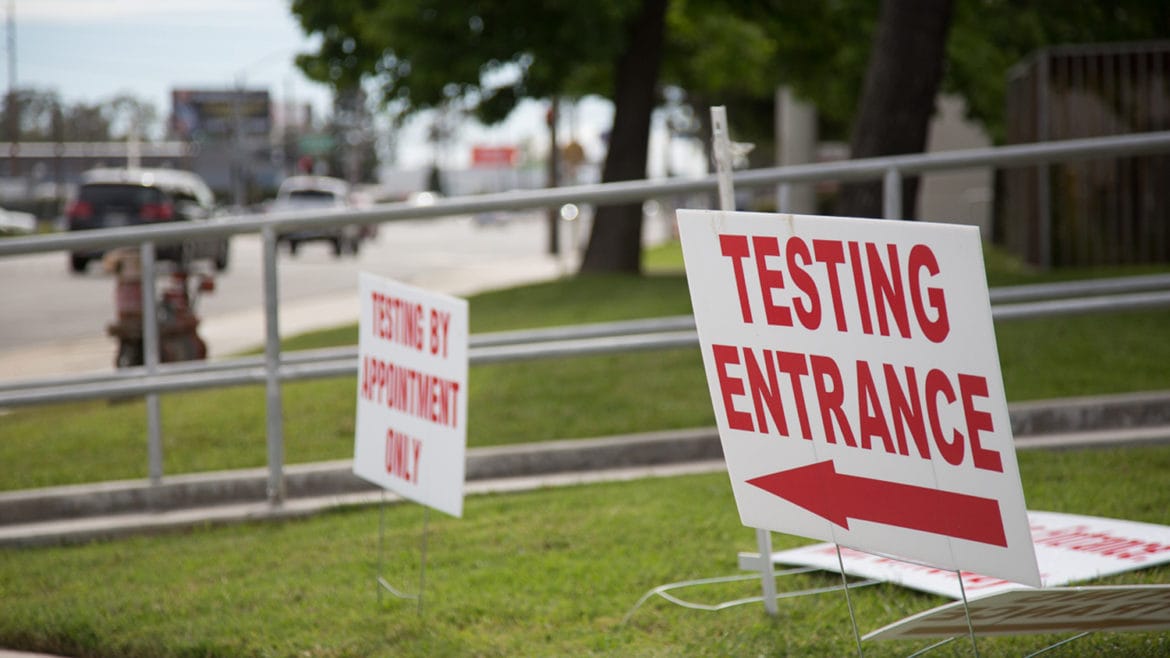 Signs outside a coronavirus testing site in Garden Grove on May 18, 2020.

Months into the coronavirus pandemic, Orange County is among many regions facing shortages of two key components to slowing the virus’ spread – testing and contact tracing – with some residents having to wait more than a week to get tested and results often taking several more days to come in.

When it comes to contact tracing, the County of Orange is way behind, with fewer than half the contact tracers recommended by state health officials.

When the county applied to the state in May to re-open more types of businesses, county officials attested to having enough contact tracers. The application said there should be at least 15 contact tracers per 100,000 residents, which for a county of OC’s size is 480 contact tracing staff.

As of Friday, Orange County had fewer than 185 contact tracers, officials said, with not enough resources to contact everyone who tests positive.

Orange County Health Care Agency officials acknowledged the challenge and said they’re doing their best with the resources they have.

“The number of staff doing [contact tracing] work and the number of cases investigated varies day to day. The OC Health Care Agency (HCA) has approximately 185 staff working nearly full time on COVID-19 activities and those resources are used to meet the most pressing needs for public health response first (i.e. Skilled Nursing Facility outbreaks) and staff shift from one activity to another to make the best use of available resources at all times,” said the county’s  acting director of public health services, Marc Meulman, in a written response to questions.

“Given the high volume of cases and public health activities more critical than [contact tracing], there are not adequate resources to make contact with all cases. We monitor cases regularly to adjust priorities as disease transmission shifts.”

Over the past decade, Orange County supervisors have cut nearly $20 million in unrestricted tax dollars from the county Health Care Agency’s budget while more than doubling such spending on the Sheriff’s Department, mostly for pay raises for deputies whose union is the supervisors’ largest campaign spender.

“We are aware that it is taking more than a week to get an appointment at some test sites and that many of the major labs are backed up over a week as well,” Muelman said.

“Demand outstrips the capacity of the entire system both in-terms of appointments and lab processing time due to increases in disease, requirements for testing from employers, increased unnecessary exposures due to loosening of social restrictions and personal behavior.”

In one sign of the growing community spread of coronavirus, more people are now getting tested but the share of OC residents testing positive has doubled from 7 percent to 14 percent in the last month.

“The Centers for Disease Control and Prevention now estimates that for every confirmed case, there are 10 that are not confirmed. [Contact tracing] can help slow the spread; however, when only fewer than 10% of cases are diagnosed and for the remaining there is no ability to follow-up, even [contact tracing] at its best cannot slow transmission enough,” Meulman said.

“In addition to the small fraction of cases that are confirmed, other factors such as testing delays and reporting delays limits how effective [contact tracing] interventions can be,” he added.

“Because of this reality, it is critical that all members of the community practice behaviors that prevent transmission including staying home as much as possible, especially when sick, isolating when infected, quarantining if exposed, social distancing, wearing face coverings, washing hands frequently, and disinfecting frequently touched surfaces.”

Andrew Noymer, an epidemiologist at UC Irvine, credited the county for being transparent about the challenge with testing and contact tracing, which many communities outside Orange County are facing as well.

“That’s a candid acknowledgement of how hard contact tracing is when we’re in that sort of context, of 1,000 [new] cases a day. Contact tracing is difficult…in an expanding epidemic. And it’s good to see their candor, because I think honesty is the best policy,” Noymer said.

“I do support them trying to get the resources so that they can try to turn that around” through expanding access to testing and contact tracing, he said.

“The whole idea of this thing is to basically try to slow things down until we get to a vaccine, or until we get to herd immunity,” said Dr. Thomas Cesario, an infectious disease doctor and former dean of the UC Irvine School of Medicine.

“And so what we’re trying to do is contain the rapidity with which it spreads. And the way to do that is…to try to make sure that we get people who have the disease away from others whom they’re likely to spread it to. so by identifying people [through testing who have coronavirus], contact tracing them, and putting them in isolation, the intention is to keep infected people out of circulation and hence prevent them from [infecting] others, which of course slows the rate” of the spread.

Testing and contact tracing are each “one more weapon in the battle…that we use to slow this [disease spread] down,” Cesario added, saying they’re among the “foundations” of public health.

Test results for hospital patients generally have a turnaround time within 24 hours, with an initial test result back in a couple of hours, he said. But for people who aren’t hospitalized, it can be a several-day wait before the next appointment and it’s not uncommon for it to take another four or five days for results come back, Cesario said.

Meanwhile, Orange County continues to not disclose which workplaces have had coronavirus outbreaks, while that info is available in neighboring Los Angeles County.

School officials like Mike Matsuda, superintendent of the Anaheim Union High School District, have been calling for more testing and contact tracing to help prevent outbreaks in local communities.

Asked if there’s a need for more capacity on testing and contact tracing, Matsuda said, “Yes. with capital letters.”

He credited the county for partnering with the nonprofit Latino Health Access to add 500 daily tests at two sites in the hard-hit communities of Anaheim and Santa Ana, which filled up quickly. But more is needed, he said.

Dr. Daniel Chow, an assistant professor at UC Irvine, also noted the increasing delays in test results being reported, making it tougher to determine where outbreaks are happening.

“When you have these kinds of lags, it makes it more difficult to do contact tracing, because right away you wanna call that person,” Chow said. “They may have exposed other people three or four days ago.”