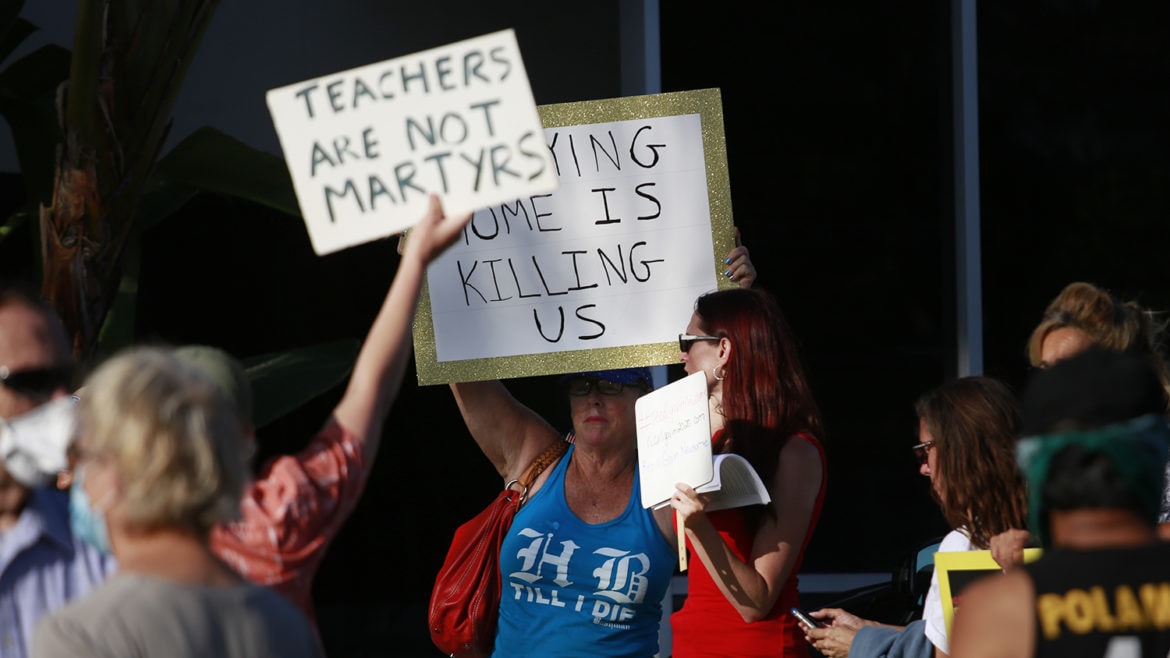 Protestors hold signs outside the Board of Education building in Costa Mesa during the board meeting on July 13, 2020.

Earlier this week, when Orange County’s Board of Education came under intense national scrutiny for guidelines calling on kids to return to school this fall without masks or social distancing, board members largely defended the guidelines by noting they were formulated by a panel of experts.

But in the days since the reopening report’s release, it’s clear that panel members had no say in the final recommendations that were made to the board.

The report was originally hailed in public by the board majority that ultimately approved it as a group analysis from an 11-person panel in June that included multiple education and health experts, as well as county health care agency director Dr. Clayton Chau and County Supervisor Don Wagner.

Lisa Sparks, a member of the board and Dean of Communication at Chapman University, stressed that the recommendations in the report calling masks and social distancing harmful for children came from the panel’s deliberations in a recent NPR interview.

But now, multiple members of that panel have disavowed the report, saying it does not represent their views and that they were never consulted on the document.

Neither were identified as authors within the report, with one small note thanking Swaim for his “assistance and input in the preparation of this document.”

Members of the panel were all listed on the title page, with short bios at the end of the report.

In an interview, Swaim said he was approached about a month before the panel met by Williams and Mari Barke, the board’s vice president, and asked to write the report and serve as a moderator for the panel.

“I’m not a doctor. They said we’re not looking for a doctor, we’re looking for someone to manage the town hall circus,” Swaim said. “They wanted to limit the conversation to are kids at risk, and looking at the data it was pretty clearly no.”

Swaim said he examined the data himself from the Centers for Disease Control and Prevention (CDC) and at the Orange County level, and said the narrative that a return to schools would be harmful was largely propagated by teachers unions. He also brought up concerns that keeping kids home could lead to long term damage as well.

The report’s statement that the use of masks are not based on science was contradicted by the CDC earlier this week, with the agency saying that even the use of cloth face masks can help protect others and the person wearing it, with a recommendation that children under the age of two not wear masks.

Swaim said he was not paid for his work, which he said was largely on his own time but called it consistent with work done by the California Policy Center. He also hosts a podcast called Radio Free California, which is produced by the National Review.

Swaim took issue with those that disputed panel experts participated in the report, saying it was written as an honest summary of the deliberations of panel members he witnessed. He said he included a note about that fact, which he shared with Voice of OC, in the draft of the report he submitted.

But Swaim also acknowledged the report’s final version ultimately didn’t include that kind of language.

“We should note, finally, that none of the conclusions here will reflect the thinking of every one of our experts, let alone the public at large. We’ve done our best here to capture the general assessment of diverse expert opinion. And, of course, some panelists were careful to say that they were speaking only for themselves and not necessarily for all colleagues or organizations with which they work in their professional capacities. You can find their biographies in the Appendix.”

Board of Education Final Version

“In this white paper, we have done our best to capture the general assessment of the various expert opinions. And, of course, some panelists were careful to say that they were speaking only for themselves and not necessarily for all colleagues or organizations with which they work in their professional capacities (see e.g. Appendix A.).”

Swaim stands by the draft he wrote.

“I did my best to summarize the general sense of the panel’s discussion. Fortunately, there’s a record of this, a recording on the board’s website. I would encourage those who are interested to listen to the audio,” Swaim said.

When pressed, Williams ultimately described the role of panel members in writing the report as “inconsequential.”

“The expert panel neither approved of the paper or was involved in writing it. For my knowledge, I have had virtually no contact with our panel since the special community forum in June,” Williams said in an email to Voice of OC.

According to Swaim, around 80% of the report was written before the panel ever met.

It remains unclear how many members of the panel were directly contacted for their advice on the guidelines, but the only members Swaim said he specifically spoke with were Dr. Mark McDonald, a child psychiatrist, and Dr. Mike Fitzgibbons, an infectious disease specialist.

The report’s recommendations are not mandates for local school districts, but come at a time when lower school boards across the county are making their final decisions on the return to classes in the fall.

Some experts whose names were associated with the report disagreed so strongly with its findings that they asked to have their names taken off entirely.

Dr. Steven Abelowitz, a former pediatric chair at Hoag Memorial Hospital Presybterian, said that aside from speaking at the panel he was never contacted in regards to the final guidelines.

“Besides being present as an expert, I had no involvement in what was written or prepared,” Abelowitz said in a phone call with Voice of OC.

Abelowitz asked that his name be removed from the report, and released a statement that he is in strong support of both masks and social distancing, and that he would follow the guidelines from the American Academy of Pediatricians.

Joel Kotkin, director of Chapman University’s Center for Demographics and Policy, also came out against many of the panel’s recommendations.

“I knew they were coming up with a policy, but I had no idea when, and nobody asked me for my opinion,” Kotkin said. “I think many parents, if there were no masks, no social distancing, I wonder how many would send their kids to school if they have any choice at all.”

Multiple members of the county government also distanced themselves from the report. In an interview with CNN on Wednesday, Wagner said his only role was to share the county’s perspective, and that he had never endorsed returning to the classrooms with no additional safety measures in place.

“I never said that, and most of the folks that came from the county…were never saying that,” Wagner told CNN’s Brianna Keilar. “The panel itself never wrote this, I never saw or drafted it.”

Wagner did not respond to requests for comment from Voice of OC.

Dr. Chau was the fourth member of the panel to condemn the board of education’s decision in a statement sent to Voice of OC Wednesday evening.

“I believe that schools should follow guidelines set by the Centers for Disease Control and Prevention and the California Department of Public Health,” read a statement sent by Chau on Wednesday night. “I continue to be a strong proponent for public health prevention measures.”

After the issue drew national attention, Chau and Wagner also issued a joint statement praising the efforts of the department of education, which just days before had put out a statement that flew in the face of the primary recommendations of the panel, which included both of them as members.

“Orange County Supervisor, Don Wagner, and Health Director, Dr. Clayton Chau, applaud the efforts of the Orange County Department of Education to bring children back to school with safety measures in place,” the statement said.

In the same statement, Wagner and Chau – in a seeming about face – issued a statement backing the county department of education plans and had different words for the Board of Education members.

“Both Supervisor Wagner and Dr. Chau encouraged the Orange County Board of Education to remain guided in their plan by the medical professionals,” the statement said. “It is important to reopen safely when the epidemiological data makes sense.”