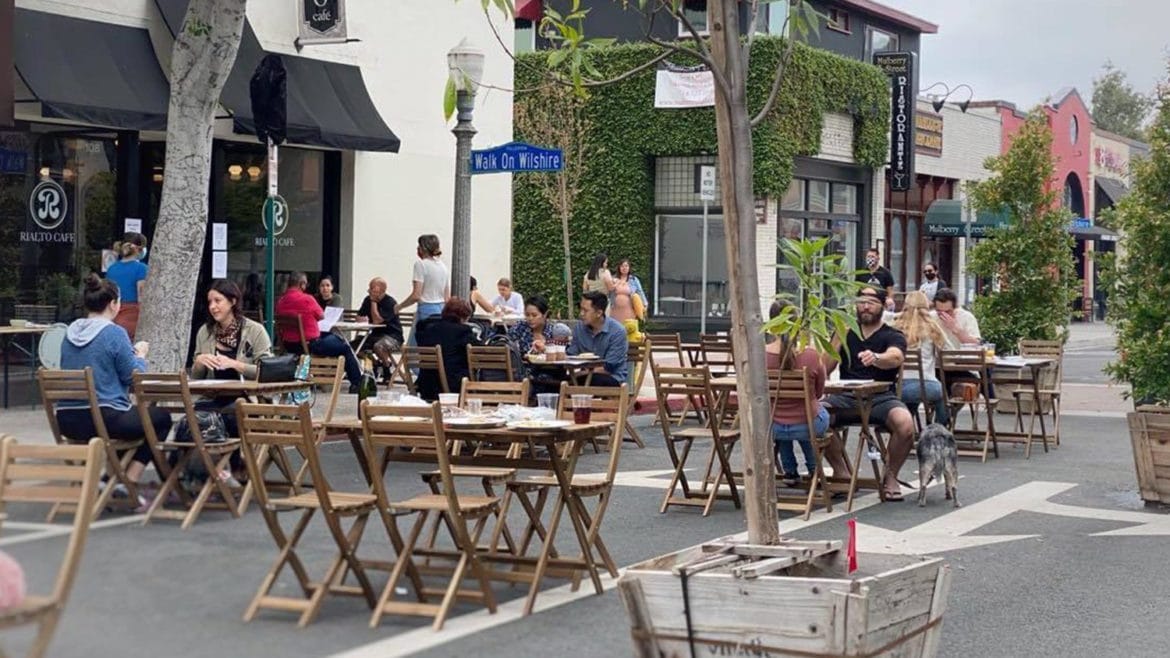 Downtown Fullerton’s "Walk on Wilshire" is closed to vehicle traffic so that restaurants can extend patio seating out into the street.

The dining landscape changed again this month, as bars were shut down for the second time and restaurants are forced to do takeout, delivery, and patio seating only. These guidelines have caused businesses and the cities they’re in to rethink the service model, designing non-traditional gathering spaces to suit their needs. Let’s take a look at three types of outdoor seating: city-assigned, existing patios, and spaces where it previously didn’t exist.

Some communities have closed down streets so that restaurants can stay open and extend patio seating into the streets, parking lots, and other creative nooks.

Downtown Fullerton was eager early on to designate street closures for expanded patio dining. They created “Walk on Wilshire,” a half-block stretch between Harbor Boulevard and Malden Avenue, which is now closed to traffic. Rialto Cafe, Mulberry Street, Green Bliss Cafe and Fullerton Brew Co., the restaurants lining this section of downtown, are now able to move tables and chairs into the street.

The city has also converted parking spots and lots behind Matador Cantina, Vino Nostra, Let It Brie and Stubrik’s Steakhouse so that they have additional dining spaces. In addition, breezeways beside Kentro Greek Kitchen, Les Amis and Revolucion 1910 are closed off to maximize usable space. 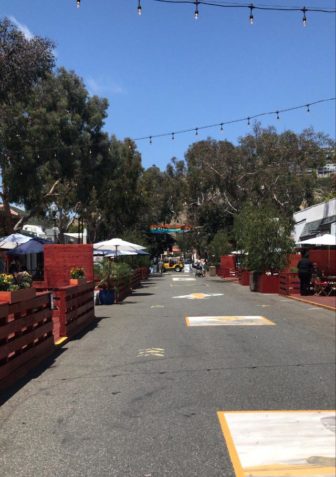 Forest Avenue in Laguna Beach is shut off to traffic.

A bustling section of Forest Avenue (where traffic will redirect one onto Glenneyre if turning from 3rd Street) is transformed into a series of dining pockets being called The Promenade, with fencing to keep pedestrians at bay. Moulin, Alessa by Chef Pirozzi, Brussels Bistro and 230 Forest are among the eateries lining the avenue.

With the PCH side entry completely blocked off, locals can stroll down the middle of Forest to view artwork adorning the street. Police are visibly on patrol to help enforce social distancing. 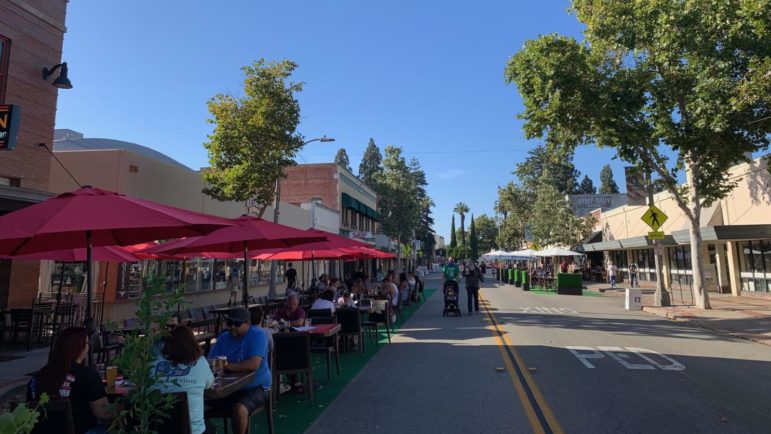 Street closures and extended patio dining was recently approved by the City of Orange along Glassell.

In addition to Glassell closures, parking spots on both East and West Chapman Avenue, South Orange Street, and the southwest parking quadrant in the Plaza (think Felix Continental and Urth Caffé) became designated areas for outdoor dining, complete with astroturf and foliage that doubled as decorative partitions. By July 31, the city will decide whether to extend the closures further.

Many restaurants already have great patios set up for dining. Here are three of my favorites.

While your typical food hall maintains a consistent selection of eateries, the appeal of 4th Street Market is its intentional business model of introducing new concepts to match evolving tastes and trends. With the exceptions of Alta Baja Market, Electric City Butcher and Chunk N Chip, the market is very different from when it originally opened five years ago. 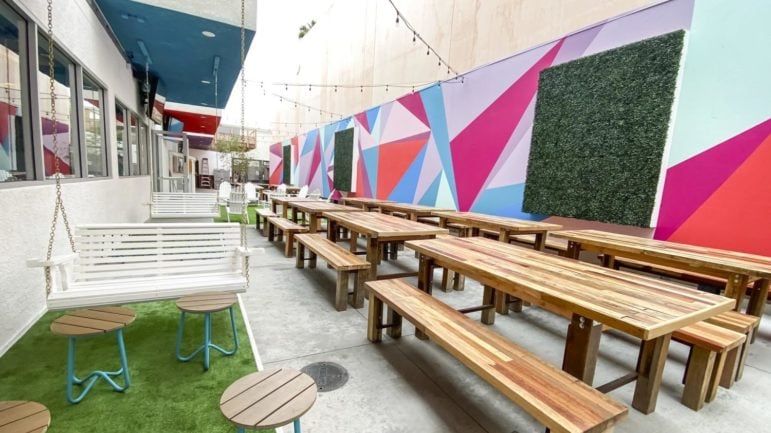 The patio at 4th Street Market.

Established in 2007, Old Vine has been nourishing the community with its revised global menu, thanks to proprietor and executive chef Mark McDonald and co-owner Kate Perry. After moving into the space next door for expanded seating and a designated bar, they continue to grow with the acquisition of two additional dining areas on property. 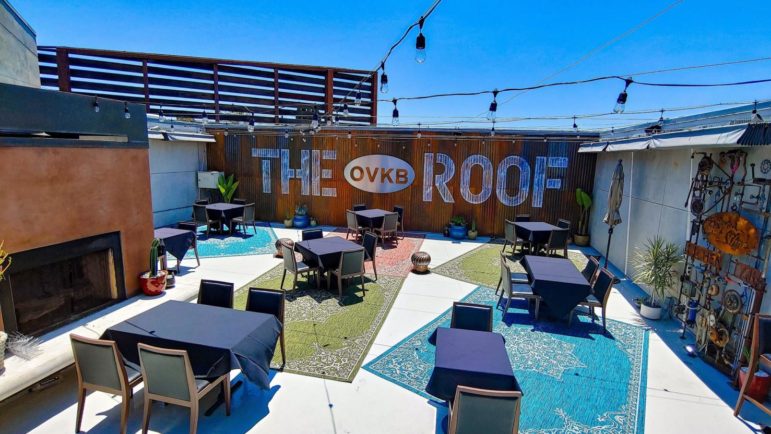 The rooftop patio at Old Vine in Costa Mesa.

A prime example of proper physical distancing, the inclusion of “The Stairway Patio” and “The Roof” means patrons can feel at-ease in their surroundings. Per McDonald, “We are proud to welcome our customers back, knowing that our restaurant has fully implemented all city, county, and state safety protocols, and trained our excellent staff accordingly. Guest and staff well-being is always our first priority.”

If you haven’t had the pleasure of visiting Chef Cathy Pavlos and her tucked away spot, you’re in for a treat at Provenance. 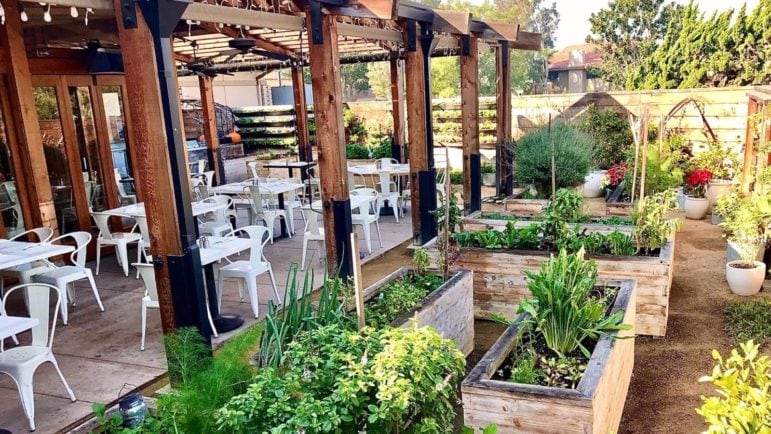 Diners sit right next to the raised bed gardens at Provenance in Newport Beach.

A cozy respite compared to most neighborhood eateries, you’ll marvel at the herb and vegetable garden within arm’s reach of their wrap around patio. Pavlos’ aggressively seasonal cuisine currently features butternut squash ravioli with heirloom spinach, ahi nicoise with cage free eggs and champagne vinaigrette, plus her ode to Nonna’s beef and pork meatballs.

And there are a few restaurants building out new patios, or extending existing ones. Owners are hinting that the new spaces may become permanent additions.

Exit Ortega Highway for not one, but a duo of neighboring options who share a parking lot. 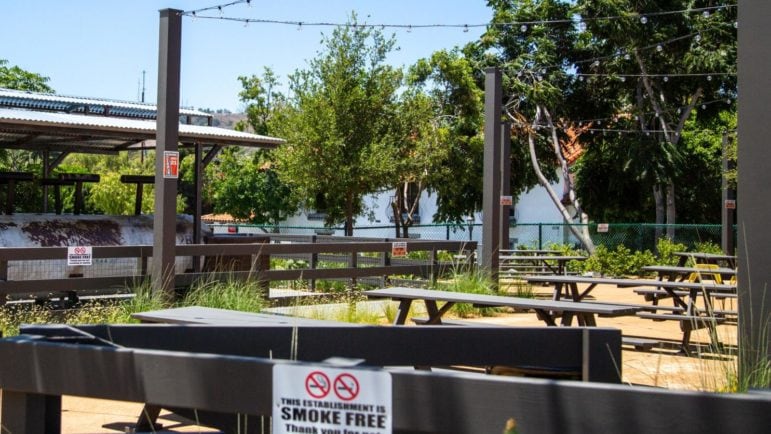 The dining yard at Heritage Barbecue in San Juan Capistrano.

Opening later this month, the notorious Heritage Barbecue is debuting their outside-only space alongside Capistrano Brewing for a perfect pairing in south county. With industrial-sized smokers crafted from the fine folks at Harper, their streamlined kitchen helmed by Danny Castillo is nearly ready to tackle the soon-to-be neverending lines with copious amounts of Texas-style ‘que, a result of increasingly buzzworthy pop-ups at local breweries that had lines down the street. Cheeky reminders of physical distancing are posted throughout.

Trevor’s at the Tracks, former home of Sarducci’s, has extended patio seating at the recently remodeled Verdugo train plaza and provides diners opportunities to partake in their locally-sourced cuisine and California-focused wine list. Partake in succulent seafood, flatbreads, and sandwiches with built-in depot ambiance.

Creating a “backyard” dining space at Craft House was a challenge Chef de Cuisine Matt Sirjani was welcomed since he has prior experience in construction. 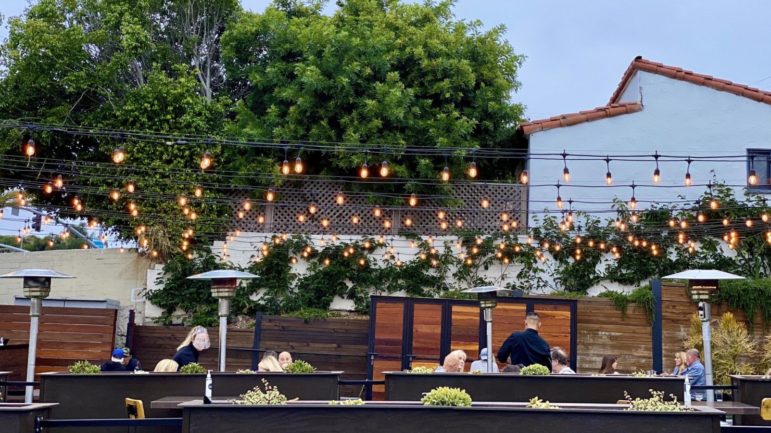 The parking lot at Craft House gave another 2,000 square feet for guests, with tables 6’ 5” apart.

Owner and chef Blake Mellgren elaborates, “It couldn’t have turned out better, realistically, given the circumstances. Being able to add the back patio, more tables and more dining has definitely helped during this time. And with our constant problem of people not being able to get in on the weekends, it’s made life a whole lot easier. As of right now, it will be a permanent addition, rules and regulations permitting.”

In business since late last year, the second location of The Blind Pig built out a covered extension over the weekend. Familiar tunes from portable speakers reintroduce ambiance, as plans to install misters, umbrellas and book live music are in the works. 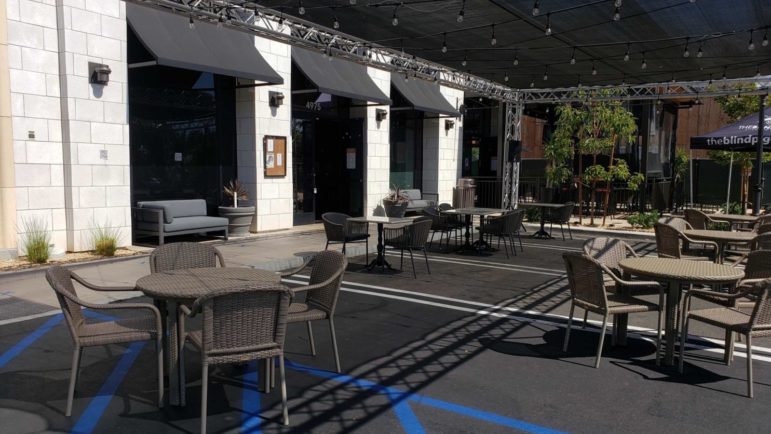 The Blind Pig is currently open Tuesday through Sunday, noon to 8 p.m. Feed those cravings with pan-roasted chicken or tamarind chipotle pork riblets. Plus a cocktail, of course. [Editor’s Note: Their Rancho Santa Margarita locale is currently open for dinner Tuesday through Saturday starting at 4 p.m., with Saturday service that includes lunch at 11 a.m.] Remember to sport a mask when heading into either location.

It’s OC Burger Week!  From July 12-18, 2020 is the time when Orange County celebrates burgers of all varieties. Special menus vary between $10 and $25, depending on the restaurant and whether they include extras such as fries. I sifted through dozens of options to settle on a trio of destinations for your take-out, delivery, and patio consideration. 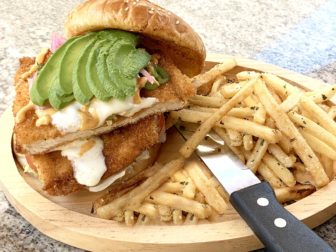 Only available for dine-in patio consumption, the Milanesa Pollo Burger from Little Onion entices with spicy chile arbol sauce, roasted jalapenos and roasted Oaxaca cheese. The generous serving of avocado counters some of that heat, and be sure to request some duck fries instead of standard ones with your $15 plate. Flavored with duck grease and cilantro, what’s a few more calories? It’s also being served at their Santa Ana outpost. 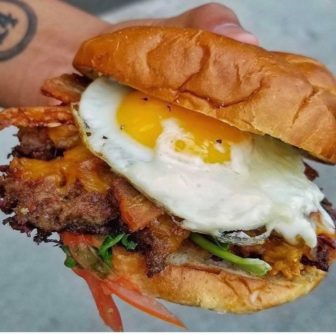 Lahatsilog burger from MFK in Anaheim.

Chef Henry Pineda is crafting his ode to breakfast in this creative rendition of a burger at MFK. Referred to as the Lahatsilog burger, [Editor’s Note: The term silog refers to a Filipino breakfast that includes a fried egg and fried rice], it begins with a crispy corned beef smash burger patty. Lechon (pork) bacon, tocino (also pork) jam, and fried egg reinforce the meaty tendencies of Filipino appetites. Shaved tomatoes, arugula and calamansi prep the toasted brioche bun for its final components, cheddar and garlic aioli. Served with tater tots for $10, it’s an excuse to have breakfast all day. 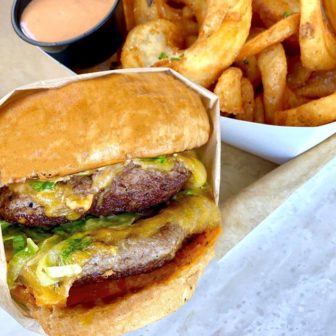 Photo courtesy of The Penalty Box

The Major Penalty burger at The Penalty Box in Garden Grove.

A tenant of SteelCraft food hall, this second concept from retired Anaheim Ducks player Teemu Selanne is a nod to all things burgers, dogs, and poutine (Canadian cheesy fries smothered in gravy, for the uninitiated).

The Major Penalty burger represents classic meat and bun fare, with two Wagyu beef patties, Tillamook cheddar, house sauce and iceberg lettuce. Penalty Box is also giving the option to swap out with a vegetarian patty. Plus, for the $15 price tag they include a side of poutine. Those in the know may already be aware that a lunch service is also available at Laguna’s Selanne Steak Tavern’s patio every Wednesday through Sunday until September 6.

Lastly, I spent Saturday afternoon conducting a live interview with Skyler Tanksley of Munchies Diner over 4th Street Market’s social media platforms. With multiple vegan concepts under his belt, we discussed his local upbringing and decision to pursue a career in the industry. Catch the Instagram TV interview at this link.