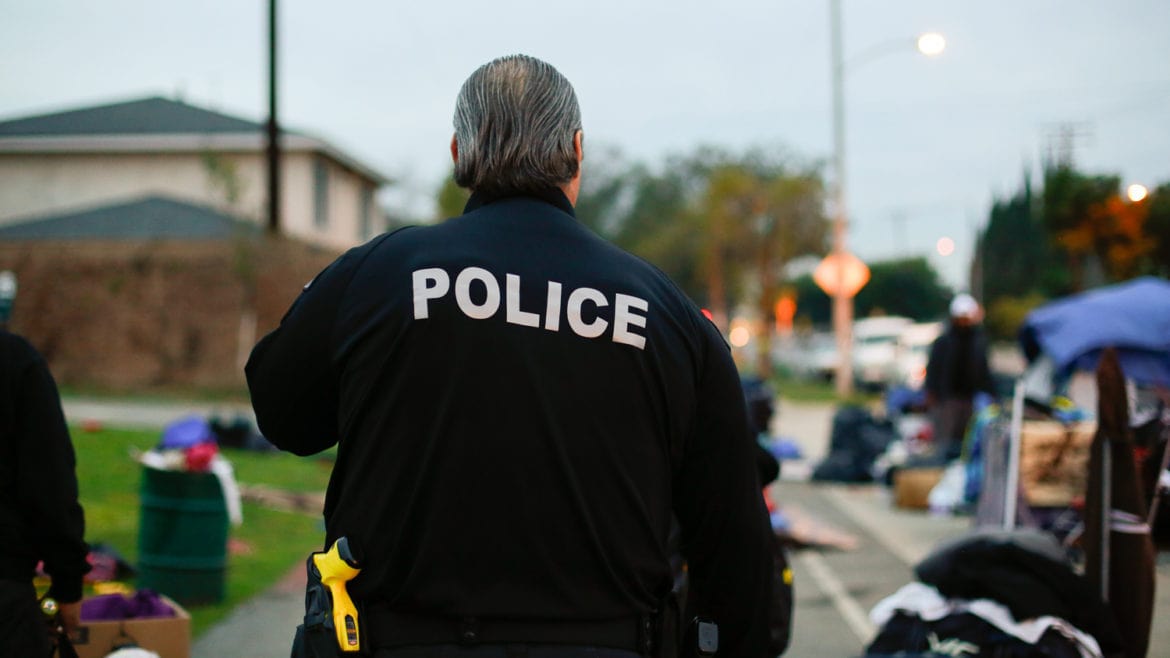 Spending requests for the Anaheim Police Department were among the recent subjects of increased public scrutiny over the last several weeks and months. Pictured are Anaheim officers walking Maxwell Park while clearing it of homeless people in 2018.

After recent protests calling for serious reforms to the way local governments look at law enforcement spending, it appears even the most routine of police contracts at Orange County’s public meetings are coming under public scrutiny.

New vehicle equipment, cell phone tracking technology, and helicopter surveillance camera maintenance in Anaheim, as well as millions in annual OC Sheriff’s Dept. patrol contracts with cities and renewed access to a private shooting range contract for its deputies were among the law enforcement requests granted over the last couple of months by elected county and city officials.

Yet unlike in previous years, those expenses are now getting increasingly questioned by the public — many of them young people — who either flooded local agencies’ public comment lines or came to meetings in person.

At their Tuesday, July 14 City Council meeting, Anaheim officials were greeted by nearly dozens of pages of written public comments objecting to consent calendar items around the destruction of city records, as well as new and old city spending requests for police vehicle equipment and surveillance technology.

Items on the consent calendar are usually seen as procedural or routine, and don’t get discussed publicly by the council before they approve them unless specifically pulled for public discussion.

On Tuesday, members of the public submitted comments opposing new city purchases of nearly $60,000 in maintenance for a high-tech, police helicopter surveillance camera and more than $177,000 in new equipment primarily for police vehicles.

Anaheim Councilman Jose Moreno pulled both contracts off the consent calendar for questions about their funding sources, but was ultimately a “Yes” vote along the rest of the council for both.

At the same meeting, public comments continued to trickle in objecting to consent calendar police contracts that the council approved more than a month ago, at their June 9 meeting.

The spending items were for $100,000 in improvements to 10 police vehicles and $755,000 for “cellular communications interception technology” that enables investigators to locate cellular devices.

Critics in their comments feared the cell phone technology — which city staff said will be used when investigating critical missing person cases, homicides, kidnappings, drug trafficking, and “other serious cases” — could be used to identify attendees at recent police protests in the city.

Staff maintain the technology would be used “within strict guidelines, requiring a court order or a search warrant signed by a magistrate.”

Still, Anaheim residents like Rayan Soueidan argued instead to “invest that money in creating programs that benefit and enrich the community especially during a global pandemic.”

His comment largely echoed those of hundreds of people who submitted identical messages to the council ahead of the Tuesday meeting, despite the items already being approved in a June meeting where council members Moreno and Denise Barnes questioned the contracts while local protests around police spending were popping up in the county.

Last month, routine annual contract renewals for OC Sheriff law enforcement services in 13 cities that don’t have their own police department also were met with pushback by local residents and activists who turned out to a county Board of Supervisors meeting in droves, amid the local and national protests against police killings of Black people in Minnesota and Georgia.

That June 23 turnout — which also drew counter-protesters — came largely out of efforts through social media by local Black organizers and activists and other members of the community, who for weeks said they planned on carrying energy over from the countywide protests calling for local public safety reforms into Orange County’s public agency meetings.

County supervisors ultimately voted unanimously in favor of the annual Sheriff contract renewals, which added up to $151 million across 13 cities, with little discussion despite the slew of public comments that called for reduced law enforcement spending in favor of more investment in other areas like parks and libraries. 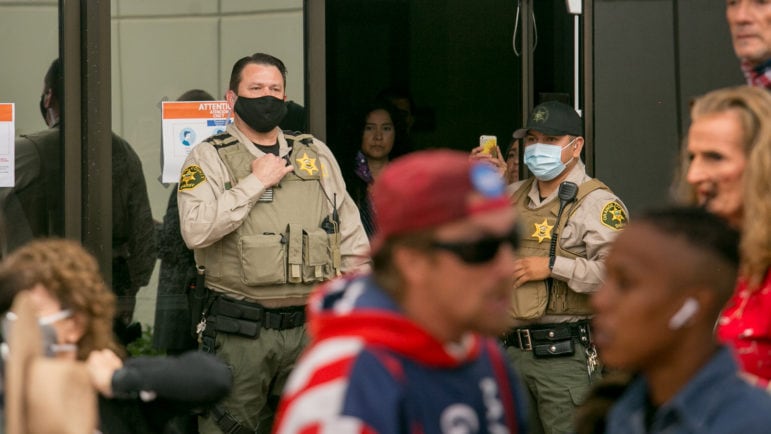 Most recently, young activists and county residents appeared at a Tuesday, July 14 supervisors’ meeting to protest a $45,000 contract with Evan’s Gun World in Orange for sheriff deputies to train at the shooting range facilities.

“Gun World sounds like a fun place for cops to waste our money,” said one public commenter who identified himself only as Patrick.

He said the money should go elsewhere — “not for the county to get better at shooting people.”

County staff in a report maintained that the contract would help officers simulate “reality-based encounters” and scenarios “that test their ability to make critical decisions under stressful conditions.”

Reacting to the protesters, Michelle Steel expressed her gratitude “to the dedicated law enforcement officers in Orange County and to Sheriff (Don) Barnes and his deputies for their hard work everyday to protect our communities.”

“I look forward to supporting these items today and ensuring the Sheriff’s Department has the resources it needs to protect our communities,” she said before supervisors unanimously approved the contract.

“The more young people or people unfamiliar with government start to poke our cities and county and realize where our tax dollars are going, the more we realize the incredible way our systems are built, where we don’t really know who has the power to do what,” she said. “Our Board of Supervisors and city councils are making decisions on our behalf without consulting us or any amount of oversight.”

And much of the public’s recent calls for systemic reform and protests against these routine spending contracts and policies largely haven’t yielded substantial results on the local dais.

In Anaheim on July 14, members of the public and civil rights groups like the American Civil Liberties Union also objected to another consent calendar item proposing the destruction of city records — which included the destruction of police records between 2009 and 2015 like internal affairs investigations, disciplinary files, complaints, in-custody deaths, and officer involved shootings.

“What incentive would the Police Department request to destroy 5 years worth of records of our most violent period in our recent history?” wrote District 2 resident Edgar Arrellano in a public comment submitted July 13, referring to records from the year 2012 — a year that saw great unrest following back-to-back police killings of Latinos in the city.

The police records were among 10 other stacks of records from other city departments requested to be destroyed as part of the city’s “Lighten the Load” program — aimed at improving “efficiency and service” and “storage and retrieval systems” around city record keeping, according to city staff.

Moreno wanted to table the request to destroy the police records to a future meeting.

“Right now the department’s under a microscope, and if we have confidence in that department, we should again, in the interest of the public and ourselves,” continue the item, Moreno said at the meeting. “I’m sure the department wouldn’t be opposed to that.”

His proposal was met with pushback by council members like Lucille Kring.

“I trust the city … I have complete confidence in our attorneys and the police chief,” she said before the council ultimately voted to destroy the police files along with the other records.