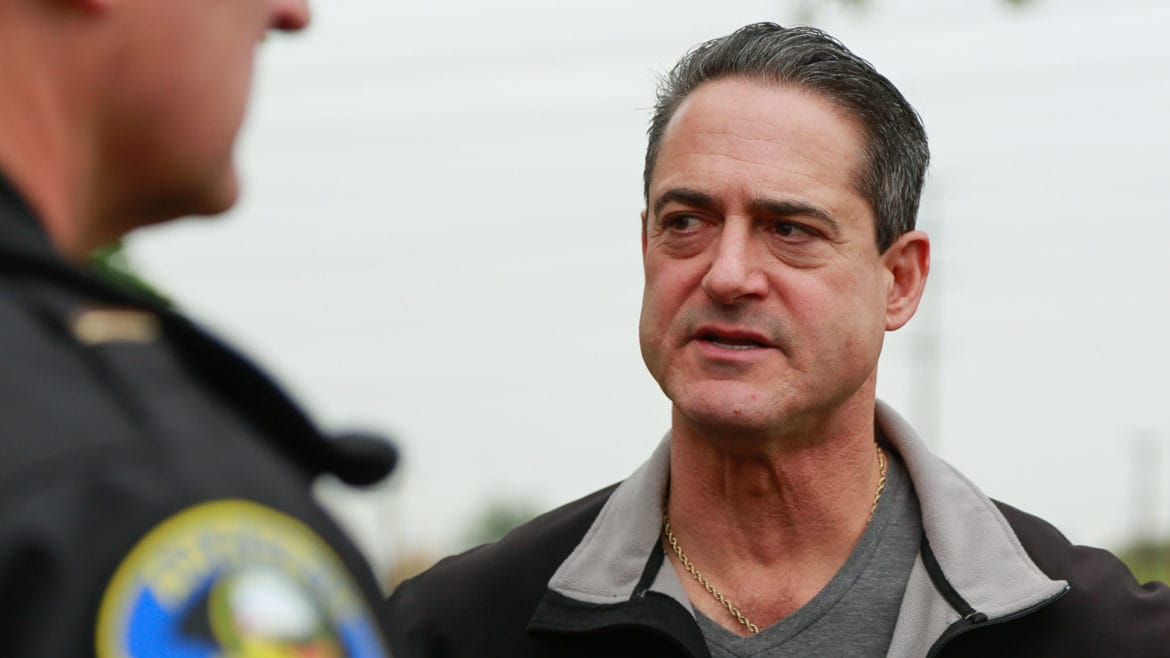 Incoming District Attorney Todd Todd Spitzer during the December 2018 clearing out of a homeless encampment at Maxwell Park in Anaheim.

An internal investigation released this week by the Orange County District Attorney’s Office about two problem prosecutors is also prompting questions about why DA Todd Spitzer, who ran on a campaign against misconduct, kept in place those prosecutors, who led a case that an appeals court said involved “intentional or negligent” withholding of information they were required to provide defendants.

Indeed, an internal probe Spitzer commissioned and released Monday found that two longtime prosecutors he retained – and in one case moved into management – had previously “exhibited prosecutorial misconduct in the performance of their duties and there is clear and convincing evidence that they also committed malpractice due to intentional negligence,” the DA’s office said in a news release Monday about prosecutors’ actions in the 2011 Seal Beach mass shooting case.

The new report confirmed and expanded upon an appeals court’s 2016 findings of misconduct by that prosecution team, led by Dan Wagner and Scott Simmons, with the appeals court upholding a lower court ruling that kicked the entire DA’s office off the case, in what was known as the jailhouse snitch scandal.

Spitzer ran for election in 2018 largely on a platform of criticizing then-District Attorney Tony Rackauckas for not holding prosecutors accountable for their misconduct in the Seal Beach case, with a promise of zero tolerance for violating defendants’ constitutional rights.

After taking office in January 2019, Spitzer moved Wagner to a management position overseeing operations at North Court in Fullerton, and he kept both Wagner and Simmons in the DA’s office for almost a year until they retired in December.

“It’s just embarrassing,” said Paul Wilson, whose wife Christy was killed in the Seal Beach shooting. He supported Spitzer’s 2018 campaign for DA, but says Spitzer has not followed through on the accountability he promised.

“[Spitzer] gave him a complete hall pass. He gave him a high five to what he did,” Wilson said.

“Mr. Spitzer ran on a campaign that constantly highlighted the misconduct of the Dekraai prosecution team, and yet as soon as he arrived he promoted Mr. Wagner to a management position,” said Assistant Public Defender Scott Sanders, who originally brought the misconduct in the Seal Beach case to light.

In response, Spitzer’s special counsel in the administrative investigation said those accused  prosecutors were entitled to due process and that Spitzer did the right thing by directing a comprehensive investigation, which ultimately took 15 months.

“Before the district attorney could take any HR action,…we had to do the job and do the work, and we went through literally thousands of pages of documents, hundreds of interviews,” said Pat Dixon, who previously served as a longtime homicide prosecutor and manager in the Los Angeles County District Attorney’s Office.

“I spent three months sitting through U.S. Department of Justice interviews with many of our prosecutors – I think over 20 of them,” as well as “hundreds of emails,” Dixon said.

“I think it was important – apparently the district attorney felt the same way – that he wanted a comprehensive review of all the conduct, which was complex,” Dixon added, noting the court hearings years ago into the Seal Beach misconduct “took months and months and months.”

“I think everyone deserves due process.”

“When Todd Spitzer moved Wagner from his civil service protected spot that Rackauckas had put him in, back to what we call a grade 5 or an assistant DA, it wasn’t a promotion. And in fact, Wagner [previously] was, as the head of homicide, [in] the most prestigious grade 5 position in this office. And when he was returned to the grade 5 position, it was at the head of one of the branch courts.”

Wagner and Simmons, who left the DA’s office in December and formed their own law firm, did not return phone messages Monday seeking comment.

In an interview Monday, Rackauckas said Spitzer was trying to have it both ways with Wagner and Simmons. Spitzer is now accusing them of intentional misconduct, Rackauckas said, despite giving a speech praising them at their retirement party.

“Not only did he keep them on…they retired,” said Rackauckas, who maintains there’s no evidence of intentional misconduct by prosecutors in the Seal Beach case.

“It wasn’t like a resignation during an investigation…they retired,” he added. “They were there for a year [into Spitzer’s administration].”

“Todd came to their retirement….Todd gave a speech about how great they were. He even talked about the [Seal Beach] case, and that they got a bummer rap on that,” and that they were “terrific guys” and had integrity, Rackauckas said.

Spitzer’s spokeswoman said Spitzer did attend Wagner and Simmons’ retirement party, but that she didn’t know what Spitzer said there because she didn’t attend the party.

“That was 8 months after this investigation began,” said DA spokeswoman Kimberly Edds, noting the administrative investigation started in April 2019 and the prosecutors retired in December 2019.

“So this was a report for [Spitzer], and how would he possibly know what was the conclusion of the report until it was completed 7 months after they retired.”

She said Spitzer didn’t get updates along the way about what Dixon was finding in the investigation.

“That’s why he wanted an independent investigation…it had to be thoroughly vetted,” Edds said.

The report released Monday was written by Dixon and Steve Danley, a former performance auditor at the County of Orange, who were tasked by Spitzer with finding out “what happened, who was responsible, and how to prevent these failures from occurring in the future,” according to the report.

As part of the investigation, Dixon said he sat in on federal civil rights investigators’ interviews of DA prosecutors and reviewed transcripts of the court hearings into misconduct in the Seal Beach case, internal DA emails, and numerous other documents.

“This investigation finds that there is clear and convincing evidence that to a reasonable certainty that indicates Dekraai prosecutors committed malpractice due to intentional negligence,” the report states, referring to the Seal Beach case.

“This finding necessitates the imposition of severe disciplinary action against the prosecutors. However, before the completion of this internal investigation, both Dekraai prosecutors resigned their employment with OCDA and are now outside the administrative purview of OCDA,” it adds.

“The prosecutorial team whose responsibility it is to ensure fidelity to the law, ethical conduct in prosecutions, maintenance of defendant rights, and pursuit of justice for victims, were the very ones who violated informant/discovery law, obfuscated and failed to accept responsibility for their lapses, trampled defendant rights, and denied the full imposition of justice for victims and their families.”

Spitzer and Rackauckas aren’t the only ones getting a second look over their actions in the case.

Kamala Harris was the California state Attorney General – who oversees local district attorney offices – at the time courts were finding misconduct and rights violations in the Seal Beach case and other Orange County cases.

Harris – who now is on the shortlist for Joe Biden’s pick as running mate – later said she was leaving it to the locals to handle.

“I knew misconduct had occurred, clearly it had,” Harris told the New York Times last year. “And it was being handled at the local level.”

Harris’ office didn’t return a message seeking comment Monday on the DA’s new report on intentional misconduct in the Seal Beach case that emerged when she was state Attorney General.

“It’s a travesty,” said Wilson. “It’s just an embarrassment that Kamala Harris [was] sitting in the AG’s office and saying, ‘We’re just going to let the local authorities deal with that.’ ”

When he took office in January 2019, Spitzer promised zero tolerance for prosecutorial misconduct.

“We will not tolerate unconstitutional violations of defendants’ rights in the zeal to get a conviction, conduct that has harmed defendants, harmed our justice system, and harmed victims by resulting in dropped charges and lighter sentences,” Spitzer said at the time in a news release about his swearing in.