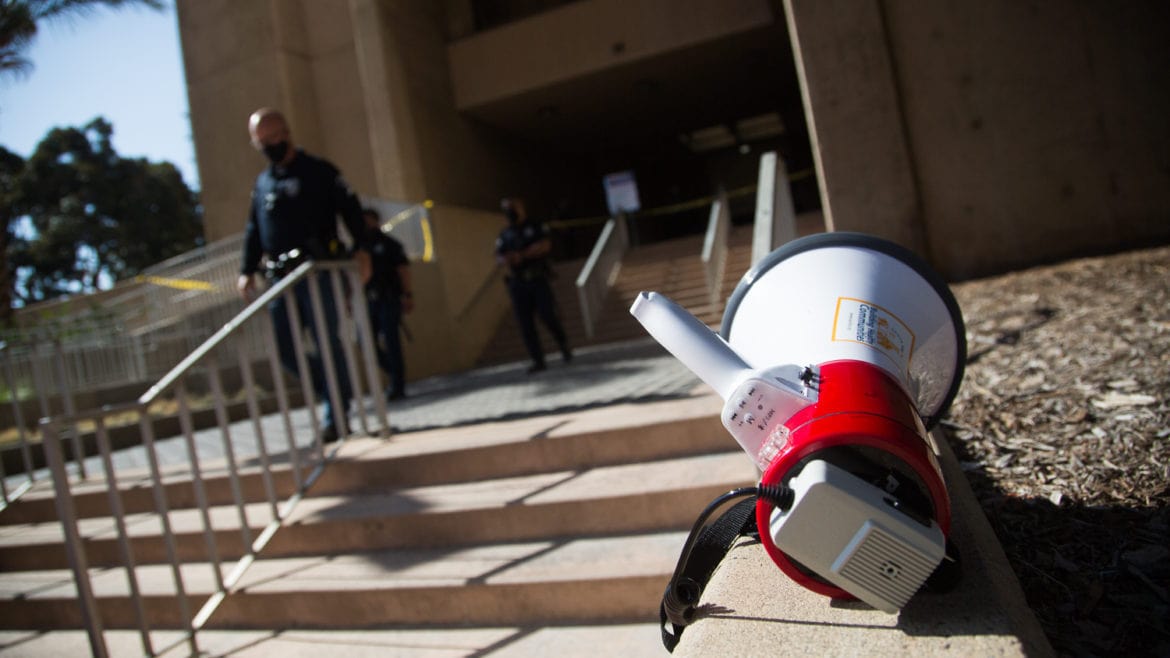 As more and more young people in Santa Ana show up to city council meetings in recent months, many are really learning to appreciate the power of the word “Bullshit.”

While city officials this year smoothed out their new spending plan over late June and early July, residents and young activists protested yet another city budget that put most of its money into police.

One after another, many of the city’s youth opened up at the public dais microphone about their trauma, their stories, about how their lives had been disrupted by Santa Ana police and systemic public safety issues.

None of that seemed to get much of a reaction from city council members, a majority of whom largely ignored their demands when it came time to vote.

Yet it was the use of expletives during the council’s final budget hearing on July 7, broadcast live online and on television, that triggered immediate reactions from City Council members.

During the public comment portion of that hearing, one young speaker who didn’t give a name stepped forward in a bucket hat emblazoned with flames and a pizza pattern t-shirt to oppose the budget that had by then revised its police spending increase down to $3 million.

“You say the reason for investing in the Santa Ana Police Dept. is for the safety of residents, but that’s bullshit,” said the speaker, whose words bounced around the council chambers. “If you cared about the safety of residents, you would take a systematic approach and invest in affordable housing, education, youth programs, scholarships, ending homelessness, etcetera.”

The profanity immediately drew objections by council members like Juan Villegas. The speaker’s remarks and the rest of the meeting were streaming on YouTube and broadcasting live on television, through Channel 3 on Spectrum and Channel 99 on AT&T U-verse.

“Can we remind the public that we can’t have any profanity, because this is being broadcast on Channel 3 and there’s a lot of families watching, there’s little ones, and we need to keep it clean,” Villegas said. “You can voice your opinion, but no profanity please.”

Yet members of the public — four of them, by Villegas’ count in a later interview — continued to swear every now and then throughout the night. Like the previous speaker, they opposed another Santa Ana budget that spent more on police over other areas like youth programs, parks and libraries.

Words like “bullshit,” for many young people, had become a political tool — it had the power to wake officialdom up. 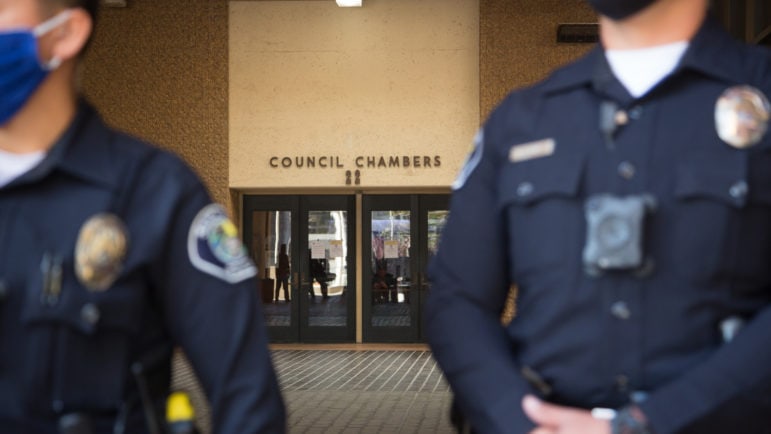 Many young activists, seeing their attempts to protest and lobby for the budget they wanted going unsuccessful so far, say profane public comments will continue to be a tool for disruption and pressure at public meetings, especially when topics around the budget return to the council through mid-year reviews and appropriations requests.

And though a city can respond to disruptive behavior by implementing rules of decorum at meetings, Santa Ana City Attorney Sonia Carvalho said “courts have held that the use of profanity intertwined with political speech is a fundamental protection under the first amendment so speakers cannot be banned from speaking if they use profanity.”

“However, speakers may be constantly reminded of the rules of decorum and may be asked not to use profanity when providing public comment,” Carvalho sadded.

Knowing that public meetings and the comments made during them will be broadcast on multiple mediums, 21-year-old local organizer Citlali Ruiz said it puts the ball in City Council members’ court.

“Young people are in a huge moment right now where we need to get the eyes of everyone by any means necessary, which means if we need to show up to council meetings saying ‘fuck you, this is bullshit,’ that’s what we’re gonna do,” Ruiz said, looking to the recent national and local protests against police violence and law enforcement’s role in public safety.

For four years, Ruiz has been advocating for a budget she feels would be more reflective of her community’s needs.

“I was 17 when I started, and I’m 21 now, and having to do this work every budget cycle is tiring,” she said. “Time after time, we have seen that council members actually don’t listen to young people.”

Other activists like Bulmaro “Boomer” Vicente, a Soros Justice Fellow at local activist group Chispa, said profanity has always been used by activists for disruption in Santa Ana, and they  “will continue to do so.”

Vicente pointed to an incident back in 2014, where a man came to a Santa Ana council meeting wearing a “Fuck the Police” snapback, during a meeting where police officers were set to receive service awards.

The hat prompted council members to review their public meeting rules, and even the police union’s former president at the time, John Franks, requested police officers no longer be recognized for accolades in public anymore.

Writing in a letter to council members, Franks at the time said “the agitators have been given too much of an uncensored podium to express their views.”

Profanity will always cause disruption, Vicente said, adding “It garners the attention of the council.”

Following Tuesday’s meeting, Villegas said his first priority is to “make sure we follow the rules” and that the council meetings don’t run afoul of profanity restrictions on television broadcasting. City spokesman Paul Eakins deferred to the Federal Communications Commission on profanity rules.

“There are a lot of families, we have like 70,000 viewers in the City of Santa Ana that receive this broadcast,” Villegas said. “Young people might express themselves in a way they feel they should, but we’re still obligated to follow the rules and want to make sure we protect the children.”

Villegas added that people can say what they want — “I’m a grown person, but we have to make sure that all families and people of all ages are able to listen to what’s taking place in the public chambers.”

Vicente said council members should instead ask why young people feel the need to get profane in the first place.

It’s a similar question city officials faced at the end of May and beginning of June, when a local protest against the Minneapolis police killing of George Floyd, a Black man, this year prompted Santa Ana police to fire rubber bullets and tear gas at crowds of mostly young people who were launching fireworks and projectiles toward officers at the intersection of Bristol St. and McFadden Ave.

At the end of the night, nearby stores had been looted and tagged with graffiti.

In the morning after, city officials who came to the scene to clean up trash and debris decried the protesters and the looting, while local activists in the wake of the protest challenged officials to question why young people in the city were and have been participating in that behavior.

Mindy Romero of the Center for Inclusive Democracy, who researches civic engagement in communities of color, said the structural inequities are “the real issue.”

“It’s the lack of power pathways, the fact that communities of color are historically still at an incredible disadvantage and those that are in power are almost always seen as not representative of the communities that are struggling,” she said, adding that when the use of profanity is purposeful and executed, “it’s a strategy that does at least give some power — it does force a conversation or an action in reaction to what they’re doing.”

Sometimes it’s the only way, she said.

“There’s a reason why you’re gonna do that, when people feel that normal rules of engagement aren’t going to work – if there’s a strategy behind it, it can be the only thing that’s effective in a very limited set of options.”

Indeed, for local activists like Ruiz, who this year watched another Democratic. progressive majority city council in Santa Ana approve another budget that goes against hours of public comment, there’s only one word that can accurately and truthfully describe what she’s feeling.

And given the stakes for the city’s younger residents, Ruiz and other activists say they don’t plan on shying away from expressing it.