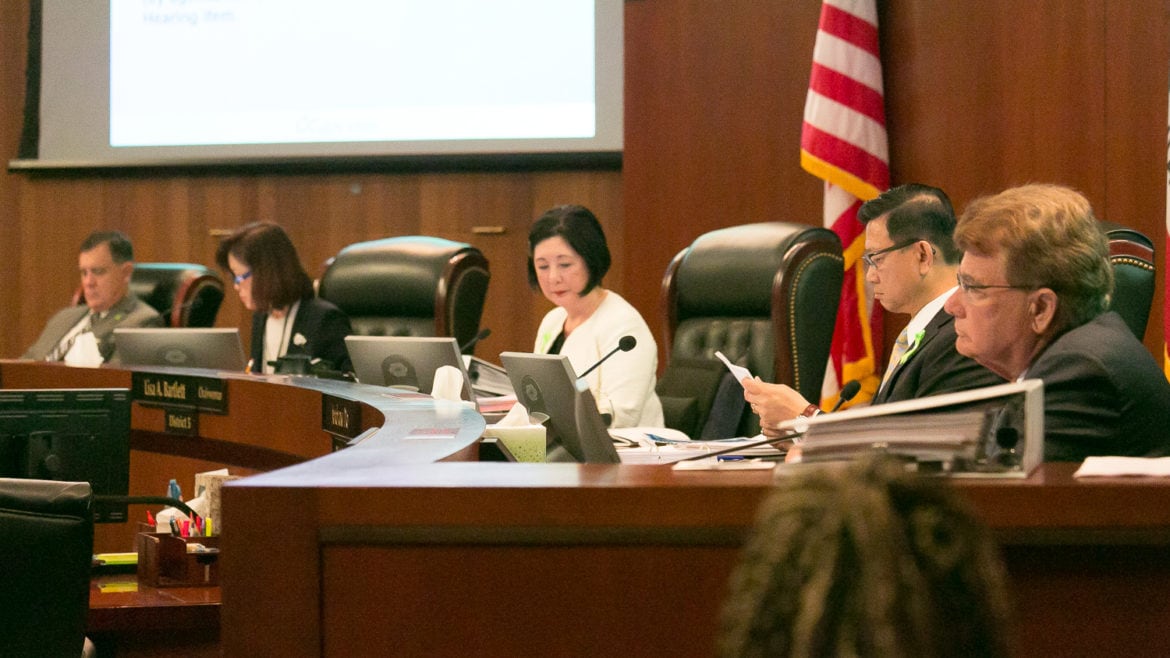 Orange County supervisors have quietly revived a controversial plan to extend the term limits imposed on their offices.

Editors’ Note: For the second time this month, this term limits measure was deleted from the supervisors public agenda on the same morning this column was published.

Today, due to a last-minute add to the public agenda on Friday, supervisors are once again expected to hear a proposal that would ask voters this coming November to consider creating a three-term, 12-year lifetime term limit for county supervisors.

The same proposal was floated earlier this month and pulled back the same morning my original column about the idea was published.

County supervisors – who earn just over $150,000 annually plus health care, 401K, and a pension along with a $700 monthly car allowances – currently serve under a limit of two consecutive terms in office.

But they can come back for another set of terms if they sit out one election cycle.

In recent memory, the only supervisor to return to office after a term was Supervisor Todd Spitzer, who came back to the supervisors dais in 2012 after a stint in the state legislature before ultimately running successfully for DA in 2018. Former State Senator Janet Nguyen – who lost her seat to Sen. Tom Umberg in 2018 – also has an open supervisors’ campaign account.

I wrote about the idea of extending term limits earlier this month, laying out the arguments put forth by the two incumbent county supervisors sponsoring the proposal – Republican Lisa Bartlett and Democrat Doug Chafee.

In an interview for the original proposal, Bartlett – who claims her term in office would not be covered by the change – argued longer terms would allow county supervisors to accomplish more as well as be more active on regional and state panels due to longer terms in office.

Bartlett said she was approached by members of the community who have the desire to keep the current leadership in place given present challenges such as the pandemic and homelessness. Bartlett also was able to secure support for her proposal from the Orange County Employees Association, the county’s largest labor group.

Orange County voters love term limits, Fleischman argued to me, adding that it’s particularly sneaky to propose such a change without a big debate and at the last hour

Fleischman organized conservative opposition to the idea earlier this month and announced to his readers that Supervisors Wagner and Steel were solid no’s on the idea while Supervisor Andrew Do had shifted from a no to an abstention.

“After failing to keep our families, essential workers, and economy safe during this health crisis, the Board of Supervisors are now trying to rush forward a measure that will give themselves longer terms in office,” Contreras wrote.  “This sickening power-grab is just the latest example of how out of touch the OC Supervisors are and illustrates why the existing term limits are necessary. The Supervisors should be focused on responding to this unprecedented health and economic crisis, not how to increase their tenure in office.”

As Contreras’ campaign release indicates, Bartlett and Chafee’s proposal is actually raising some troubling questions about whether it’s actually a good thing to have incumbents in office for that long.

Many observers quietly point to the county’s government’s weak rollout of public services to battle the pandemic along with the revolving door of leadership at the County Health Care Agency in recent months as an example of how badly county supervisors have influenced county government agencies and leadership during this most recent public health crisis.

And it should be clear now to all that while those law enforcement investments performed very well for county supervisors’ electoral fates they didn’t prove too useful for taxpayers during a pandemic.

Now, Bartlett and Chafee’s proposal does raise an important opportunity for supervisors to question what kinds of structural changes and investments might lead to better policy and less politics for local communities.

Supervisors already have an effective blueprint if they want to consider changes in the study groups created after supervisors’ predecessors bankrupted the county in 1994.

Those groups looked at a host of options, such as expanding the number of county supervisors, or making them part time or even electing a county CEO.

Given how controversial the role of a county supervisor has become during the pandemic, it’s arguably time to dust off those reform studies and consider what kinds of changes to the terms and responsibilities of county supervisors make sense.