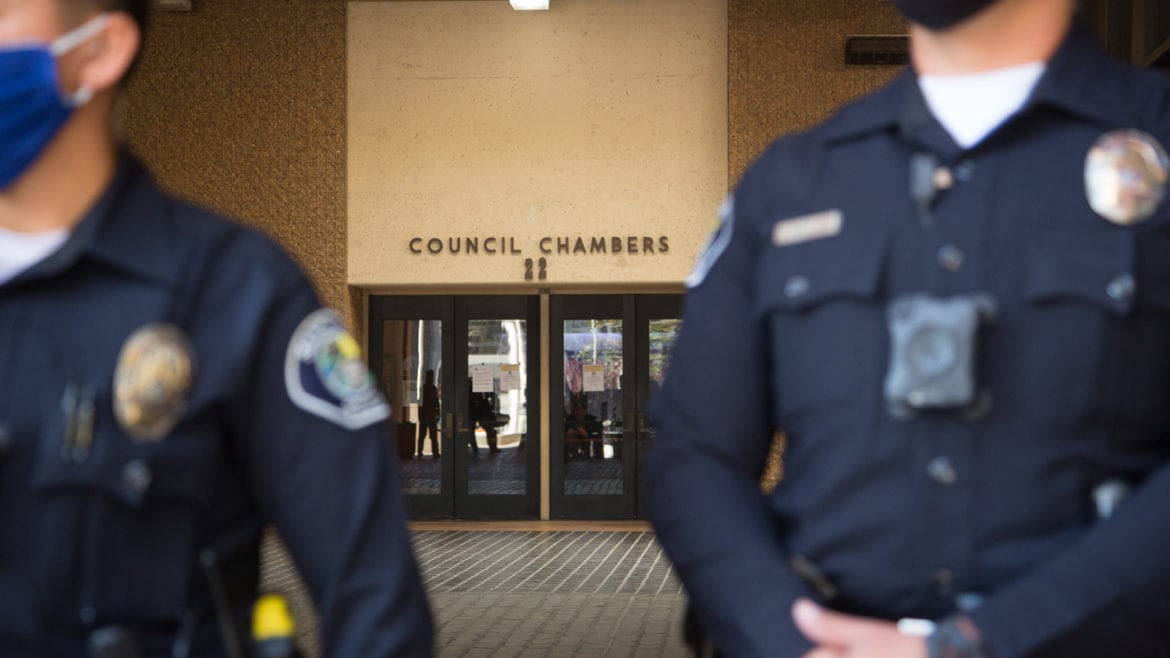 Police guarding Santa Ana City Hall during a contentious public hearing on the city's budget and police spending on June 18, 2020.

Santa Ana officials are on track to give final approval to a new city budget that increases police spending by millions and slices an undocumented immigrant legal defense fund in half — despite community leaders’ and activists’ calls to reverse course.

The City Council voted 5-2 to preliminarily approve the budget during the first reading on June 18 with council members David Penaloza and Vicente Sarmiento dissenting. They cited a $9 million police department spending increase amid a national and local movement for public agencies, like counties and cities, to retool their budgets to spend more on other areas like parks, libraries and youth programs.

Now the budget and its police funding priority is on track to be finalized in a second reading at the council’s July 7 meeting, as activists make a last ditch effort to change some officials’ minds by drawing support through social media and public protests.

Among organizers’ demands: reallocate millions from the police department to other community services and provide additional funding to the city’s Legal Deportation Defense Fund, which was established in 2017 and provides attorney services to undocumented immigrants in Santa Ana facing deportation.

The defense fund is set to receive $100,000 in the new budget, or half of what it got the previous year.

“There are a lot of unanswered demands,” said Hairo Cortes, executive director for Santa Ana’s Latino political online organizing venue Chispa, lamenting what he fears are requests by the public that are “falling on deaf ears.”

Organizers like Ruben Barretos, director of the group Santa Ana Building Healthy Communities, called on the budget’s critics Sarmiento and Penaloza to make greater public efforts on the dais to persuade their colleagues to change their stance.

Barretos dismissed their “No” votes on June 18 as merely “symbolic” while the majority support for the budget on the council was clear. He added that both dissenting council members were in support of $25 million in police salary raises granted by council members in 2019, increases that have been put on hold this year pending the financial impact of the COVID-19 pandemic to the city.

Sarmiento in a written response to questions said he hasn’t seen any proposed revisions to the budget to be considered at the second reading. He didn’t respond to questions asking whether he’d be more vocal about his opposition to the spending plan on Tuesday or whether he’d publicly challenge his colleagues at the meeting.

“The hundreds of residents that contacted the City Council for the past few meetings, I believe, continue to demand that we adopt a more balanced and proportional funding approach to addressing the many needs in the city,” he said.

He also agreed that the immigration defense fund should receive more money, but said “we now have data that demonstrates that the Legal Deportation Fund has been an effective effort to prevent our immigrant families from being separated.” 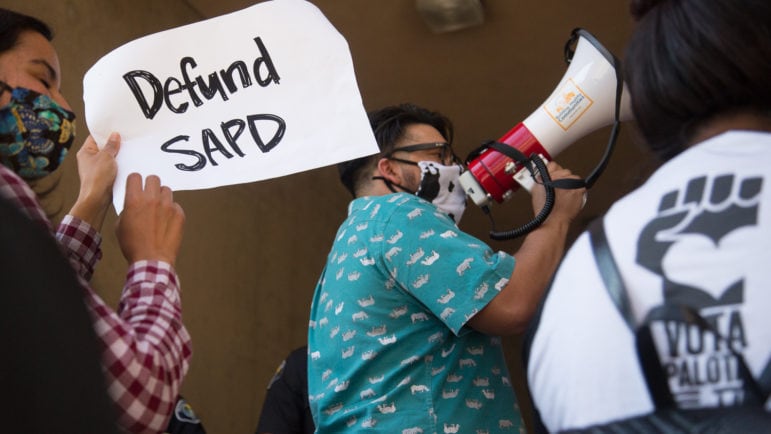 The city’s proposed spending on police has its supporters in council members like Jose Solorio, who’s running for mayor in November and has the police union’s support.

At a June 16 meeting, Solorio said while there’s a need to “equalize” aspects of the budget and there are instances of some police officers’ equipment being “overly militarized,” he pushed back on the notion of reducing law enforcement spending.

At that meeting he pointed to areas like Community Development Block Grant money and cannabis tax revenue going to youth services.

But where cannabis tax revenue was indeed expected to rake in $10 million this past fiscal year and have $7 million set aside for the enhancement of city services, about $3 million of that $7 million is going specifically to youth services while, for example, $1.4 million is going to police and the rest to other city departments relevant to cannabis laws and planning.

At that meeting Solorio also pushed back on the idea of a police oversight commission for Santa Ana, which is currently being studied by city staff. Solorio defended oversight systems in place for officers: “We have all our frontline officers wearing body worn cameras — that’s good.”

City staff have been pursuing concessions by the union, which was on track to receive an incremental pay raise of 4% in July but renegotiated down to 2% and deferred implementation to January next year. After two separate votes among union members on the raises, city spokesman Paul Eakins on Thursday said the city was informed the union approved the labor concession, so it’ll come before the council for final approval Tuesday.

Meanwhile, the city is instituting a new public comment format, after a fiasco at the council’s first budget reading where more than 20 members of the public calling into the meeting got backlogged through a technical error and had their speaking times cut down to one minute by Mayor Miguel Pulido.

Now public comments will take place at the beginning of the meeting, instead of the years-long and controversial city tradition where speakers were forced to wait as late as the next morning to make general comments after council members got through hours of city business, policy decisions and discussion.

And no longer will members of the public make their comments by phone. Starting Tuesday, public comments will be taken in person at the meeting, where speakers will fill out a comment card and then speak at the microphone inside the council chambers. Seating inside the chambers will continue to be off limits due to the pandemic.

Though the new comment rule has its critics in local activists like Roberto Herrera, a director at the organizing group Resilience OC, who in a July 2 Facebook post called it “an attack on our ability to provide public comment” while coronavirus cases surged throughout Orange County last week with Santa Ana leading all cities with the highest number of COVID-19 cases.

“Intentional or not, this is going to result in less public and civic engagement at a time when community members and the general public agrees to #DefundThePolice,” Herrera wrote in the Facebook post.

City spokesman Eakins on July 2 responded to the concerns by saying “we will have a lot of precautionary measures in place, and we’re not allowing people to sit in the council chamber.”

In a post on the city’s website, staff say all city employees and members of the public who attend public meetings “must wear a mask or face covering and maintain a physical distance of 6 feet from persons who are not members of the same household when inside the chamber.”

And for those who don’t want to mask up, staff said they welcome emailed public comments.