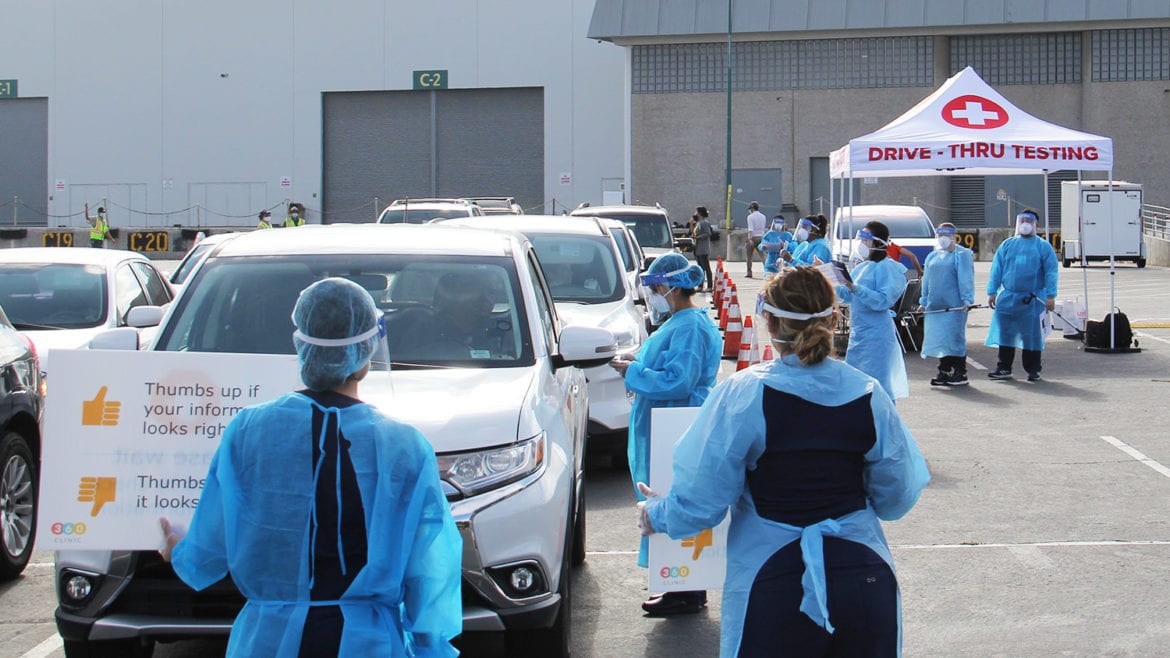 Drive-thru testing at the county's testing "super site" at the Anaheim Convention Center on July 15, 2020.

Orange County Supervisors decided on Tuesday to set aside some of the coronavirus testing at the Anaheim Convention center for elementary school teachers and students if state health officials allow classroom reopenings, which now depends on questionable countywide positivity rates.

“The case rate and the testing positivity rate were lower than we anticipated they should be,” said interim county health officer Dr. Clayton Chau at Supervisors’ Tuesday public meeting.

He said he expects the backlogged results should be reported later this week by the county Health Care Agency.

“What we are getting right now, it’s not accurate numbers?” asked Supervisors Chairwoman Michelle Steel.

“That is correct ma’am,” Chau responded.

Supervisor Andrew Do, who brought the convention center testing item to the board along with Supervisor Doug Chaffee, said a testing and contact tracing plan needs to be in place for elementary schools to reopen.

“Part of the requirement in the waiver application is the testing capability of students and staff and we want to facilitate schools reopening and encourage in-person learning. So the county assistance in providing that testing capability for schools is really important,” Do said at Tuesday’s meeting.

“What we’re doing here is exactly what people want in the community which is to try to get children back in school as soon as possible.”

Since the pandemic began in March, the virus has killed 734 people out of 41,578 confirmed cases, according to the OC Health Care Agency.

For context, Orange County has averaged around 20,000 deaths a year since 2016, according to state health data. According to those same statistics, the flu kills about 543 people over the course of a full year.

As of Tuesday, 441 people were hospitalized because of the virus, including 141 in intensive care units.

Nearly 500,000 tests have been conducted throughout OC, which is home to roughly 3.2 million people.

But the waiver process, along with any potential business reopenings, was halted by state health officials until the testing backlog is sorted out. The elementary school waivers are for counties that sit on the state’s coronavirus watchlist for hospitalization, death and virus case trends.

OC has been on the list since the beginning of July.

At a Monday news conference, Gov. Gavin Newsom said he doesn’t expect big changes to that list once the test backlog is cleared.

“I should say this, I don’t expect dramatic changes in the monitoring list,” Newsom said.

Newsom acknowledged the difference in virus spread in Orange County, with areas like Anaheim and Santa Ana being hit hard by the virus, while South OC cities aren’t seeing the explosion in cases like North County did.

“Within a county as large, as particular, as Orange County, I think a poster child for exactly the kind of nuance that needs to be considered as it relates to that strategy,” Newsom said in response to Voice of OC’s questions..

Secretary of the state department Health and Human Services, Dr. Mark Ghaly, said counties first need to have less than 200 cases per 100,000 residents before considering the elementary school waivers, despite differences in positivity rates in OC.

Meanwhile, Chau said he expects the elementary school waiver process to resume at the end of the week.

Supervisor Don Wagner also said the stepped up testing program is needed for school reopenings, despite ideological differences echoed by some residents during the public comment portion of the meeting.

“Regardless of what you think about the testing regime and where we are, the fact is we are in a regulatory environment where our schools will not be able to open if we do not have a sufficient testing regime in place. That’s one of the state’s criteria for the waiver. We have to do this.”