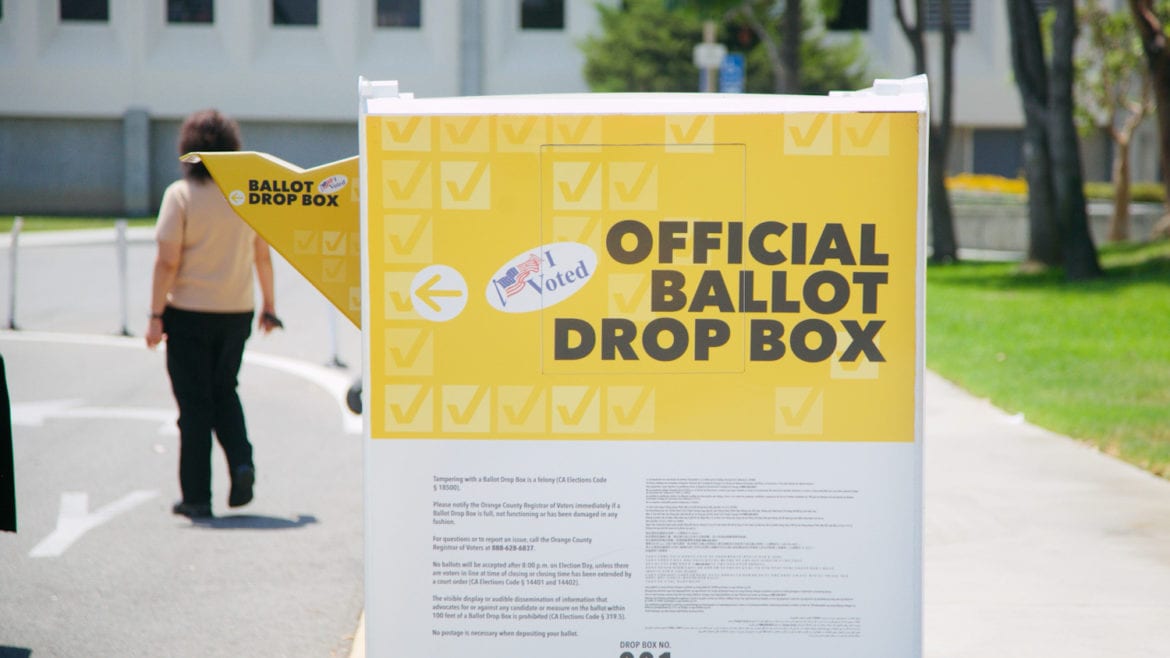 An ballot drop box in front of the Orange County Registrar of Voters headquarters in Santa Ana on Tuesday, Aug. 18. 2020.

Orange County elections officials are planning for more ballot drop-off boxes in south Santa Ana, a crowded and public transit-dependent stretch of one of California’s densest cities, after council members last month voiced concern about a potential voter access “desert” in the area.

The boxes allow voters a simpler way to cast their mail ballot by dropping them off, as opposed to mailing it through postal services, at a time where controversial changes and cutbacks to the U.S. Postal Service have caused delays while in-person voting will likely be less attractive to residents during a novel coronavirus health crisis and its restrictions on human interactions out in public.

The health concerns are especially the case for Santa Ana, a city that’s seen some of the highest confirmed infection numbers in the county and has a predominant Latino population, which is known to be disproportionately impacted by the virus.

After outcry among city officials — and a public grilling of one of the elections office’s operations managers during a recent City Council meeting — the Registrar revised its plan to now include five drop-off boxes in the south end for residents to access in the November election, including the Registrar’s Santa Ana headquarter building itself.

New drop-off boxes are planned for the Centennial Education Center off Edinger Ave, Carl Thornton Park off Segerstrom Ave, and Bomo Koral Park off MacArthur Blvd — on top of the already  planned boxes at Memorial Park and the Registrar’s office.

Here are the drop-box locations elections officials had previously planned (not including vote centers) for the city’s south end:

A screenshot of the OC Registrar of Voters’ proposed ballot drop-off boxes in Santa Ana showed only one new box proposed for the south end.

Here is the Registrar’s map of the revised plan for drop-off box locations (includes vote centers): 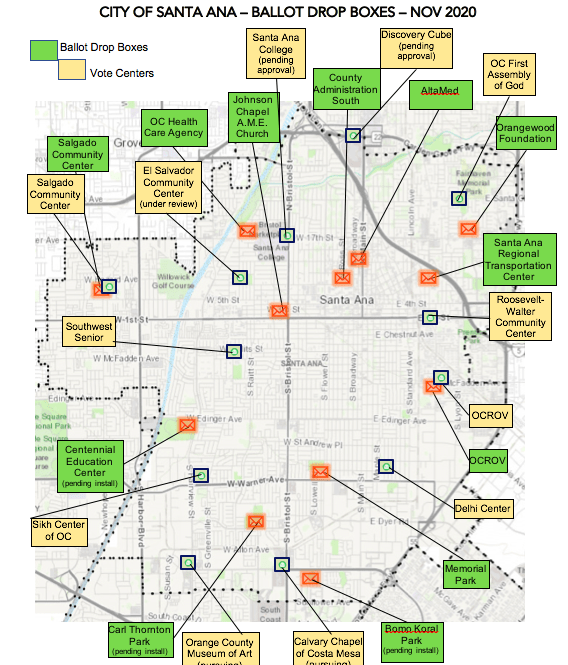 There are also seven vote centers planned for south of First Street, which will still give residents the option of voting in person but will be open for only four to five days leading up to November 3, rather than 11 days.

(For more information on this year’s coronavirus election changes and health safety precautions being taken, read: How is Coronavirus Changing Voting? A Q&A With Orange County’s Elections Chief)

The revised plans were presented to Santa Ana City Council members on Aug. 18, by Justin Berardino, operations manager for the Registrar.

“We’ve already received some, back with some modifications, so although these are not all confirmed yet, we’re making good progress on procuring the vote centers throughout Santa Ana,” Berardino said.

Council members like Phil Bacerra and David Penaloza at the Aug. 18 meeting praised what they said was a “dramatic improvement” over the initial plans that Berardino had presented to the council during the previous month.

In July, council members immediately called out what they said was a problem with a plan for only one new voting ballot drop-off box proposed for an entire area of the city south of First Street — an area officials said is one of the city’s densest and most public transportation-dependent — at Memorial Park, aside from the Registrar of Voters’ office itself.

“As of right now, you have a dense population south of First Street; many of those dependent on (public) transit; many of them walk to the store, to the parks,” said Bacerra to Berardino, who had presented that initial plan to the council at the July meeting. “And to just completely leave this as a desert when it comes to the availability of a ballot drop-off location, again I’m gonna say, is very unacceptable.”

Berardino told the council the drop-off box planning is based on historical voting patterns and the willingness and availability of existing property owners to have the boxes installed on their land.

Nationwide postal data shows that in one zip code spanning the city’s south end, 92701, residents use public transportation to travel more than most areas of the entire U.S.