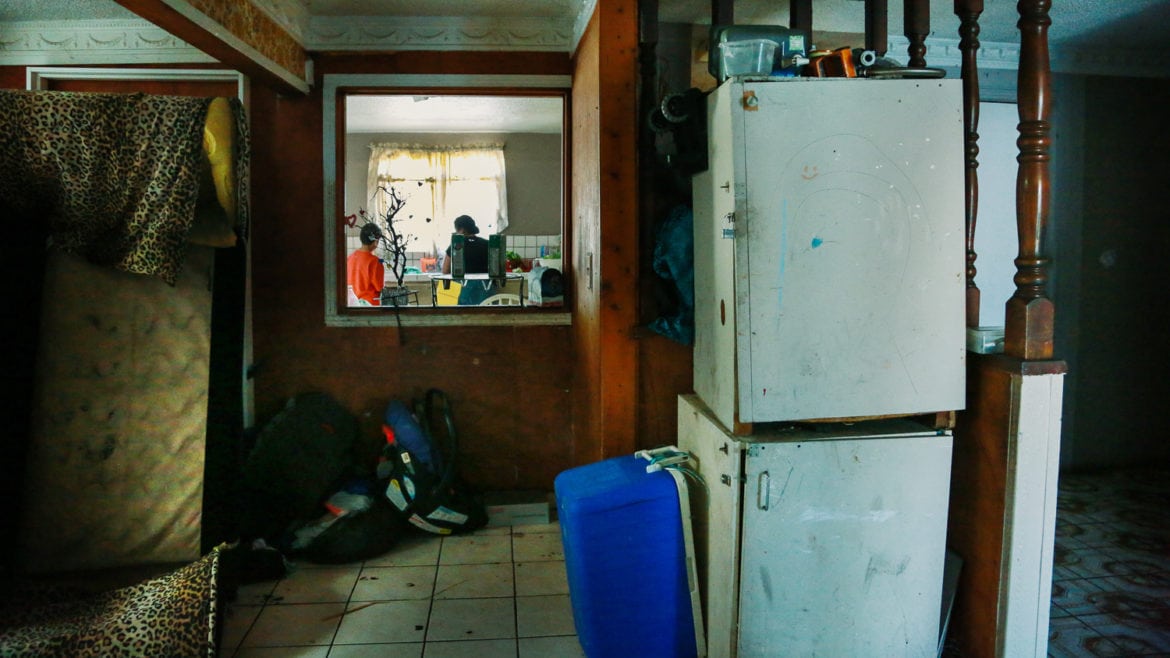 A mother and son wash dishes in a communal kitchen on April 17, 2017. This particular home has ten rooms. Each room houses a family. The living room has six refrigerators and two couches.

Orange County nonprofit community groups and some county officials are not only looking to address the disproportionate coronavirus impacts to the county’s hotspots throughout Anaheim and Santa Ana, but a host of other issues these working class communities face.

The virus is hitting working class Latino neighborhoods especially hard because many residents are essential workers, like grocery clerks and warehouse distributors, while they wrestle with trying to quarantine in overcrowded housing.

“What is the positivity rate in Dana Point… in places that have somewhat controlled the pandemic?” Bracho said in a Monday phone interview. “No data is of value if you don’t compare that with something.”

Orange County Supervisor Andrew Do, who represents much of Santa Ana, last week at the county supervisors’ regular public meeting, talked about a new contract with the data firm, Advance OC, which aims at layering health and other data in a mapping system so officials and Supervisors can better direct public health efforts.

“How do we bring data from all of the disparate reports that we have prepared, all of these community indicators data that we have accumulated and prepared at numerous reports at the County?” said Do at last Tuesday’s meeting before supervisors unanimously approved the contract.

“Going forward, we will have … tools like the equity mapping services, which is basically a needs assessment tool that we have,” said Do, who’s facing reelection this November.

Bracho has been advocating for data mapping tools, like Advance OC, since well before the pandemic began, which she said has laid out all the inequalities various communities in OC face.

She said if researchers overlay maps showing lack of access to preschools, along with juvenile incarceration and probation rates, it would closely mirror the virus hot spot map.

“If you get both and you map it, it’s the same place,” Bracho said. “Those are the same hot spots. Same hot spots for places with no affordable housing. If you do the housing need map, same thing. So we have to be able to have that data everywhere and this conversation on equity.”

Do, in a Monday statement, said the new mapping tool will help officials address not just virus disparities.

“This new mapping tool will help direct Orange County’s response to the health and social welfare disparities that have made minority groups disproportionately susceptible to the ravages of the COVID-19 public health threat,” Do said.

Meanwhile, the virus has now killed 651 people out of 37,813, according to the county Health Care Agency.

Anaheim and Santa Ana, while making up roughly 20 percent of OC’s residents, account for 36 percent of all Orange County cases.

There’s 555 people hospitalized, including 175 in intensive care units. Nearly 460,000 tests have been conducted throughout OC, which is home to roughly 3.2 million people.

While exact hospital numbers haven’t been disclosed by county or state officials, the state Department of Public Health website shows hospitals in central and north county have the most cases.

Some residents who were tested by some of the community test sites told Voice of OC they had a big delay in getting their results.

Bracho said it’s because the tests used to run through Quest Diagnostics, which was overwhelmed not just from OC testing, but across the country. The county has since contracted with CARE Ambulance to administer the tests and are using a different lab to avoid the delays at Quest.

“We’re using another lab that is taking two to three days. Sometimes even one day, so we are super happy. Because that is what’s going to allow for contact tracing. Because if you don’t get your results on time, it’s a little bit useless,” Bracho said.

Quest Diagnostics, in a statement, said the company is boosting its turnaround time and noted the increased demand caused some delays.

“…we have recently increased capacity through several lab innovations. These include the use of specimen pooling, which is now in place at three of our laboratories, and improvements in RNA specimen extraction.* We have also expanded our lab referral network to include a half dozen laboratories to facilitate greater access to COVID-19 molecular diagnostic testing,” said a company spokeswoman in a Monday email.

Bracho said, through the partnership with the county, the community group is able to get infected people isolated in motels and the promotores can bring them food. The Washington Post this past weekend featured the efforts of the partnership in a video post.

UC Irvine, partnering with the county Health Care Agency, Latino Health Access and other community groups is also training over 400 of contact tracers, with a focus on health equity. The efforts will bolster the over 200 tracers currently used by the health agency.

“Training people to understand that you can do contact tracing with equity with the understanding that people you might be calling might not have the resources to get quarantine or get food,” Bracho said.

“We almost cried. Because when we saw the results were coming in a few days, now we can support people with their results and now we can actually contact them and ask about contact tracing.”