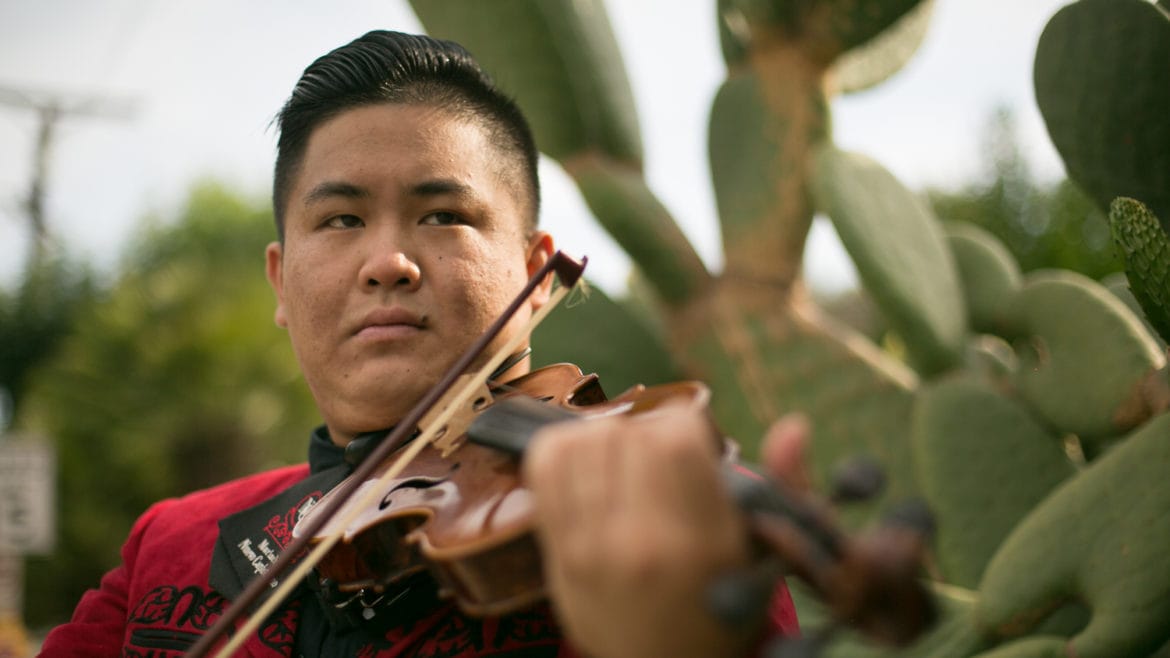 Kurt To picked up the violin when he was five years old. Little did the 22-year-old know that his classical training would lead him to play weekend gigs as a violinist with Mariachi Nuevo Capistrano, a mariachi band based in Orange County.

The Vietnamese American musician grew up in San Juan Capistrano, in what he describes as “not your traditional Vietnamese family.” Though he was largely influenced by Mexican culture growing up, the love and talent for music was genetic.

His father and grandfather were musicians themselves, and both of them showed Kurt unwavering support in his pursuit of mariachi music.

Coming from a classical background, To didn’t realize it then, but by the time he was a high school senior who played in a band that won first place during his first mariachi band competition, he was hooked on the beauties of mariachi-style music.

Since 2004, Mission San Juan Capistrano has hosted a judged event called the Battle of the Mariachis. The event is a festival that hosts a mariachi competition for bands all across Southern California competing for cash prizes.

What started out as a fun way to connect with his friends changed the course of his music career. Prior to joining a mariachi group, he considered dropping his instrument.

“I felt like if I didn’t have mariachi, I probably would have quit my instrument because I was slowly getting older,” To said.

As To matured, his love for mariachi continued to blossom and prosper, creating a passion he doesn’t see himself growing tired of.

While To was still brand new to the mariachi scene in high school, he soon discovered that it wasn’t just the music he fell in love with, but the different people who helped make up the music scene.

“What’s crazy was when I got (to Mission San Juan Capistrano), I was like, ‘I’m not the only non-Hispanic, non-Latino person here,’” To said. “I was like, ‘Wait a minute. This is more inclusive than I thought.’” 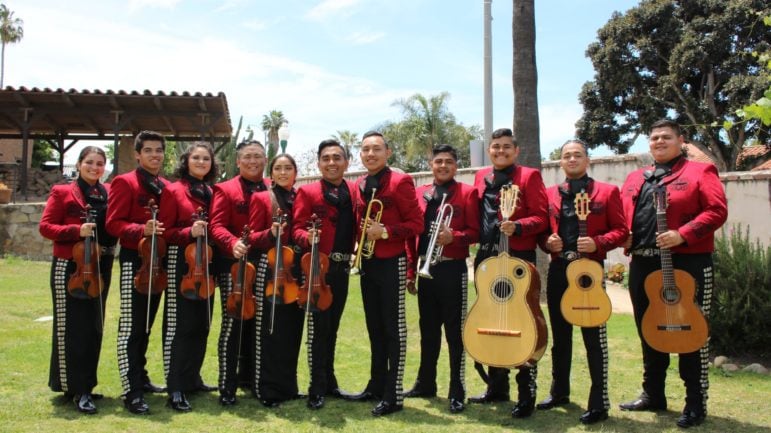 The members of Mariachi Nuevo Capistrano

Now, To is more vocal as a member of the group. And he found his signature solo song, “Hermoso Cariño,” originally sung by mariachi icon Vicente Fernández.

“Hermoso Cariño” is a soulful love song that floods audiences with nostalgia and admiration, and it reminds To of his roots. In four short years, he has progressed from someone in the chorus to finding his voice in the music and performing solos.

Daniel Muñiz, To’s current bandmate and best friend since the sixth grade, invited To to play in his band, Mariachi Nuevo Capistrano, for the Annual Battle of the Mariachis in 2016.

“Kurt has always been the type of person to be down for a lot of things, to be willing to go out of his way to try new things,” Muñiz said. “And when it comes to new experiences, he gives it his all.”

And To did nothing less as he swept first place in both the 2016 and 2017 Battle of the Mariachis. After a short break, To officially started gigging with the band in 2019 and has been performing with them ever since.

The band goes gig to gig, not knowing what kind of crowd they will be performing for; once they performed for an audience of two. But variety is the factor To loves most about performing mariachi gigs, as it gives him and the rest of Mariachi Nuevo Capistrano the chance to expand their library of music and never get tired of their performances.

Mariachi Nuevo Capistrano’s gigs are like improv performances, because most of the time the audience is requesting songs from them. While being a human jukebox is no easy feat, Mariachi Nuevo Capistrano rises to the challenge as they pull out their phones, listen to requested songs and perform the best they can by ear, To said.

“It’s always different every single day, which is the beauty of it. If we played the same 20 songs every day, we’d get bored,” To said.

In the short three months of twice-a-week practices leading up to his first performance, To came to realize the myth of exclusivity in music.

“I thought it would be hard, but it’s not as difficult as I thought to transition into mariachi music,” To said. “Definitely having a strong foundation of music in general helped me with that.”

More to his surprise, that first performance showed To that mariachi is enjoyed, performed and celebrated by many different people.

“I think from that point I was just comfortable with it because I know other people are interested like me. Besides the Spanish, music is music. Jazz, classical, there are no barriers there,” To said. “When I first started, I felt like a novelty. But I know myself. I’m here for the music.” 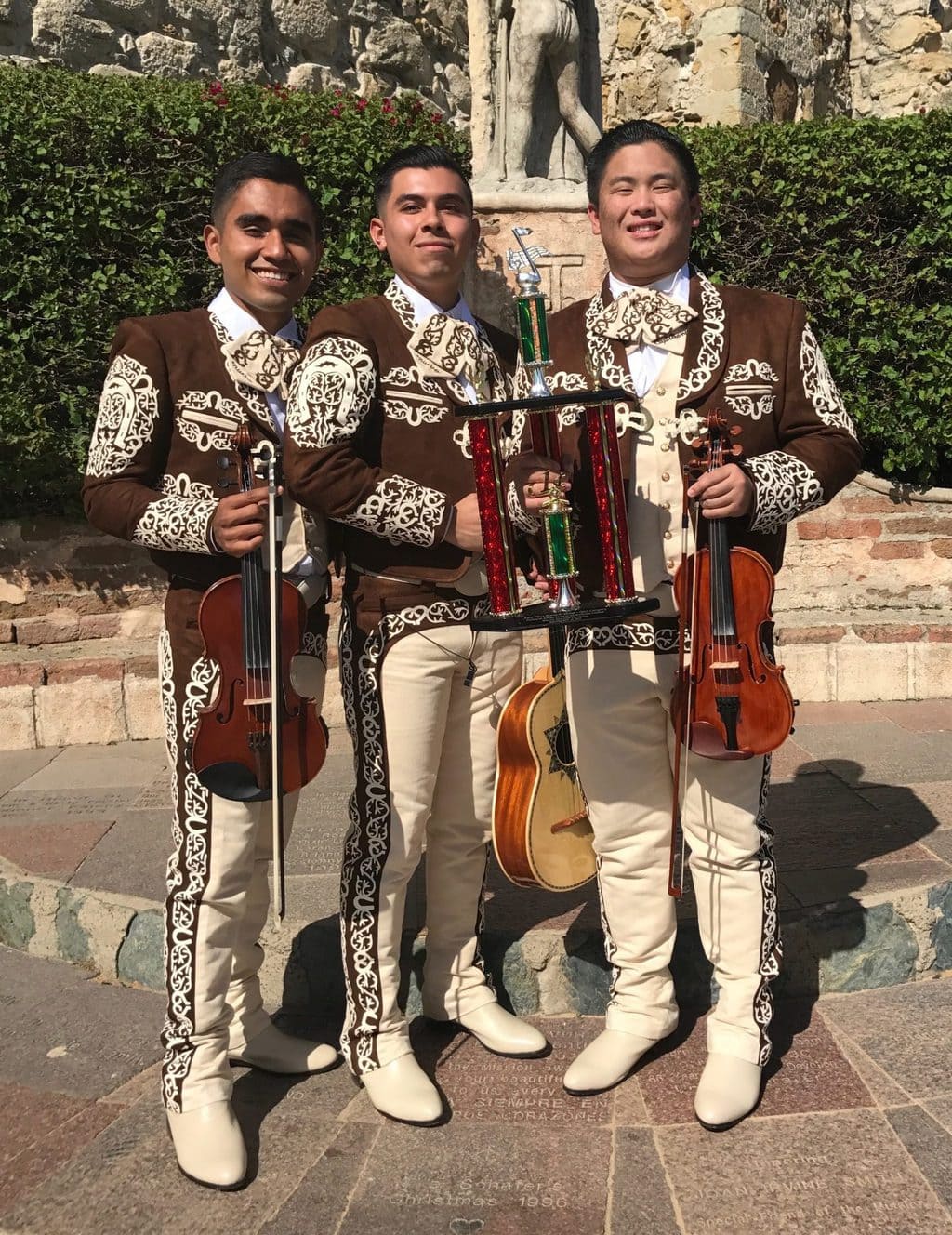 Photo courtesy of Kurt To

Kurt To, right, with his Mariachi Nuevo Capistrano bandmates after winning the first place trophy for best mariachi band in the open category at the 2017 Battle of the Mariachis competition in San Juan Capistrano.

To said he was initially nervous about being visibly Asian in a genre of Mexican music because he did not want to be misunderstood for appropriating the culture. Similar to his experience at the 2016 Battle of the Mariachis, however, that fear has subsided.

“It’s crazy because some families literally don’t care. Maybe someone will come and be like, ‘It’s really cool, I like that you’re doing this,’” To said.

To’s membership in the band has not only been a musically enriching experience, but an educational one. Most times, To said there would be at least one person at his gigs pointing him out and calling him “chinito” in Spanish, which translates to “Chinese person” in English.

“And technically the term they use is not degrading, but it’s not the best term to use. I don’t take it as offense because they’re not trying to hurt me, they’re only making fun of me,” To said. “Once I speak Spanish, that’s when the barrier is cut. Like literally, ‘Oh, you’re one of us.’”

Muñiz and the other bandmates can also attest to To’s positive presence in the band, declaring him the energy of the group and of the room.

“He just has this contagious energy about him,” Muñiz said. “Our other members were just really excited to have him so I guess it’s just another testament to how Kurt really does bring happiness to just any room.”