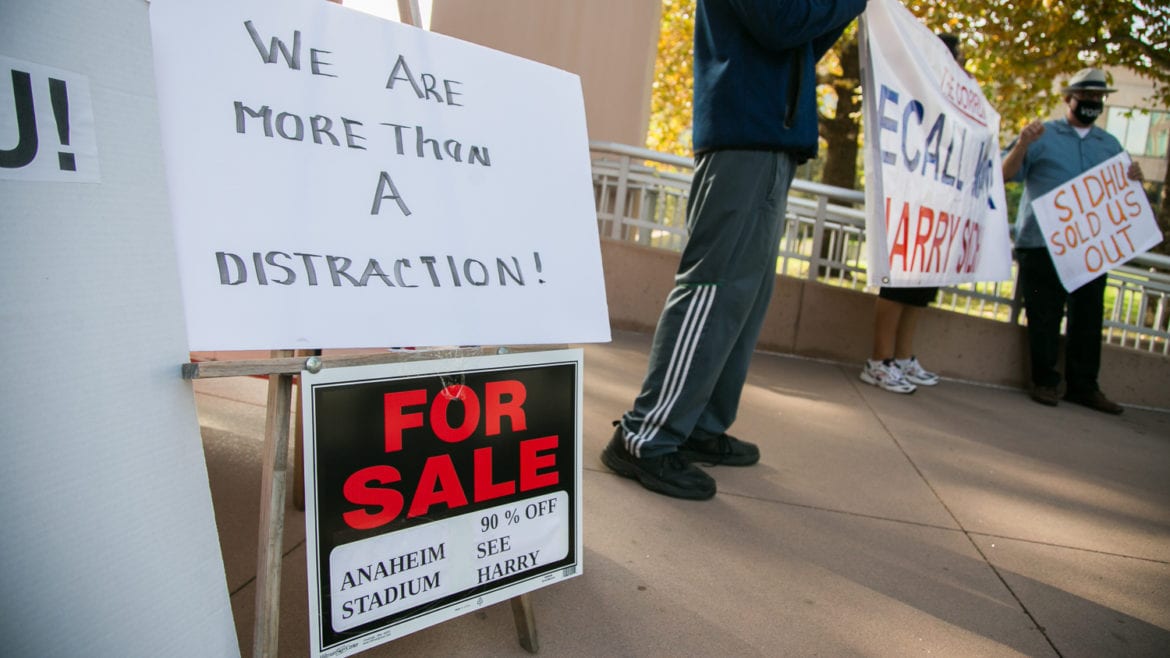 The People’s Homeless Task Force OC protest on the steps of Anaheim City Hall on Sept. 21.

Anaheim City Council members have sold Angel Stadium and the roughly 150 acres around it to a freshly minted company headed up by team owner Arte Moreno.

A 5-2 vote, which went into early Wednesday morning, finalized the sale, which has been marked by secrecy and lack of public discussion by the council majority. Council members Denise Barnes and Jose Moreno (no relation to Arte Moreno) dissented.

Throughout the negotiation process, which lasted over a year and a half, a majority of City Council members fought back nearly every attempt by Barnes and Moreno to publicly debate specifics on the deal.

The two also unsuccessfully tried to delay the vote until the Council meeting chamber could be either reopened to the public and the Council meets in person, or the meetings could be held through video conference with residents having the ability to give live public comment.

“We’re in the eleventh hour. We’ve been talking about this for a year and a half. And we’ve had over 30 meetings where this has been mentioned,” Councilman Trevor O’Neil said.

There were only two public meetings last year when the Council discussed specifics about the deal.

One was a vague discussion last August about what council members wanted to see out of the deal and the other was a late December meeting when the initial land sale agreements were approved.

Arte Moreno’s company, SRB Management, is expected to take ownership of the land late next year. And it could take up to nearly five years before the city sees all of the $150 million because of a payment schedule.

The decision to switch from a lease situation to a land sale late last year was also done in secret.

“Did the city council direct you at any time to move from a lease … to entertain a sale of the property?” Moreno asked City Attorney Rob Fabela, who’s on the city’s negotiating team.

“Other than on Dec. 20 when the City Council voted … no,” Fabela replied.

Mayor Harry Sidhu is also on the negotiating team, after he got himself appointed to it last year.

Responding to Moreno’s questions, Sidhu said he was only directly involved in the negotiations about 10 percent of the time.

“Other than that it was all legal matters,” Sidhu said. “The majority of time it was the city staff and the outside consultants involved.”

However, later on in the meeting, during the customary disclosure of private talks held with applicants by council members before their vote, Sidhu noted he was in daily contact with the Angels.

The original starting price was also secretly reduced from $325 million to $320 million so the city can hold onto roughly two acres for a water well and a fire station.

The Council majority was fine with taking nearly $170 million off that price: $123 million to subsidize 466 units of affordable housing and $46 million for a seven-acre park.

The seven-acre park is estimated to cost $6.5 million per acre to build, more than six times the per-acre price that Moreno is buying the 150 acres of stadium land for.

“The park is a little peculiar because the park should increase the property value of the other residences they’re going to build,” UC Irvine economist Ami Glazer said in a phone interview.

He said developers, like FivePoint and the Irvine Company company usually build their own parks without taxpayers subsidizing them.

“They build their own parks because it raises their property values. It’s not clear the developer should get compensated on something that will benefit the developer.”

At Tuesday’s meeting, Barnes and Moreno criticized the lack of transparency and said the city is caving to Arte Moreno’s demands.

The two dissenting council members also said the city isn’t getting the proper bang for its buck and is subsidizing amenities for Arte Moreno’s company, SRB Management.

“Why are the Anaheim taxpayers reimbursing $169 million, to the buyer, meaning credits for future affordable housing and parks,? Barnes asked.

“Again, the $169 million is an obligation of the buyer to deliver affordable housing on its ticket and to deliver a community park on its ticket,” Kelley said. “There’s not a reimbursement by the city or its taxpayers.”

Kelley’s defense of the deal confused Barnes, prompting her to ask to consult with the city’s legal team.

“Are you the Angels attorney?” Barnes asked Kelley over the phone.

Barnes and Moreno aren’t the only ones with concerns about the stadium land being undersold.

Former mayor and current Assemblyman Tom Daly (D-Anaheim) sent a letter to the City Council Sunday, warning that the stadium is being sold way under value.

“It is my firm belief — shared by many expert professionals in real estate and city finance — that this deal gives away hundreds of millions of dollars of Anaheim taxpayer money,” Daly wrote.

“For residents outside of Anaheim, this deal looks like a sad joke of self-inflicted bumbling and false choices. It does them no financial harm. But for Anaheim residents — who own the valuable stadium property — this is a massive, historic giveaway costing at least $1,000 for every man, woman and child in the city,” he wrote.

But the Council majority said the stadium property is being sold at fair market value, despite the stadium land never being put on the real estate market.

Sidhu said he and the council majority committed “to our residents that we would only sell the stadium and the land around it for fair market value.”

“You will hear a lot of wild talk this evening. Some here will tell you that land is worth $500 million, $600 million or even more than $1 billion,” Sidhu said. “Anyone telling you that is misleading you and doing so only for narrow political purposes.”

A city appraisal estimated the land to be valued over $500 million, under a certain parking requirement.

Daly, in his letter, urged the city to renegotiate the deal.

“It’s not too late to reconsider the price and terms, and avoid the embarrassment and lawsuits that are sure to follow this one-sided deal. Anaheim residents deserve a better deal, and a fair deal,” Daly wrote.

Anaheim is facing a lawsuit filed by the People’s Homeless Task Force, a resident advocacy group.

The lawsuit is looking to overturn the land sale vote and have Anaheim City Councilmembers redo the entire process in public. A court hearing is scheduled for

Like previous stadium deal announcements, this latest deal was unveiled right around the holiday, this time before Labor Day weekend.

Back in 2013, just before Labor Day weekend, city officials announced a $1 a year stadium lease for the Angels. An ensuing community outrage over the deal ultimately shot down that proposal.

The Council majority defended the land sale Tuesday night. Most of it focused on keeping the Angels in Anaheim and getting the city out of the stadium business.

“There’s criticism rooted in politics and not facts,” O’Neil said. “Those arguments just don’t have any merit.

Councilman Steve Faessel said the deal keeps the Angels in Anaheim and for a fair market value.

“The residents of Anaheim wanted us to keep the Angels and we are with this commitment,” Faessel said. “We wanted significant community benefits, affordable housing, park, good paying construction jobs and we did that.”

Yet none of those things were publicly discussed before or after last December’s initial land sale vote.

Barnes repeatedly reminded her colleagues of numerous emails sent in by residents opposing the deal.

Scores of emails supporting the deal used boilerplate language from the Chamber of Commerce or SRB Management’s website, which was mass-texted to Anaheim residents.