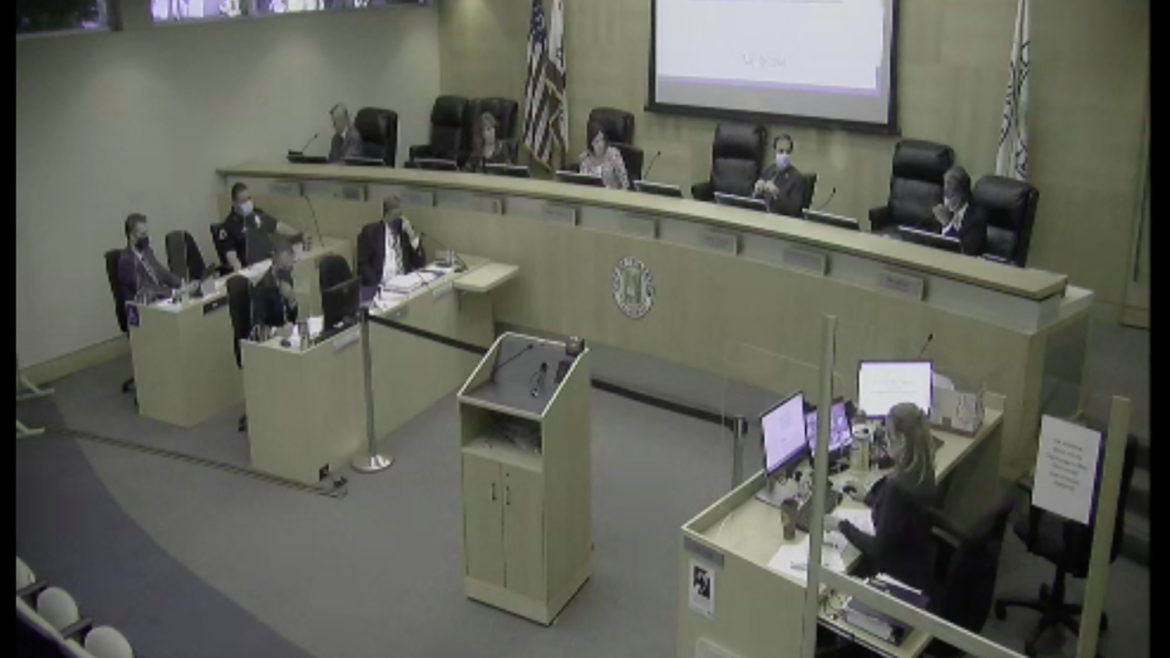 Fullerton city staff laid out a hard truth for the city council last week— even if a proposed tax increase is approved by voters in November, major decisions will need to be made regarding the city’s financial health and focus in the next year.

The answer from city council members so far is to kick tough choices to after the November election.

City Council members voted back in July to place a 1.25% sales tax measure called Measure S on the November ballot. If approved by the voters, it could bring in a projected $25 million a year into city coffers.

If the measure fails, staff publicly said the city would have to cut $5 million a year out of it’s spending budget, warning that the city could still run out of savings by 2025.

That doesn’t mean the city will go bankrupt according to Ellis Chang, Director of Administrative Services, but she said the city could run into “liquidity issues.”

A chart prepared by city staff shows a projection that the city could be $20 million in the red for their general fund without the tax measure by 2027.

Even if the new taxes are approved, City Manager Ken Domer laid out major shifts that would need to be made in the city’s budgeting, including a recommendation to move $6 million towards infrastructure repair every year, and a boost to the city’s savings.

Currently, that fund hovers at around 8-10% of the city’s annual budget. just over one month of coverage. Domer said that the recommended level is closer to 17%, or roughly enough to cover the city for two months.

When publicly asked by Councilman Ahmad Zahra at the Sept. 15 council meeting why their savings weren’t higher, Domer’s answer was short.

“We never had the money.”

The city has struggled financially since the 1980s, in what was described as a “roller-coaster approach to budgeting,” in a staff report prepared for the council’s meeting.

According to that report, the city’s primary struggle is its limited sources of revenue, drawing primarily from sales and property taxes. One of the potential solutions to that problem should the tax measure fail are new property taxes, according to Domer.

Special tax districts could be created in individual neighborhoods to pay for infrastructure repairs, a long running complaint in Fullerton as residents have offered to start paying to fix the roads themselves according to city staff.

Other Orange County cities have used similar taxes for years, but city spending has led to major transparency concerns in some cases.

The city of Irvine uses a similar system to finance the development of the Great Park, but a Voice of OC investigation found that while many residents knew about the additional taxes on their homes, they had no idea that was where their money was headed.

Those special tax districts would also require a bond, meaning the city would have to pay back the money over many years, and could more than double the cost of repairing the infrastructure over that time.

If the city can’t find a solution to bring in more revenue, Domer said further cuts to city staff and programs would be considered. The city laid off 150 part-time employees when the virus hit, and has left several positions vacant as a cost-saving measure, but he said that won’t be enough long term.

Domer’s actions have drawn criticism from the city’s labor representatives.

In a community opinion submitted to Voice of OC, Charles Barkley, the Orange County Employees Association General Manager, called out the city’s cuts, taking issue with Domer’s actions to cut staff with no guarantees that workers could be rehired later.

Mayor Jennifer Fitzgerald and Councilwoman Jan Flory fired back at Barfield in the Voice of OC Op Ed section, saying the cuts were made at the council’s direction and that they were due to the city’s long time financial trouble, not just the pandemic alone.

“There’s going to be a point in time where our expenditures continue to outpace our revenues, and we’re going to be looking at those services,” Domer said, specifically pointing out cuts at the Fullerton Fire Department and further cuts at the parks and recreation department.

However, not everyone on the city council is convinced new taxes are the answer to the city’s problem.

After city staff’s update, Councilman Bruce Whitaker spoke out against the new tax, calling the presentation a “campaign event,” that failed to focus on the real issue-the city’s spending.

“This as a study session was really much more something trying to sell the sales tax,” Whitaker said. “Everyone did some fine work here on it, but what I saw was a litany about chasing more revenue.”

Whitaker also blamed past actions of the city council for their current budget problems, and said that the approval of the tax measure would be another step away from financial stability.

The rest of the council turned on Whitaker after those comments, asking when he had presented an alternative option for them to consider.

“Our revenues in this city have been extremely stagnant for many many years,” Flory said. “You blame the council for its votes in the past, but the fact of the matter is you never prepared another path for us to follow.”

The major budget decisions will all be left until after the election, when at least two new members will join the council, as both Flory and Fitzgerald are not seeking an additional term.