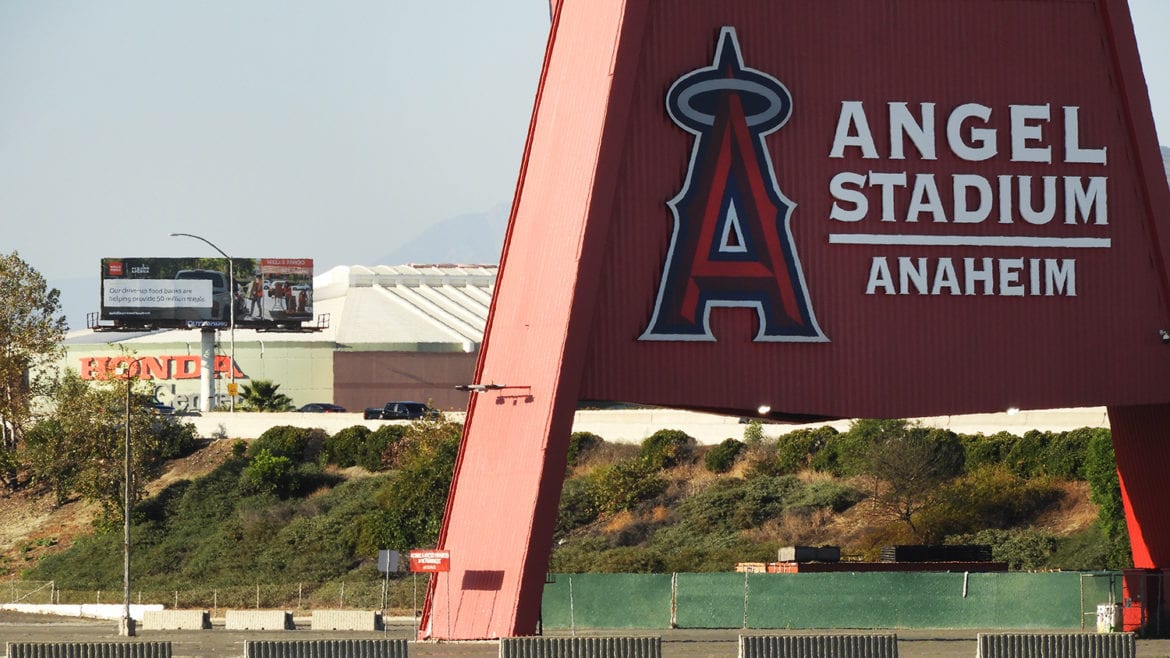 With the LA Angels in the midst of trying to convince Anaheim taxpayers to partner on the land sale around Angel Stadium, one of the biggest public land sales in recent Orange County history, the actual stadium site itself has been mostly left dark during the Coronavirus crisis.

Meanwhile, across the street, the Honda Center has been transformed into a hub of community service.

The Honda Center has held various food and medical supply drives during the pandemic as the coronavirus has rampaged through parts of Central and West Anaheim.

Less than half a mile away, Angel Stadium has been largely inactive since the coronavirus pandemic began. Instead of hosting charity drives and giveaways, the parking lot is filled with rental cars because the local tourism economy is dead.

The city is in the process of selling the publicly owned Angel Stadium and the 153 acres it sits on to a newly minted development group headed by Angels owner for a starting price of $320 million, which could be lowered by nearly $200 million for a total price.

The original starting price was $325 million, but it was secretly adjusted to $320 million because the city will keep 2.5 acres for a water well and future fire station, according to a Friday memo from the city manager’s office to the City Council.

According to a Friday City Council memo, $123.6 million will be shaved off for at least 466 affordable housing units, while $46.2 million will be taken off the price for a seven-acre park.

The final price tag for Angel Stadium and the roughly 150 acres could be just over $150 million.

A special Planning Commissions has been scheduled for Wednesday to advance development plans, which the City Council will take up at some point.

In contrast, when the Ducks negotiated their lease in 2018, they committed to building 20 acres of subsidy-free public park space and took over the transportation hub across the street, ARTIC, and its annual deficit. Although there were questions over if the 16 acres the city sold the Ducks was at fair market value.

While the Angels, through their charitable foundation, have contributed to food distribution and the community nonprofit Anaheim Community Foundation, the Ducks have effectively transformed the Honda Center into a hub of community service.

Voice of OC reached out to both teams, which engaged, to get a sense of their charitable givebacks as well as how the coronavirus has re-shaped their venues’ footprint in the community. Neither team agreed to make their owners available for an interview.

The food drives were able to distribute two millions pounds of food to Orange County’s neediest residents who were put out of work by the pandemic’s economic fallout.

Drive-through voting is also expected to happen this November at the Honda Center.

The Ducks are owned by Henry and Susan Samueli, who also donated large sums of cash to other charitable causes like the Children’s Hospital of Orange County, according to the Ducks Foundation 2017 charitable tax forms, the latest available. The two live in South Orange County.

The Angels’ charitable organization, the Angels Baseball Foundation, donated some money to the local Boys and Girls club, the YMCA and nearly $900,000 to a cancer research institute in Los Angeles, according to the Internal Revenue Service 2018 charitable tax return forms.

The Angels are owned by Arte Moreno, who’s ownership group in the process of buying Angel Stadium and the roughly 153 acres it sits on for a starting price of $32o million. Moreno lives in Arizona.

The stadium price tag will ultimately be lowered when the city negotiates a community benefits package, which could include affordable housing or a park.

Samueli secured a 25-year Honda Center lease in November 2018 after actively negotiating with the city for over a year. The deal included giving the city more money in ticket sales and Samueli took over ARTIC, the train station across the street from the center, and its $2.5 million operating deficit. The city also sold Samueli 16 acres of land for $10 million as part of the deal.

Around the same time the Honda Center deal was being finalized after more than a year of negotiations in November 2018, Moreno pulled out of the original Angel Stadium lease and threatened to move the team out of Anaheim.

In January 2019, Mayor Harry Sidhu brought back what he called a “one-year extension to the current Angels lease to the end of 2020,” which turned out to be a lease reinstatement.

Sidhu said he met with Moreno — apparently without speaking to his Council colleagues about it — and brought the lease reinstatement to buy more time to negotiate a new deal for Angel Stadium.

The City Council voted on the $325 million Angel Stadium land sale at a special meeting Dec. 20, during the start of the holiday season and right before the year-end deadline.

The vote was also nine months before council members knew that price could be more than cut in half to $150 million.

The Honda Center deal didn’t subsidize any community benefits, like the Angels deal is looking to do.

While some City Council members were questioning where the city was at with the Angels community benefits package, the Honda Center was holding weekly food drives from March to June.

Yet the Planning Commission’s nearly 2,800 page staff report, released the Friday before Labor Day, doesn’t easily lay out the nearly $170 million price deduction for the park and affordable housing or the potential $150 million final price tag.

Instead, it’s buried in the disposition and development agreement about 100 pages into the staff report.

Meanwhile, Samueli’s incoming development around the Honda Center, called OC Vibe, will have roughly 20 acres of park space spread throughout five different parks, according to a city document outlining the development.

The park space wasn’t subsidized by shaving off money for roughly 16 acres of city land the Samueli’s bought for $10.1 million, which has parking requirements on it.

“This city-owned land to be sold at fair market value as determined by an MAI appraisal ordered by the City (total of $10,100,000); the appraisal is based on the value of the land as encumbered by the Parking, Loading Dock and Equipment Easements,” reads the November 2018 staff report.

Although, it’s unclear if the land sold is fair market value because the 16 acres were never put on the real estate market — just like Angel Stadium.