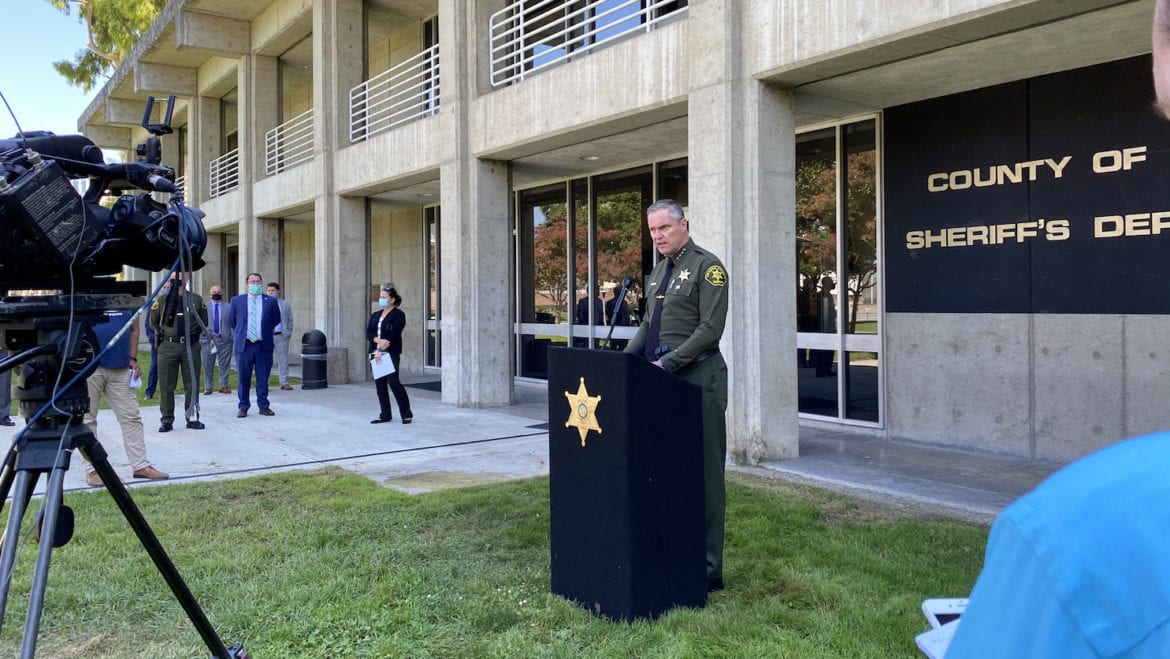 Orange County Sheriff Don Barnes at a Sept. 24, 2020 news conference in response to one of his deputies' killing of a homeless Black man in San Clemente.

One day after a deputy shot and killed a homeless Black man in San Clemente, Orange County Sheriff Don Barnes faced public scrutiny over officer accountability and expressed a need to reassess his department’s role in mental health and homeless outreach.

Meanwhile, officials in San Clemente at a Thursday emergency meeting declared a 9 p.m. civil unrest curfew in specific areas of the city and boarded up the City Hall meeting chambers.

Protests had already popped up in San Clemente Thursday morning while others planned for later in the day were then discouraged by some organizers for fear of clashes between protesters and counter protesters.

All of it comes after two deputies on Wednesday — part of the department’s homeless outreach team — initiated an encounter that culminated in the killing of the very person they were tasked with helping:

Kurt Andras Reinhold, a 42-year-old Black man who Barnes during a Thursday news conference said had been homeless in the area for some time, was last listed at a known address in Los Angeles County, according to the department.

Officials insist Reinhold tried to grab a deputy’s gun when the afternoon encounter outside San Clemente’s Hotel Miramar turned into an altercation. During the news conference, the department passed out a grainy image captured from surveillance video that Barnes said shows Reinhold reaching for the gun.

While a full investigation has yet to be completed, Barnes said it was one deputy who fired twice at Reinhold, adding both officers have been placed on leave while largely deferring questions about any investigation of the shooting to the Orange County District Attorney’s office, which will probe the incident.

“The District Attorney’s investigation is to determine whether there is any criminal culpability on the part of the law enforcement officers involved in an officer-involved shooting or custodial death,” said DA spokeswoman Kimberly Edds in a Thursday statement.

Barnes declined to get specific as to why the deputies approached Reinhold beyond stating the Homeless Outreach Team’s goals, and also said his department won’t release the surveillance video of the incident until full interviews of all witnesses have been conducted.

The shooting happened the same day that grand jurors in Kentucky opted not to level direct charges on police officers who shot and killed Breonna Taylor, a Black woman and emergency medical worker, in her own home on March 13 — a decision sparking protests and unrest across the U.S that day.

Earlier over the summer, the Minneapolis police killing of George Floyd, a Black man, prompted a spate of unprecedented protests across Orange County’s streets. 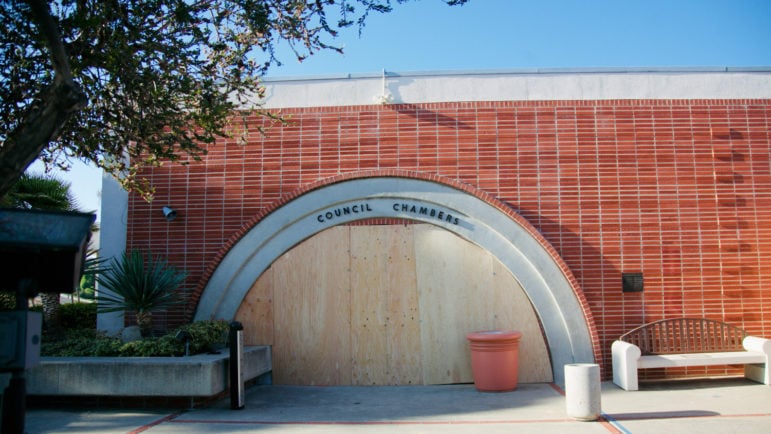 The San Clemente City Council chambers boarded up on Sept. 24, 2020, after officials called for a civil unrest curfew in response to public outcry over the OC Sheriff deputy killing of Kurt Andras Reinhold, a 42-year-old Black man.

Barnes in an earlier statement said that given the current national climate, he understands the protests but asked people to reserve judgement until more information became clear.

Yet activists and sheriff critics were already questioning why the homeless outreach efforts led to a physical struggle, let alone Reinhold’s death.

“The way we over police houselessness needs to stop,” said Zoe-Raven Wianecki, an organizer with the OC Protests social media activism venue.

Protests were already underway Thursday morning. That led to five arrests — four for blocking traffic and resisting officers’ orders and one for the vandalism of a patrol car, according to Sheriff Sgt. Dennis Breckner. 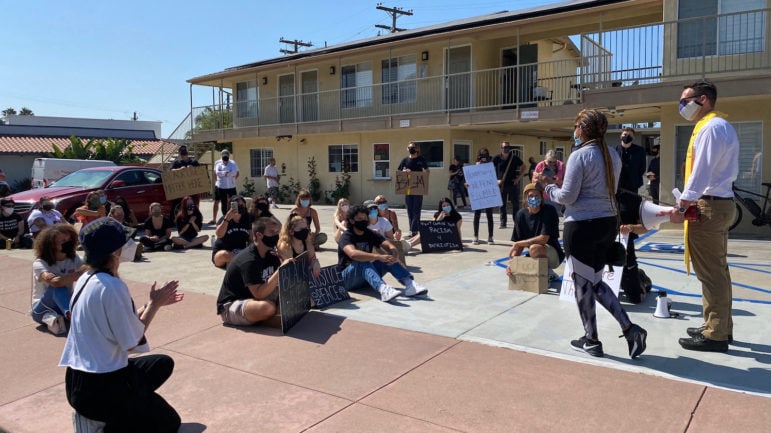 Protesters organize in San Clemente around 10 a.m. on Sept. 24, 2020, in response to an Orange County Sheriff’s Deputy killing of a homeless Black man.

Another demonstration was planned for late Thursday afternoon outside the Sheriff’s San Clemente station, but Wianecki said it was later called off over fears that white supremacists and counter protesters would show up.

“We’re mainly discouraging it to try to look out for the safety of Black and Brown bodies,” she said, pointing to the arrests made earlier in the day and describing unsavory interactions between protesters and bystanders.

Wianecki said she and other organizers regrouped in Santa Ana to try to bail out protesters arrested Thursday morning.

Asked by a Voice of OC reporter about the department’s role in mental health and homeless outreach, and whether Wednesday’s shooting now puts that into question, Barnes said it’s always been in question:

“Prior to this event we were already evaluating not just the role, but the manner, in which  (homeless and mental health services) are provided,” he said, later adding “We’re planning to have dialogue on what we can build out as far as … psychiatric emergency response teams, mental health response teams … in a way that will be able to intervene early enough that will prevent .a mental health crisis that requires a law enforcement response.”

“Those are easy to talk about philosophically,” he said, but added “It’s a funding issue.”

“We don’t want to be mental health clinicians, it’s not our goal for law enforcement to deal with mental health issues, they manifest into violations of the law that oftentimes requires a response,” he said, continuing: “My goal is to deal with these issues through other avenues that don’t require a police response.”

Activists and political groups like the Democratic Party of Orange County (DPOC) have since come out with statements denouncing the shooting.

“Yesterday’s tragic murder of Kurt Andres Reinhold at the hands of Sheriff’s Deputies fills me with sadness and outrage. My heart goes out to Kurt Reinhold, his family, and to all Orange County communities impacted by this violence,” said DPOC Chair Ada Briceño in a Thursday statement.

“I urge the Orange County District Attorney’s office and Orange County Sheriff’s Department to provide complete transparency: Release all available video, including surveillance footage,” she added in the statement. “It is disturbing that the public is forced to get basic facts about this violent incident from bystander videos on social media, instead of our taxpayer-funded law enforcement officers.”

To young progressive organizers like Chispa director Hairo Cortes, “This is why defunding the police is imperative to save lives,” he wrote on Twitter.

Asked about calls to defund the police, Barnes appeared to voice agreement with elements of that argument at least somewhat — saying he sees it more as a call to properly allocate resources to the right areas:

Over the last decade, the Orange County Board of Supervisors shifted millions in public dollars away from public health agencies and services while doubling the sheriff’s spending budget.

Haley Slovenec is a Voice of OC youth media contributor.