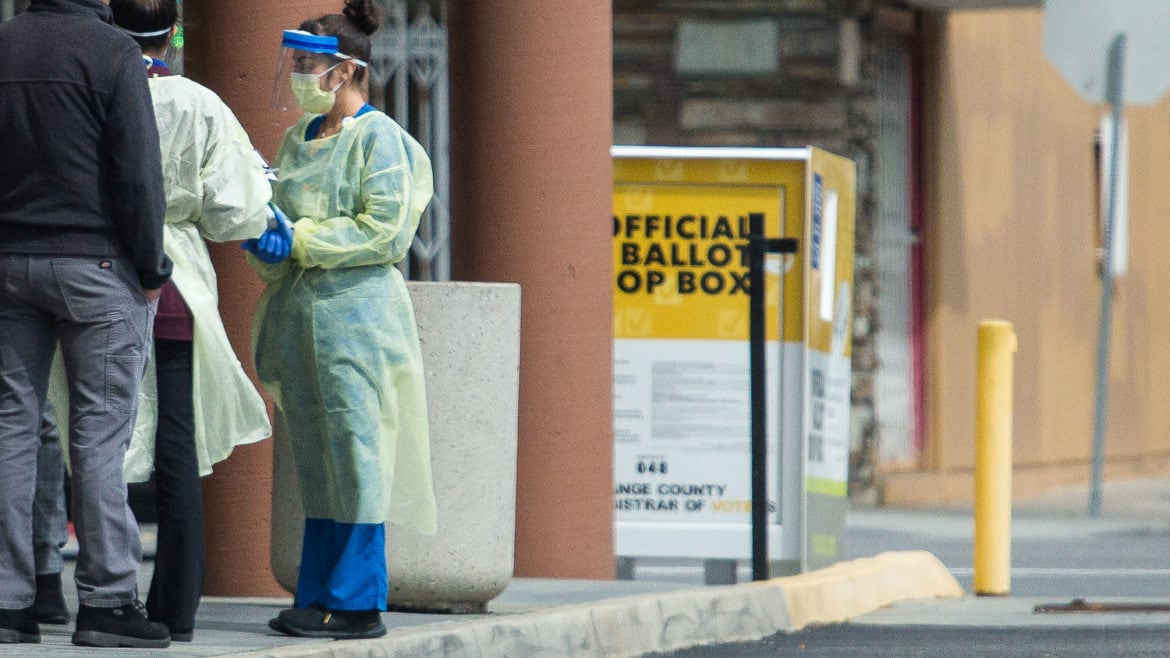 Alta Med patients get their temperature checked March 18, 2020, before they enter the building in front of a ballot drop box placed by the Orange County Registrar of Voters.

Election security is generating enormous interest, whether it’s hacking attempts by foreign governments or questions about whether mail-in voting is secure.

As Orange County voters gear up for the November election, Voice of OC has been putting questions directly to the man in charge of making sure the election is secure and accurate: Neal Kelley, the county’s registrar of voters.

In a recent interview, Kelley – who serves on the U.S. Department of Homeland Security’s Election Security Task Force – said cyber scams are attempted on election systems on a daily basis, prompting a major beefing up of local computer security, including installing intrusion detection devices.

Kelley said he “absolutely” feels comfortable with where Orange County is at when it comes to preventing hacking of election systems, but that it’s a daily effort.

“There are scams being attempted on our system on a daily basis. So it just will not go away. It’s going to be ongoing,” Kelley said.

“We continue to work very closely with our law enforcement partners,” Kelley said, adding that security protections on the county election office’s computer network have roughly doubled since 2016.

As far as mail-in voting, Kelley has said it remains more secure than in-person voting, due to signature verification and other protective measures. Kelley said he’s preparing for the vast majority of OC voters – upward of 95% – to cast ballots by mail in the upcoming election.

In anticipation of possible delays in postal delivery, the California Legislature extended the deadline for ballots to be received by the county to 17 days after Election Day, as long as ballots are postmarked by Nov. 3.

The voting process in Orange County will be largely similar to the March primary, Kelley said, including every registered voter being mailed a ballot and having multiple options for casting it: by mail, dropping it off at a vote center or ballot drop box, or voting in person at a vote center.

The main differences, he said, will be new safety measures at in-person voting centers like one-time use pens, physical distancing, open front doors and hand sanitizer.

Here are Kelley’s answers to a second round of questions about voting in Orange County as the November election approaches:

There’s been a lot of concerns around mail-in ballots and whether they’re vulnerable to fraud. You’ve talked about signature matching and other processes in place to protect against fraud. But what do you say to concerns about fraud with mail-in ballots and ballot harvesting? Are they valid? And what procedures and safeguards are in place?

I think some of this stuff has become politicized. The reality is a voter can maintain custody of that ballot if they’re concerned about it. I don’t want to discount the concerns. But what I would say to them is look, that ballot is going to be delivered to you, vote it at home, hold on to it, and then you have your choice. You have options to deliver it directly to us at a vote center, or directly to a drop box. So if you have concerns about it going through the postal system, the options are there. Which is great, because some places around the country don’t have those options.

We’ve done some field research on this recently, and we’re planning our outreach efforts and planning our messaging around that. And we’ve kind of heard pretty clearly through the field research that these concerns are out there. So that messaging seems to resonate much better with voters, which is: The ballot’s going to come to you, you can maintain custody of it, and you have the options on returning it.

So what you’re saying is voters can make sure it gets into the hands of the registrar?

For in-person vote centers, how many of them will be open and where? Is there a map of them? Will there be the same number of vote centers as the March primary?

It’s going to be a little lower than the March primary, because we’re not doing the full 11 days [of early in-person voting]. There will be 167 [vote centers] throughout the county. Still a large number of vote centers, almost what we did in March. I don’t have a map yet because we just got guidance [when] the governor signed the bill last week [on Aug. 6] on what the in-person piece looks like for COVID. So we’re scrambling right now to finalize and get all of our vote centers in place. I’m guessing probably by mid-September we’ll have the locations completely finalized.

So there will be a map published probably in mid-September?

Yep. Just like you saw in the March primary.

In the March primary, we saw a lot of long lines on Election Day at some vote centers. In some cases, it went a couple of hours past the scheduled closing of polls. Do you anticipate anything like that this time? And is there anything being done to help with that?

When you look at the data, and we heat-mapped that data, [it was] pretty much around the universities and colleges where those situations occurred. And what we’re seeing now is that most of those organizations are going to be having distance learning in fall, so we’re not going to have the kind of large number of students on campus who might wait until the last minute. But one of the things that we’re continuing to educate people on is to get out there, do it early, you have those options.

So from your vantage point, you’re not seeing a huge risk of a similar repeat of a crush of long lines of voters?

I mean, any time you have a large volume of people, it’s supply and demand. If they’re all waiting til the last minute, that’s a problem. But I don’t see that as being an issue, because we’re now going to be in the second election with vote centers. People are going to start getting used to this concept of, every voter gets a ballot, you have options, you don’t have to wait until the last minute. And so I think we’re going to definitely see a reduction in that.

I will tell you that, though, on Election Day in a presidential election, there’s always wait times. It’s a natural thing of people waiting until the last minute to go cast a ballot in person.

Although I still think, because of COVID, [in-person voting] is going to be reduced. We clearly saw that in both special elections we had in April and May. That was pretty clear.

The county’s gearing up for budget cuts from losing tax revenue during the pandemic. Do any of those cuts affect the election at all, or the registrar’s office?

I couldn’t comment on future cuts. I can tell you in terms of election for the fall, we are set. Because our budget was locked, and we were able to tap into some of the CARES Act funding for the election itself. So from the standpoint of appropriations for us, we’re good through the election for sure.

In the last few years there’s been warnings from the FBI and the Department of Homeland Security to state and local election offices about hacking attempts by foreign governments, including into voter registration systems. A lot of this was in other states, but there were some warnings to California too. What kinds of hacking warnings have there been for Orange County in this election, and what do you say in general to concerns about potential hacking of election systems?

We continue to work very closely with our law enforcement partners. We have a very good program in place with [the U.S. Department of Homeland Security] and the FBI, as well as [the Orange County Intelligence Assessment Center (OCIAC)] which is our law enforcement fusion center. They work closely with us on our election security, leading up to the election. I will tell you that since 2016 the security on our network platform, I would say has doubled. It’s night and day from what it was in 2016. And we have intrusion detection devices and things we did not have on there in 2016, that feed directly into Homeland Security.

And then I will tell you that phishing attempts have been on the rise across the country at election offices. That’s grown. And then of course we get the warnings you described. That’s just ongoing. I mean, the thing I like to say about COVID is hopefully someday that goes away, right? We get a vaccine…But this issue, foreign governments trying to hack in, or attempts by bad actors looking for vulnerabilities, is not going to stop. That’s going to be ongoing. So that just has to be a constant focus on the security piece of it.

I still serve on the national task force on election security, with Homeland Security. So fortunately for Orange County, we’re dialed in when it comes to being right at the top of these issues. I feel really good about that.

Do you feel comfortable with where Orange County is at right now, when it comes to protecting against hacking?

Absolutely – but it’s a daily thing. I mean, there are scams being attempted on our system on a daily basis. So it just will not go away. It’s going to be ongoing.

In the big picture, what’s your bottom line for voters this election amid the pandemic and concerns about election integrity? What’s your main message to them?

I really want to tell them that we’ve done a tremendous amount of work to ensure their ballot is secure in this county. And if they have concerns, the good thing is we built an infrastructure that allows them to have lots of options. I will tell you that their fellow citizens around California don’t have all the same options that they do here in Orange County. So I think that’s a plus, and that’s a good thing for our voters.