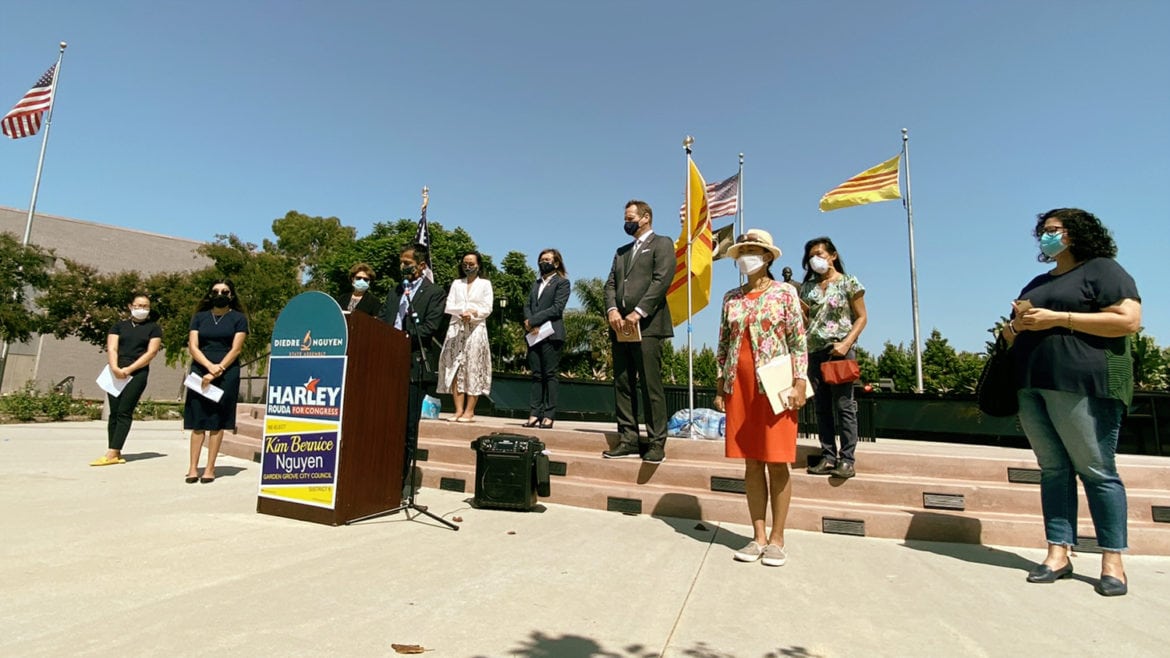 The resharing of a Facebook post by Democratic Party of Orange County (DPOC) vice chair Jeff LeTourneau -- praising Ho Chi Minh -- was deleted off Facebook 90 minutes after he reposted it Monday.

An Orange County Democratic Party leader’s sharing of a Facebook post praising Vietnamese Communist leader Ho Chi Minh has sent Little Saigon into uproar and drawn staunch objections from local politicians both on the left and right — all of it just months away from an election where Democrats are hoping to win or keep seats in that area.

It’s only the latest incident where public statements revolving around the Vietnam War and ideas about communism have sent this area of Orange County, which spans Westminster, Garden Grove, and parts of Santa Ana and Fountain Valley, into a political frenzy.

The resharing of a Facebook post by Democratic Party of Orange County (DPOC) vice chair Jeff LeTourneau — praising the dead communist leader as someone who “liberated an entire poor, colonized nation from 2 of the most powerful military forces in the world” — was deleted off Facebook 90 minutes after he reposted it Monday.

But by then, his post had already been screenshotted and shared on social media, with local Republicans and Democrats reacting.

Nguyen, who wasn’t available to speak with Voice of OC, in the same post then challenged her Democratic opponent for the 72nd State Assembly District seat, Diedre Nguyen, “to reject the Orange County Democratic Party’s endorsement and money if this is what they stand for.”

Indeed, Diedre Nguyen was among a group of local Democrats like Congressman Harley Rouda and county Democratic Party Chair Ada Briceño who appeared at Westminster’s Freedom Park, a Vietnam War memorial, to denounce LeTourneau’s remarks in a Tuesday news conference.

Many of those speakers were running for reelection in offices representing parts of Little Saigon, and the event culminated in a spectacle of them chanting “Freedom and Democracy for Vietnam” in unison in front of 20 or so members of the community and Vietnamese media.

“Let me be very clear … We condemn any communist propaganda and any communist sympathizers .. as Democrats, we fight for every human right, for democracy in Vietnam,” Diedre Nguyen said.

Ho Chi Minh, who died around six years before the Fall of Saigon in 1975 that marked victory for his north Vietnamese party in the war, has come to symbolize despotism for many of the thousands of south Vietnamese who fled the country fearing reprisal after the war. Saigon was later renamed after him.

LeTourneau over the phone Tuesday said his resharing of the remarks were meant to appreciate how Ho Chi Minh “was able to get his country free from colonialism and military occupation” despite his stature and lack of wealth. 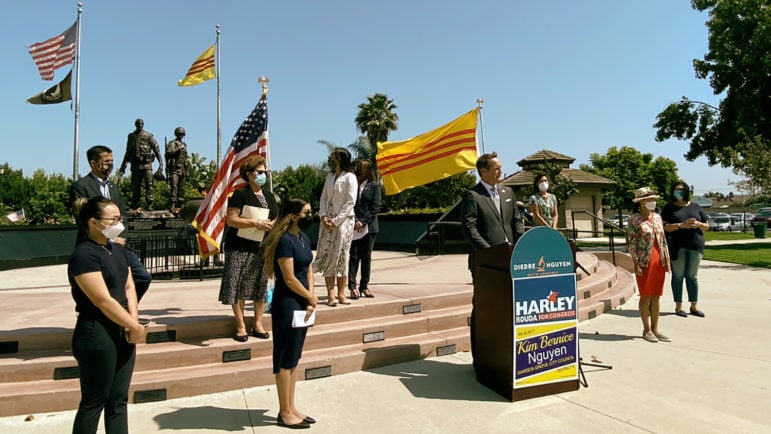 Still, LeTourneau issued an apology statement on Tuesday, saying “These memories of atrocities and pain come fresh to mind, and I want to let the Vietnamese community (know) that I’m not insensitive to their pain. I pledge to learn and be better. As an LGBTQ+ activist of over forty years, I recognize the power that words have on people.”

Garden Grove Councilwoman Kim Nguyen on Tuesday described Ho Chi Minh as a man who “rings synonymous with Hitler, Stalin, Mussolini or Castro for many in the Vietnamese community.”

“My father, like so many others, left everything and everyone behind. Although many have created wonderful lives for themselves and their families in the U.S., the impacts of the war and their journey to freedom is forever ingrained in their minds and hearts,” she said.

Nguyen went on to say the effects of the war go beyond just those who escaped Vietnam — “The lasting effects can be seen in the intergenerational trauma we see today and the Vietnamese American community as a whole. My heart aches for those who will be triggered by this.”

She, along with Briceño and Rouda, called on LeTourneau to resign.

“Praise for a despot like Ho Chi Minh coming from a Democratic leader is inexcusable — Asian Americans are the fastest growing electoral bloc and Vietnamese Americans are voting Blue at a greater rate in each election,” Nguyen said. “A vice chair who doesn’t listen to our Vietnamese community cannot possibly lead our party or unify our community in orange county.”

Briceño at the news conference said the party has called for a special meeting to discuss LeTourneau’s standing as vice chair, for Wednesday at 2 p.m.

LeTourneau said he sees no valid grounds for his removal as vice chair.

“As to whether or not I’ll resign, I’m still working on it and talking to people important to me, including my husband,” he said. “The fact that I have profusely apologized … and for a post that was up no more than 90 minutes that was immediately removed, I don’t know what my resignation would do other than give political cover and distance people from my remarks.”

There are questions now as to whether this will impact Democrats’ prospects heading into the election, now just months away, where they’ll face competition with Republicans for state Assembly, congressional, county level, and city council seats spanning Little Saigon.

The race for the 72nd State Assembly District — the incumbent of that seat, Tyler Diep, getting primaried in March — is between Republican Janet Nguyen and Democrat Diedre Nguyen.

Politically, “it was a stupid move for a Democratic leader, to say something so offbeat,” said Van Tran, a former Republican State Assemblyman and longtime Little Saigon political figure.

“But individually, on the candidate side, I think the Democrats can also use this opportunity to speak up and also stake out their position clearly on what they think about the statement by the vice chairman of their party,” he added.

Briceño at Tuesday’s news conference distanced her party from LeTourneau’s actions, saying “Many Democrats across Orange County have denounced this statement, and candidates and elected officials like the ones you see in back of us.”

It’s not the first time an incident like this has sparked uproar in Little Saigon.

In 1987, the editor of a prominent Vietnamese American publication died in what police said was an intentional house fire in the Garden Grove section of Little Saigon.

Vietnamese journalists told the Los Angeles Times that year the editor — Hoai Diep Tu — was possibly killed by anti-Communists upset at him for running an advertisement for an allegedly pro-Communist business.

In 1999, a Westminster video store prompted large protests in the city after hanging a photo of Ho Chi Minh and a Communist Vietnamese flag. A judge that year ruled in favor of Truong Van Tran, the store owner, on the basis of 1st Amendment free speech, according to the Times.

Supporters of Do called the post “sarcasm.” He wrote it after a June 12 council meeting ended with the adoption of a policy that bars any council member from placing an item on a future public meeting agenda without the approval of three council members.

And in September, the Westminster council majority passed a resolution that alleged foreign interference in city politics by the Vietnamese government — a move pushed by Mayor Tri Ta, under threat of a recall at the time, which critics decried as labeling his political opponents “communists” in an attempt to turn Little Saigon against them. 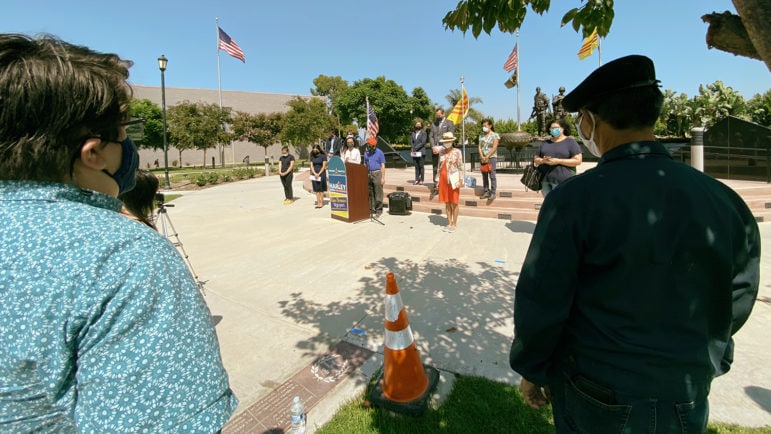 Members of the community and Vietnamese media look on as local Democrats decry LeTourneau’s remarks.

Other community leaders like Tracy La, executive director of the progressive Vietnamese immigrant advocacy group VietRISE, said it’s “clear that neither the Republican Party nor the Democratic Party as it currently stands today in OC understand the nuances of our history and our experiences, and they continue to simplify us in a pro or anti-communist dichotomy.”

“Our elected leaders need to stop using our trauma and the history of violence that we still face today as a result of the war merely as simplified political chess pieces to win their elections or to harm each other’s parties,” she said over the phone Tuesday.

She added that “if congressional representatives and local elected officials really cared about the Vietnamese community,” they should be equally loud about enacting things like rent control in their communities, and “ensure that working families and small businesses are protected during this unprecedented health crisis,” among other things.

It remains to be seen “whether the voters will lump the Democratic candidates in with their party,” Tran said of LeTourneau’s statement. “So it would really be on the candidates themselves to stake out a position on what they think about this.”

Those candidates have until Nov. 3.