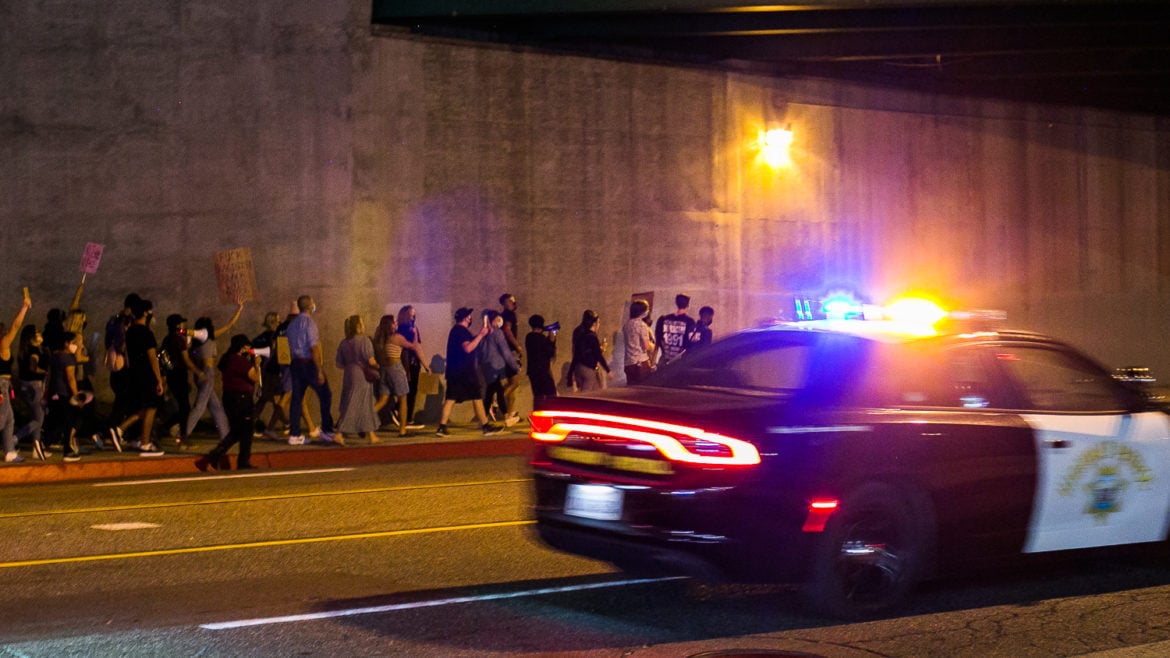 Protesters march through a tunnel in San Clemente on Sept. 24, after an Orange County Sheriff's deputy shot and killed a Black homeless man in the city.

Weeks after announcing its first set of investigations into local law enforcement in years, Orange County’s police watchdog agency announced it also plans to probe the recent killing of a homeless Black man in south county by a Sheriff’s deputy.

The Sept. 23 death of 42-year-old Kurt Andras Reinhold — who was shot and killed following an altercation with two members of the Sheriff’s homeless outreach team outside the Hotel Miramar in San Clemente — is currently being investigated by the Orange County District Attorney’s office, which handles investigations into shootings and use of force by county law enforcement.

The Sheriff’s Dept. is also conducting its own internal, administrative review.

The county watchdog agency, known officially as the Office of Independent Review (OIR), is currently monitoring those other investigations and will start its own into the incident when “that criminal fact-gathering (by the other agencies) is complete and a decision to charge or not to charge has been made by the District Attorney,” said OIR’s executive director Sergio Perez to Voice of OC on Monday.

The OIR doesn’t file criminal charges after conducting oversight investigations like the one it plans for the San Clemente incident, but makes a set of recommendations in a public findings report.

The Sheriff’s department maintains Reinhold during the altercation reached for a deputy’s gun, which officials say is evidenced by surveillance video of the incident.

The department hasn’t released the video and won’t until full interviews of all witnesses have been conducted, said Sheriff Don Barnes in a news conference the day after the shooting. Though news outlets that same day later aired it.

Barnes also said questions around why the deputies approached Reinhold that day are pending the investigations.

“We are fully supportive of what the OIR is set in place for and we have been extraordinarily transparent up to this point and plan to continue to be,” said Sheriff spokeswoman Carrie Braun on Monday.

With multiple probes into the incident already happening in tandem, Perez said his office currently aims to be an “extra set of eyes” while monitoring them to ensure “those investigations are being conducted in an objective manner.”

OIR will move in to assess the incident and feel out for its own findings only after those investigations are complete and District Attorney charging decisions are made, Perez said.

During OIR’s own investigation, Perez said his office will request information from the District Attorney’s office and Sheriff and “review things like interview transcripts conducted of witnesses and people involved … any information that is gathered through those investigations.”

The OIR’s announcement comes weeks after an Aug. 27 report by his office, which had already announced three investigations centered on law enforcement use-of-force policies and practices, evidence-booking issues, and employee hiring and psychological evaluation practices at the Sheriff’s Dept. and District Attorney’s office.

Those three investigations will also focus on the county’s Probation Dept. and Public Defender’s Office.

It was the first set of probes the OIR, which sat vacant since 2018 until Perez was appointed to the office, has announced in years. During that time the office was a one-man shop, but Perez has since hired another staffer, he said on Sept. 25.

Jack Morse, an attorney who worked at the U.S. Dept. of Justice for 10 years overseeing misconduct in law enforcement agencies, prisons and other institutions, began his role as OIR’s investigations manager on Sept. 25.

DA spokeswoman Kimberly Edds in a statement last week said her office’s investigation into the San Clemente incident will determine whether there is any criminal culpability on the part of the law enforcement officers.

Barnes since the incident has acknowledged its timing and national backdrop. The killing happened the same day Kentucky grand jurors opted not to level direct charges on the police officers who shot and killed Breonna Taylor, a Black woman and medical worker, in her own home.

Over the summer, Orange County saw an unprecedented wave of social justice protests against police violence toward people of color in the U.S. following the Minneapolis police killing of George Floyd.

Still, Barnes has asked critics, protesters, and members of the public in uproar over the incident to reserve full judgement until a full investigation has been completed.

During his remarks he also requested any protests around the incident to happen “in compliance with the law.”

“We will protect the First Amendment rights of those who want to publicly mourn Mr. Reinhold,” Barnes said in an earlier written statement posted to social media. “What the community should not tolerate is commentary or action that serves to divide, create mistrust or cause harm.”

Protests sprung up that day in San Clemente in both the morning and late evening. In the morning, five arrests were made — four for “disturbing the peace” and one for vandalism. In the evening, a march from City Hall to the Hotel Miramar went by peacefully, despite some tense confrontations and heckling by passing cars.

On Saturday, Sept. 26, what appeared to be an unrelated protest organized by Caravan 4 Justice in Yorba Linda was met with a counter protest — one marked by physical fights, pepper spraying, dispersal orders, and an incident where a car struck and injured two people.

That protest, like many others that have appeared in Orange County streets and parks since May, was a demonstration against racism.

Two arrests were made: one of the driver, 40-year-old Tatiana Turner who the department says was attending and supporting the Caravan 4 Justice protest, and the other of someone who Sheriff officials say refused to disperse.

Turner, of Long Beach, has been charged with attempted murder and assault with a deadly weapon.

“It’s always a tragedy when something like this (the San Clemente shooting) happens, especially given the backdrop of continuing conversations in this state and county about race, law enforcement and use of force,” Perez said on Sept. 25.

He added: “Now this has happened … our investigation will seek to assess whether that use of force was lawful or appropriate and necessary, and that those investigations (by the DA and Sheriff) are conducted in a good way.”