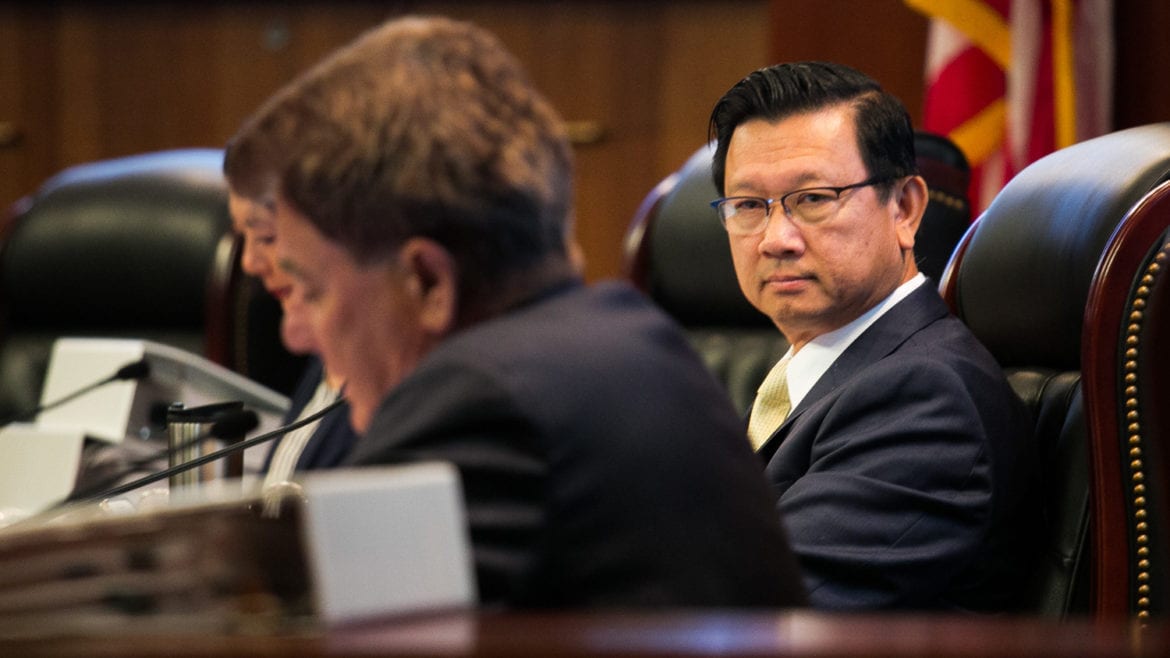 Orange County Supervisor Andrew Do at the Sept. 24, 2019 supervisors meeting.

OC Supervisor Andrew Do has faced a litany of questions in recent years about whether he’s been illegally living outside the central-county district he represents.

Now, in the heat of his re-election bid, it’s coming up again.

A new complaint to the state Attorney General claims Do has been living at a home he and his wife own in the 3rd District, despite serving as the 1st District’s elected supervisor and stating in election paperwork that he lives at a smaller home in the 1st District.

Voice of OC reviewed a copy of the complaint, which was filed by a resident who wanted to keep their name secret, citing a fear of retaliation by Do and his supporters.

“It seems to be one of the worst-kept secrets among people that know or [work] with Supervisor Do, including his fellow supervisors,” the complaint states.

“Do and his wife, OC Superior Court Judge Cheri T. Pham, live together in another larger and nicer single-family residency they own [in North Tustin], which is not located within the First District boundaries, but the Third District [which] already has an elected Supervisor in Donald P. Wagner.”

A separate state law says county supervisors automatically lose their seat if they live outside their district at any point in their term.

Attorney General officials declined to comment on the complaint, which requests a criminal investigation of Do.

“To protect its integrity, we can’t comment on a potential or ongoing investigation,” said a statement from the press office of Attorney General Xavier Becerra.

California residents can get a discount on their property taxes if they attest to a home being their primary residence, in what’s known as a homeowners’ exemption. Neither the North Tustin nor Westsminster homes owned by Do were claimed as anyone’s primary residence for a homeowner’s exemption as of 2015, after Do was first elected as 1st District supervisor, according to a DA investigation at the time.

Among the supporting evidence in the recent complaint are property records showing Do and his wife own both the North Tustin and Westminster homes, and the Facebook page of one of Do’s daughters saying she’s “From North Tustin” and went to a high school in Tustin Unified School District.

The complaint also cited allegations that a resident was visited by the Sheriff’s Department’s judicial protection unit within 48 hours of driving by the North Tustin home last year and taking photos of someone who appeared to be Do’s wife.

“What happened next is really disturbing,” the complaint alleges.

“Within 48 hours of that drive by, the concerned [resident] was contacted multiple times by phone by an OC Deputy Sheriff (all went to voice mail) and then that OC Deputy Sheriff showed up unannounced to their home and left a business card stating ‘Please give me a call’ (with ‘Judicial Protection Unit’ scribbled out, but still barely legible) at their door,” it continued.

“Eventually the [resident] spoke to said Deputy by phone and after the Deputy asked the person as to why they were driving by [the North Tustin address] and quickly determined that the [resident] was not a person that was looking to do any physical harm or whatever to the judge that lived there, he quickly pivoted to elected politics and inquired as to whether the [resident] was considering running for OC Supervisor in the First District in 2020? Say what?”

A Sheriff’s Department spokeswoman said officials did investigate after a family member of Judge Pham’s saw a suspicious vehicle near the North Tustin home in December 2019.

“Yes, we investigated a suspicious vehicle in the neighborhood seen by a member of the judge’s family. Investigators determined there was no threat to the judicial officer or her family,” said Carrie Braun, the department’s spokeswoman. Security for the OC Superior Court is provided by the Sheriff’s Department through a contract.

Braun said she could not say which family member saw the vehicle, and whether the investigator later asked the person who drove by if they were considering running for supervisor.

The complaint notes the OC sheriff’s deputies’ union has been Do’s largest campaign supporter in the 2020 elections, spending nearly $500,000 on ads promoting him before the March primary.

The sheriff’s deputies union declined to comment on the complaint through its communications director, Alexa Pratt.

It’s impossible to verify where Do has been registered to vote, a type of record that usually is accessible to reporters. Do and Pham are confidential voters pursuant to a court order, which makes their registration information secret under state law, according to Orange County election officials. Their confidential status is due to their positions as a former prosecutor and current judge, respectively.

Candidates also usually have to list their residence address on official election paperwork, though judicial candidates are not required to state their residency address, and Pham did not list an address in her most recent candidacy paperwork.

Do listed residency addresses in his candidacy paperwork in recent years, but they are blacked out in the records released to Voice of OC. That’s due to the state law on confidential voters like Do, according to election officials.

Do was cleared by the DA’s office of similar residency fraud claims in 2015 under former DA Tony Rackauckas, in an investigation that did not involve observing who was coming and going from the homes, according to the DA’s description of its probe.

That approach stood in contrast with how the DA’s office probed residency fraud claims against Roman Reyna, a Santa Ana councilman who was placed under surveillance in early 2019, which gathered evidence that ultimately led him to being prosecuted and pleading guilty to election fraud.

“We know the current DA’s office utilized electronic surveillance for a similar complaint of felony residence fraud for then Santa Ana City Councilman Roman Reyna,” states the recent complaint to the attorney general.

Do’s largest campaign supporter for re-election is the union representing DA investigators and sheriff’s deputies, while Reyna was opposed by his city’s police union.

A DA spokeswoman declined to comment on whether there’s any truth to the claims that Do has been living outside the 1st District while serving as its supervisor, and why Reyna was put under surveillance while Do apparently was not, according to public records.

“We are not going to comment on our investigative techniques,” said DA spokeswoman Kimberly Edds.

The recent AG complaint says it was filed by a 1st District resident who asked to remain anonymous for fear of retaliation, citing Do’s endorsement from the union representing OC sheriff’s deputies and DA investigators.