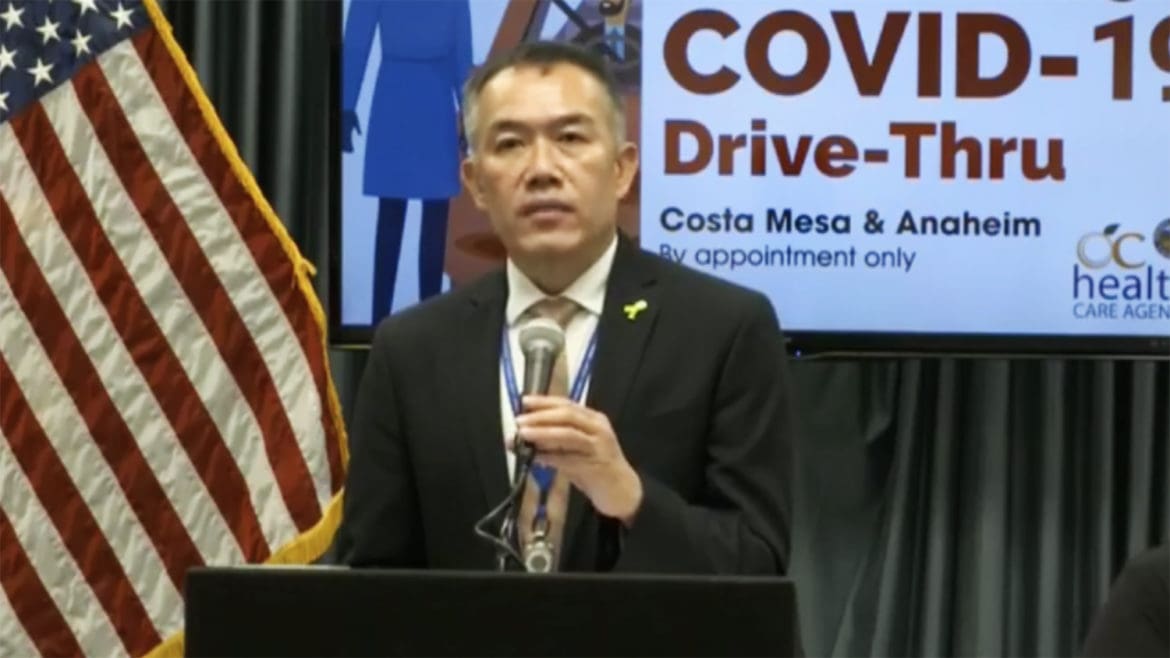 Since Clayton Chau was first appointed as public health director for Orange County, there have been swirling questions about whether he’s qualified to be the top medical doctor protecting the health of the county’s 3 million residents during the coronavirus pandemic.

Chau is overseeing the county’s billion-dollar Health Care Agency while also taking on the job duties of county health officer.

Chau has drawn attention for pulling back the local mask order that his predecessor Dr. Nichole Quick put in place. Chau, who says he co-owned two Rockin’ Crawfish restaurants until 2012 or 2013, also has taken a more relaxed approach to restaurant enforcement than Quick, relying on an attorney opinion that officials are declining to release.

All that attention on Chau recently drew Orange County residents to his resume, with many raising questions on Twitter about the Ph.D degree he lists from an online university that apparently shut down amid accusations of being a fraudulent degree mill.

Voice of OC followed up and confirmed the state of Texas lists the school as a “fraudulent or substandard” institution, and asked Chau about his Ph.D earlier this week during a county news conference.

Dr. Clayton Chau, who is leading OC’s medical response to the coronavirus pandemic, says in his official resume that he earned a Ph.D in clinical psychology from Chelsea University in London in 2004.

The state of Texas has a UK-based university with that name on its list of “fraudulent or substandard” institutions, saying Chelsea University “has never been recognized as a university with UK degree awarding powers.”

And last year, one of Britain’s largest newspapers highlighted Chelsea University as one of hundreds of “bogus institutions flooding the labour market with ‘thousands’ of fake degrees” where students typically “simply buy a degree and do not have to study.”

During a county press call on Tuesday, Chau took questions about it from Voice of OC. He said he took classes online for his degree and didn’t know the school had shut down until years later, while declining an opportunity to elaborate on what the schoolwork entailed.

“I have never practiced as a licensed psychologist. And I believe that I am hired to work in this role as a physician. I’m a licensed physician [in] the state of California. And so, you can check my license with the state medical board. I have never had any problems with my license, with – as a physician. I worked for health plans – two health plans, CalOptima and L.A. Care health plan, as a senior medical director. There was never an issue,” he continued.

A search of the California Medical Board showed Chau has a license to practice medicine.

When asked again on Tuesday what was involved in getting the degree, Chau did not explain what the coursework involved, but said he took classes and paid his dues.

“I did my work and so – but unfortunately that’s what happened to the school. There are other private schools in the U.S. [that] also closed down as well, so I don’t know if that would be the students’ fault, who went to school like that. So I don’t know what else to say.”

In recent days, questions about Chau’s degree were raised on Twitter by the person behind the @inminivanhell account, who says Chau wasn’t qualified for either the health director or health officer positions he now simultaneously holds.

“To my knowledge, Dr Chau is a psychiatrist who lacks public health experience which should not only cause great concern for residents, but it should make us question why,” said the person behind the account, who identified herself for the record as a mom who lives in Mission Viejo.

“Public schools could reopen in two weeks for in-person classes, we need to have trust in our County Health Officer/Director that decisions are being made based off of science, not politics, and definitely not because qualifications and exaggerated degrees were overlooked by elected officials in an effort to have inappropriate control on decision making,” she added.

The user declined to give her name, citing threats she said she has received over her social media posts.

Asked about the Ph.D degree, county CEO Frank Kim said his decision to hire Chau as Health Care Agency director early in the pandemic was centered on Chau’s experience at local health care plans and background with mental health care.

“When I hired Dr. Chau, it was based on his experience at Cal-Optima, LA Care, Providence St. Joseph Health and his experience with behavioral health which has been a big focus for our county,” Kim said in a response via text message.

The United Kingdom’s government website for verifying degrees cited Chelsea University as an example of an institution that awards “fake degree certificates.”

Efforts to find a website and contact info for Chelsea University were unsuccessful, with no website showing up in the first several pages of Google search results.

In Texas, but apparently not California, it’s a crime for someone to claim to have a degree they know is fraudulent or substandard. Texas officials publish an official list of such institutions, which includes a UK-based Chelsea University.

Orange County officials, for the second time in recent days, also declined to answer if county supervisors waived requirements that Chau be board certified in order to appoint him as the county health officer leading much of the pandemic response. In addition, officials so far haven’t released documents about Chau’s hiring or his contract.

While Chau has said there were 10 “really outstanding candidates” for the health officer position, county officials have declined a public records request to see the documents related to his recruitment, including others interviewed for the position.

Kim also avoided questions about relaxing requirements for public health at the county’s weekly news conference on Thursday, and Chau didn’t answer when asked again about it at Tuesday’s news conference.

As director of the Health Care Agency, Chau oversees a billion dollar division in charge of pandemic response in the county as well as a host of programs like mental health services.

County health officers typically are a separate position, and under state law are responsible for at least 171 different duties, with broad authority to prevent the spread of diseases. Among their powers is the ability to issue orders, including requiring isolation and quarantine.

In 2014, Chau agreed to pay a $2,000 fine to state authorities for failing to disclose $12,000 in drug company speaking fees he received while leading mental health and addiction programs at CalOptima, county’s health insurance plan for low-income residents.