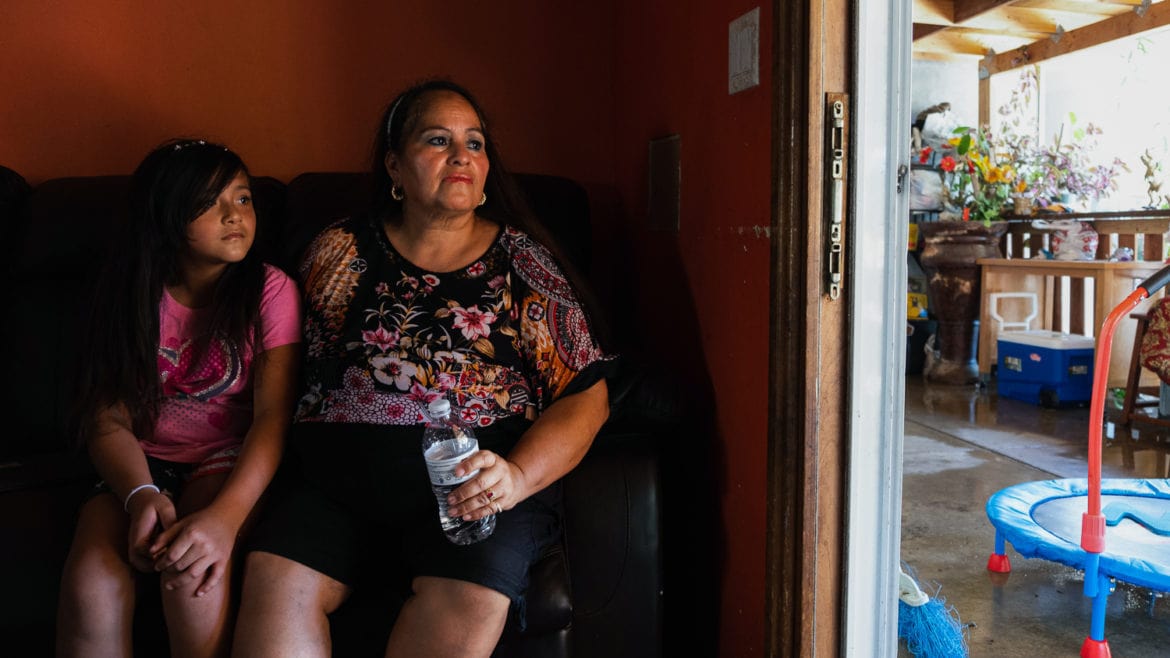 Reyna and Nina Gonzalez sit on the coach overlooking their backyard. Reyna says her kids –all adults now—have helped support her since she’s been out of a job since March 16. This is the first time she’s ever applied for unemployment.

Reyna Gonzalez is out of work and waiting on California’s Democratic Governor Gavin Newsom for help.

Yet so far, the wait is proving to be a long one.

Reyna, who lives in a house in Santa Ana minutes from John Wayne Airport, where she worked as a cook, is one of nearly 50,000 local food service and hospitality workers who have been laid off, according to state figures.

In all, there’s nearly 200,000 people out of work across Orange County.

More just got added to that after Disney announced Tuesday that it’s laying off 28,000 workers across its parks.

Overall, there’s about a 12 percent downturn in jobs from last year, about the same amount of local unemployment during the Great Recession of 2008.

Except, this contraction landed all at once.

And for people like Reyna, it’s landed right on them.

Reyna, 55, said she’s hoping that Gov. Newsom today might sign legislation that would guarantee her job back as a cook at the Anaheim Ducks restaurant at John Wayne Airport once things turn around.

It’s a job she’s cherished for nearly a decade.

But she’s running out of time and options.

Union officials across the state, like UNITE HERE Local 11, argue that workers like Reyna deserve some certainty – especially when companies are getting a host of federal, state and local aid.

California’s Chamber of Commerce has argued the bill is a job killer because it imposes complex mandates on businesses.

Today, Newsom has to make up his mind on whether to sign or veto AB 3216.

Newsom is also under criticism that his Unemployment Department can’t get checks out fast enough.

Reyna isn’t happy about having to file for unemployment at all.

She prefers to work.

“It’s hard. Very hard. I had my security, working 30 years without stopping. This is the first time I ever applied for unemployment. I’ve never lived off of government … always off my own hard work.”

In May, her employer ended her health insurance.

Since then, she’s had to spend $300 a month on trips to Tijuana, where she buys her diabetes medication that used to be covered through her health insurance that was provided by her job.

Growing up on a ranch in her native Michoacán, Mexico among a half dozen brothers, Reyna – now a mom to three boys of her own and a grandmother to five – said she learned to not be afraid of hard work.

She has been working at the airport for 20 years, often leaving her home at 4:30 a.m. to open the restaurant where she starts preparing for the breakfast shift.

“I pay my house, my car, my auto insurance,” Reyna said.

Without her paycheck, she feels like her independence has been compromised.

“I’ve had to hit the food banks, rented out the living room,” Reyna said, adding that her unemployment benefits haven’t been enough.

Her family has banded together to meet the challenge.

“Hopefully, the governor will help us,” she said.

If not, she’ll have to start looking for something else soon.

That’s where Michelle Steel and her colleagues on the Orange County Board of Supervisors could be helpful.

Week after week, Orange County supervisors have watched a huge human drama play out in Anaheim and Santa Ana affecting thousands of families and have rarely asked any questions in public about the human toll, much less come up with any kind of grand plan to help alleviate the impacts of the coronavirus on neighborhoods.

But nothing special for workers.

During this past week’s public coronavirus update on Tuesday, it was pure crickets from supervisors as OC Health Officer Dr. Clayton Chau told them a spike in infections followed a reopening bid after Labor Day.

They didn’t dive into what happened publicly, but it’s clear the spike now will prevent more openings across Orange County.

I think those infected were likely workers even though Chau told me that the county had no real conclusions about why the Labor Day spike occurred or who it impacted.

Yet beyond the obvious health concerns about infections, county supervisors should be asking a host of questions about our fraying safety net.

How are the food banks operating? How are they being adequately financed? Do they have what they need to keep masses from going hungry?

How is the county’s food stamps distribution going?

What’s happening in the Latino neighborhoods most impacted by the virus in Anaheim and Santa Ana?

What are our contact tracing efforts telling us about the spread of virus infections in these working class neighborhoods?

Are there any special temporary job programs that the county government could be funding in these times?

Indeed, it’s been quite the opposite.

The pattern from the supervisors’ dais seems to be a push to reopen alongside an effort to keep infections secret and enforcement light.

In recent weeks, it’s also been noticeable that the County of Orange coronavirus public updates have gotten lighter, shorter.

Press conferences have gone into the basement of sorts, no longer broadcast on Facebook, but only held on private calls with reporters.