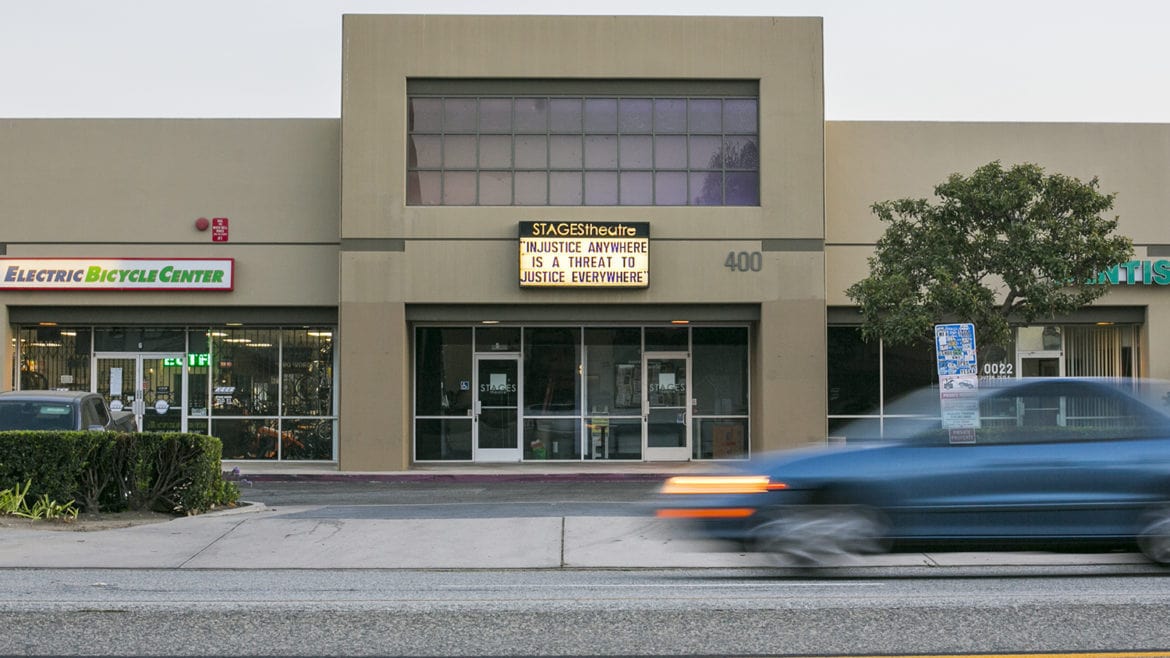 Stages Theatre is giving up its space in a Fullerton strip mall after 21 years. The company, however, does not plan to disband completely. A new performance location will likely be determined after performances can commence again after coronavirus-related restrictions are lifted.

Last week, Amanda DeMaio, the executive director of Stages Theatre, announced that after 28 years, an estimated 400 productions, and countless blood, sweat, beers and tears, the theater company is giving up the Fullerton space which it has occupied since 1999.

This is just a temporary move, DeMaio and others involved in the decision say. Only the theater’s physical space is closing, not the idea that has infused it since its founding in 1993, when it joined the county’s still-embryonic storefront scene, lasting longer than all those that came before (if you don’t count South Coast Repertory) and most that came after.

If that’s the case, this is merely the next chapter in the history of a theater that has gone through many and, like anyone who lives to be 28 in this world and has led a halfway interesting life, it has the scars to show for it.

Stages persevered during its first six years as an underground venue in a grimy industrial park in Anaheim that few of its fellow tenants even knew housed a theater. By day, if company members were building sets, they’d duck for cover anytime anyone who looked remotely like a city official might be passing by. At night, it churned out plays at a dizzying pace, most of them original. 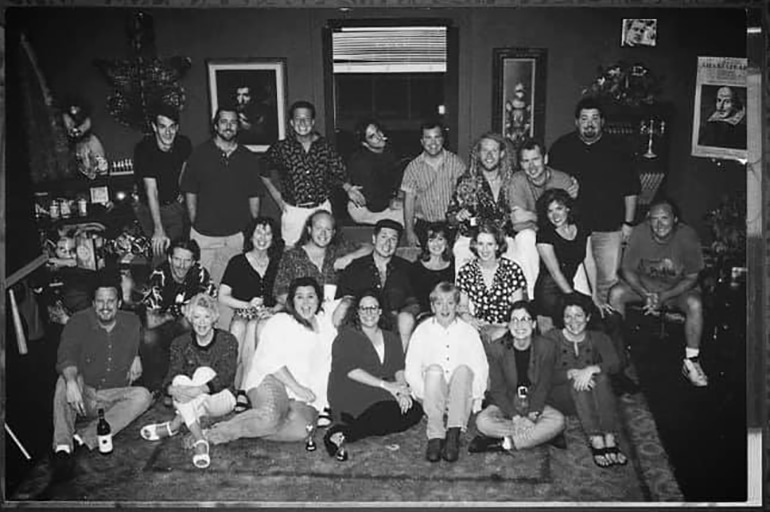 The theater made it through that under-the-radar period, even the night a cadre of gun-toting Anaheim cops rolled up on some cast members while they were hanging in the alley behind the theater during a scene break. The cops thought the actors’ prop guns were real.

It survived the transition to fully legit status when it moved to Fullerton in 1999 and navigated all the bureaucratic red tape that came with opening a professional space. It weathered its founder, Brian Kojac, stepping down twice.

It lasted through the occasional heckler and tanked audience member puking in the seats, a car smashing through the windows of its lobby, a play called “Pardon My Penis,” and all the outrageous slings, arrows, misfortune and sublime glories that come with creating theater.

‘Time to Regroup and Streamline’

But not even Orange County’s most prolific, longest continually producing theater entity not affiliated with a university or government entity, and not named South Coast Repertory, could survive the coronavirus.

“Rather than pay rent on a building we can’t work in for who knows how long, throw all of our savings out the door, why not take the time to regroup and streamline, to put ourselves in the best possible position to return when this eventually does end,” DeMaio said, of the seven-person board’s decision to leave the theater.

The timing couldn’t be worse. DeMaio, an original Stages member, said that at the beginning of March, the theater was financially stable and there was no indication that it would close within six months.

But that all changed March 19, when Gov. Gavin Newsom issued the statewide stay-at-home order.

Initially, the board thought it would take a few weeks for the virus to peter out and they could reopen in May or June at the latest. But then Memorial Day came, cases spiked and though it tried repeatedly to contact local, state and federal agencies for any guidance on reopening, there was none. 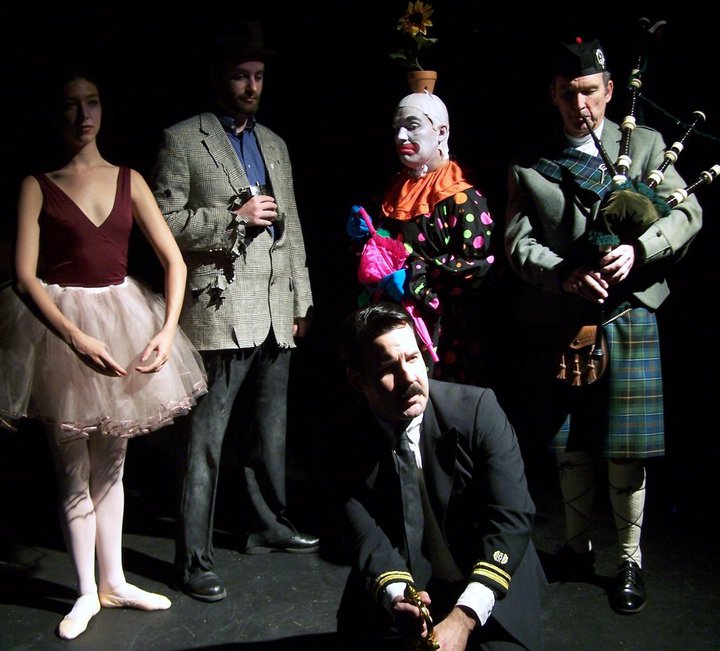 “The Twilight Zone,” produced in 2011 by Stages Theatre.

It was that lack of clarity, that sense of complete uncertainty, that eventually forced the decision, DeMaio said.

“I don’t think it was one big bad piece of news,” she said. “I would say it was one insufficient piece of information after another.”

By early August, when the theater held a garage sale and sold off many of its costumes, it became clear that they would have to leave the theater. “We could have held a couple of fundraisers, but no one knows” when theaters can even think of reopening she said. “Maybe April, I’ve even heard three years.”

Everyone involved with Stages is quick to say the shutdown is temporary. Patti Cumby, the board president and also an original Stages member, said Stages will “absolutely 100 percent return. I think (closing) is for the absolute best. It’s going to give Stages the opportunity to retool and streamline and I think that’s a great opportunity. We’ve been in business for a long time and gone through a lot of different changes, and each of them has helped us progress because of the strong foundation we’ve always had.”

A Smart Decision? Or a Sign of More to Come?

Eric Eberwein, associate artistic director of the new play festival OC-Centric, says he does not doubt that “this is not the last time we hear from Stages. For two reasons. A very solid brain trust that has a great deal of camaraderie, and the audience experience. People loved going there. Actors loved working there. I don’t know too many people who ever had anything remotely negative to say about the place. It was much beloved.”

Theaters have closed in this county and reopened elsewhere, including The Vanguard Theatre Ensemble, the Hunger Artists Theatre Company and Monkey Wrench Theater Collective, which changed its name from Rude Guerilla and moved from Santa Ana to Fullerton in 2010.

But those spaces all eventually closed again, this time for good, and those were much different times. Stages may have made a definite choice of closing now to help ensure it returns in the future. But the fact remains it chose to close. That’s something that many theaters may have seriously discussed but none, except for the Attic Community Theater in June, have done.

And for the handful of theaters that are not partially subsidized by a university or local governmental entity, the same theaters that are the last vestiges of an O.C. storefront theater movement that began around 1990, crested around 2005 and slowly dissipated since, Stages’ announcement is huge. 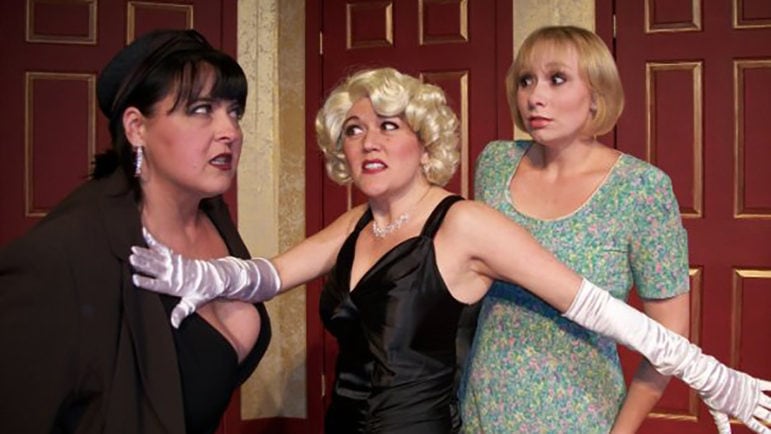 “Rumors” by Neil Simon. Produced in 2000 by Stages Theatre.

“For a company that is so well-respected in our community to be shutting down is the clearest sign that no arts organization is safe right now,” Casey Long and Oanh Nguyen, the managing director and artistic director, respectively, of the Chance Theater, said in a shared email. “It’s just simply not an option to reopen before it’s going to be safe for our artists and audiences, so we’re waiting on guidelines from the CDC and the governor. That being said, the situation is getting leaner and leaner the longer the shutdown continues.”

Michael Serna, the artistic director of the Costa Mesa Playhouse, which is the lone traditional community theater in the county that shares a similar storefront aesthetic as Stages, agrees.

“Unfortunately, I do think (the Attic and Stages) are the first dominoes in what could be more theaters losing their spaces or closing down entirely,” he said. “With no money coming in and no clear date to resume performances, it’s going to be challenging for most theaters to maintain their spaces; even a long-running theater with a strong audience base.”

Half the Chance’s approximately $1 million operating budget comes from grants and some very deep-pocketed private supporters; the Costa Mesa Playhouse’s landlord is a school district. Neither is immune to the reality of no income, but each has some cushion. They should worry, but those theaters that lack one have a right to be worried.

“I was absolutely shocked,” said Nick Charles, who in 2011 launched Stage Door Repertory in Anaheim, when hearing of Stages’ closure. “They had such strong roots and had been around so long, I just assumed they’d be fine.” 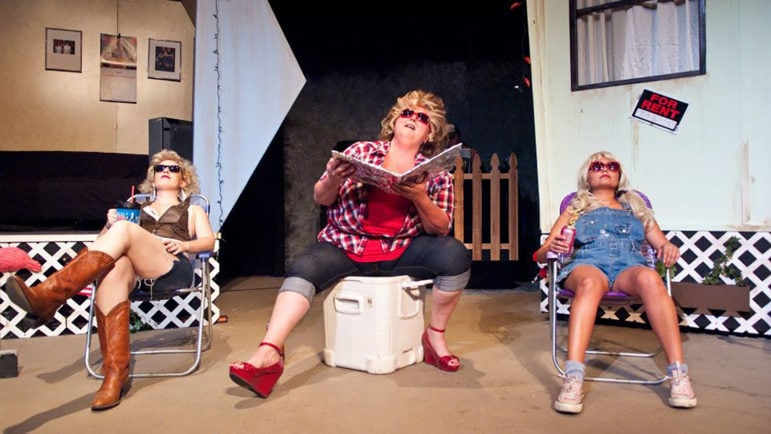 The twin pillars on the storefront theater scene he looked to were Stages and the Maverick Theater, a Fullerton theater that Brian Newell, another founding member of Stages, began in 2002. “I thought as long as they were holding tight, I could see a light at the end of the tunnel. And now one of those pillars isn’t there anymore!”

Charles is confident Stage Door Rep can hold on until January, albeit with substantial debt incurred from not paying rent since March. But he admits his resolve has been weakened by Stages’ announcement.

The Mavericks’ Newell is also confident his theater will pull through thanks to a highly supportive landlord who said, “I’m not going anywhere, and neither is the Maverick,” Newell said.

But that doesn’t lessen the impact of Stages closing.

“I think it’s a heavy blow to the theater community,” Newell said. “I think a lot of people are even more concerned now that Stages has closed.”

Homeless, but Not Defeated

As far as its future, DeMaio says there is nothing definite but “at some point, something will happen,” and theaters will be allowed to reopen. “We will be looking for a place, whether it is our own place or working in another space for a while.”

But she is also realistic.

“A theater isn’t like a lot of other businesses where you rent a space, clean it up and put up some shelves. There are tens of thousands of dollars of retrofitting, not to mention dealing with a city. This is honestly a super hard choice, super emotional. It’s not an easy decision to leave a space, and it won’t be an easy decision to get back into one.”

Wade Williamson, who led the Vanguard when it took a two-year hiatus before reforming in Fullerton in 2004, knows what it’s like to close and reopen a theater.

“Whatever the reason to close, if the people involved still have the passion to continue, then they can come back and be whatever they choose,” Williamson said. 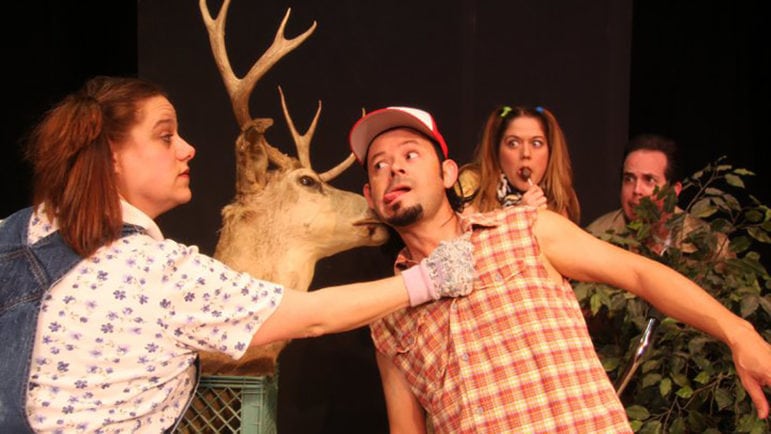 “The Miracles of Mary Mack’s Baby,” an original work by Johnna Adams. Produced in 2010 by Stages Theatre.

All that is known is that the theater that produced more plays, and more original plays, than any theater in this county over the past 30 years, and that worked with the most actors, directors and designers in that time, has no home. Nor do the people who worked there.

“For a lot of artists, it will be the end of a home,” said Jeff Lowe, one of the founders of the Alchemy Theatre, a gypsy troupe that has staged several productions at Stages. “Artists will become less and less inclined to work, sadly, because they’re not getting that sense of community. Many of us will go out and try to find that feeling again, and hopefully, many of us will find it.

“Alchemy is a theater without a home, and now Stages is too. We just have to believe that theater is not a place, it is the spirit to inspire and create.”

Joel Beers is a contributing writer for Arts & Culture at Voice of OC. He can be reached at [email protected].

Disclaimer: Writer Beers is also a playwright and had eight of his plays produced at Stages between 1998-2005.