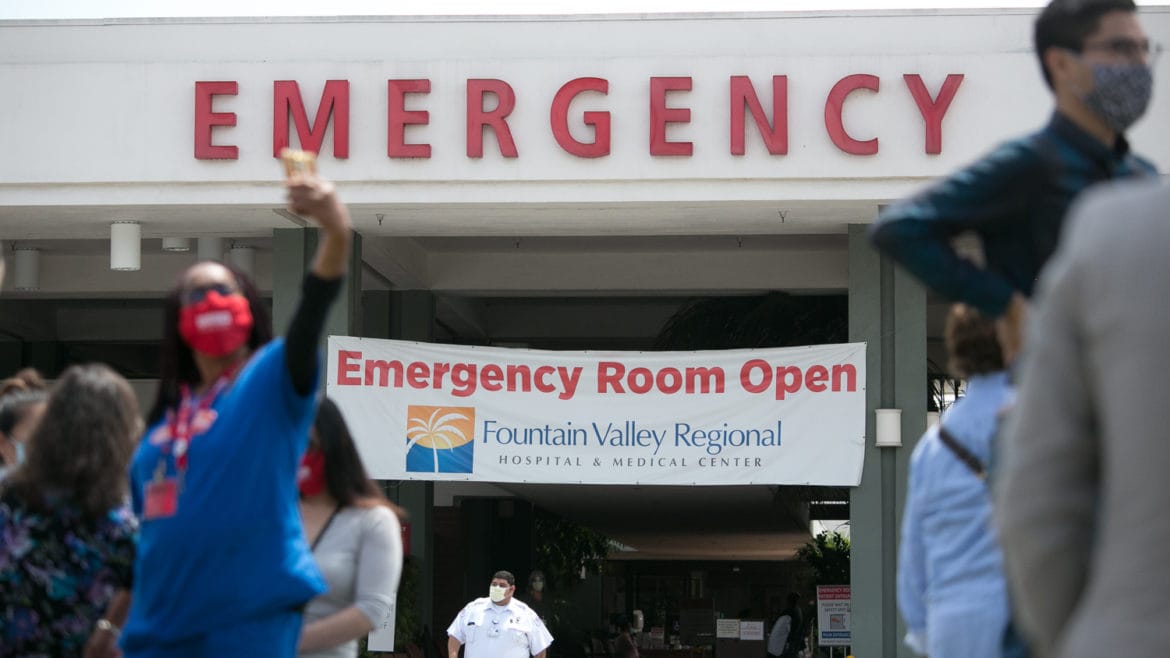 “The [governing body] failed to ensure an effective, active hospital-wide infection control program for prevention, control and investigation of infections and communicable diseases, including COVID-19,” reads the report from the California Department of Public Health.

After this story published, Fountain Valley Regional Hospital officials said they have submitted plans to fix the findings and are waiting on state health officials to sign off on the plans.

“The Plan of Correction was accepted and we await the results of a follow up survey to validate the actions outlined in our Plan of Correction. Fountain Valley Regional Medical Center takes patient safety very seriously and is committed to continuous improvement in quality measures and safety procedures,” reads a statement issued Wednesday evening.

“We continue to follow the guidelines issued by the California Department of Public Health and the Centers for Disease Control and Prevention to protect the health and safety of our patients and staff during this unprecedented pandemic.”

“The hospital failed to assign the dedicated nursing staff to the COVID-19 positive patients that required transmission-based precautions,” investigators found.

National Union of Healthcare Workers spokeswoman Barbara Lewis said the union, which represents a wide range of hospital employees, was having conference calls with hospital management since the pandemic kicked off in March.

But, Lewis said, “they were not responsive to addressing any of the issues.”

“Unfortunately, they made a decision to not work with us and work with their employees and so fortunately the department of public health stepped in and absolutely validated everything that we had said,” Lewis said in a Wednesday phone interview.

The state investigation also found virus patients weren’t isolated to COVID units, but instead were scattered throughout different parts of the hospital.

“The hospital failed to ensure the monitoring of COVID-19 patients room placement to be physically separated from the non-COVID-19 patients and assignment of the dedicated staff as per the hospital’s [policy and procedure],” investigators found.

On July 16, for example, the report says hospital administrators were informed about concerns over COVID-19 positive patient rooms, which “were scattered throughout the units and no dedicated staff only assigned to the COVID-10 positive patients.”

Based on observation, interviews and record reviews, state regulators also said “the hospital failed to provide the dedicated nursing staff to the COVID-19 positive patients that required isolation for [sic] a highly infectious disease. This failure had the potential to spread this infectious disease to other patients and staff.”

When state investigators asked about these conditions during a July 17 telephone interview, the hospital’s Chief Nursing Officer (CNO) said, “Sometimes, it is not possible to do cohorting the patients with this surge.”

Fountain Valley hospital management “identified designated COVID care areas on all levels of care. Each designated COVID area is separated from non-COVID areas by a physical barrier and appropriate signage. The hospital completed these modifications to patient placement on 7/31/2020,” according to the hospital’s response detailed in the investigation.

Deteriorating conditions at the hospital led employees to hold a protest and news conference in front of the hospital July 2.

“I’ve been informed twice that I’ve been exposed to COVID-19,” she said.

National Union of Healthcare Workers spokeswoman Barbara Lewis said shortly after that news conference, two registered nurses tested positive for the virus. She also said one of them had to be admitted to an intensive care unit because the symptoms got so bad.

The union represents a large swath of hospital employees: nursing assistants, medical technicians and other specialty employees like x-ray technicians.

That hospital wasn’t the only one in Orange County with workers ringing serious alarm bells about their facility’s management amid the public health crisis.

Criticisms of hospital administrators also sprang up among healthcare workers in Kindred Hospital’s Westminster and Brea locations back in July and May, respectively.

In May, hospital workers at Kindred’s other location in Brea were organizing for a similar protest against equipment shortages and infections among staff, but at the time canceled that protest after meeting with management and working out new operational plans.

Yet similar outcry erupted at Kindred’s facility In Westminster — after one staffer in Brea, 46-year-old nurse and mother Roda Vicuna, had been on a ventilator and later died.

Workers in Westminster protested what they also said was hospital mismanagement of coronavirus patients, which they tied to an outbreak in health care staff and patients.

Since the pandemic began in March, the virus has killed 1,176 county residents out of 52,538 confirmed cases, including 26 new deaths reported Wednesday, according to the county Health Care Agency.

New deaths can be scattered throughout the past two weeks because of delays in reporting.

Hospitalizations have decreased since Labor Day, with 175 people currently in hospitals, including 51 in intensive care units.

Over 810,000 tests have been conducted throughout Orange County, which is home to roughly 3.2 million people.