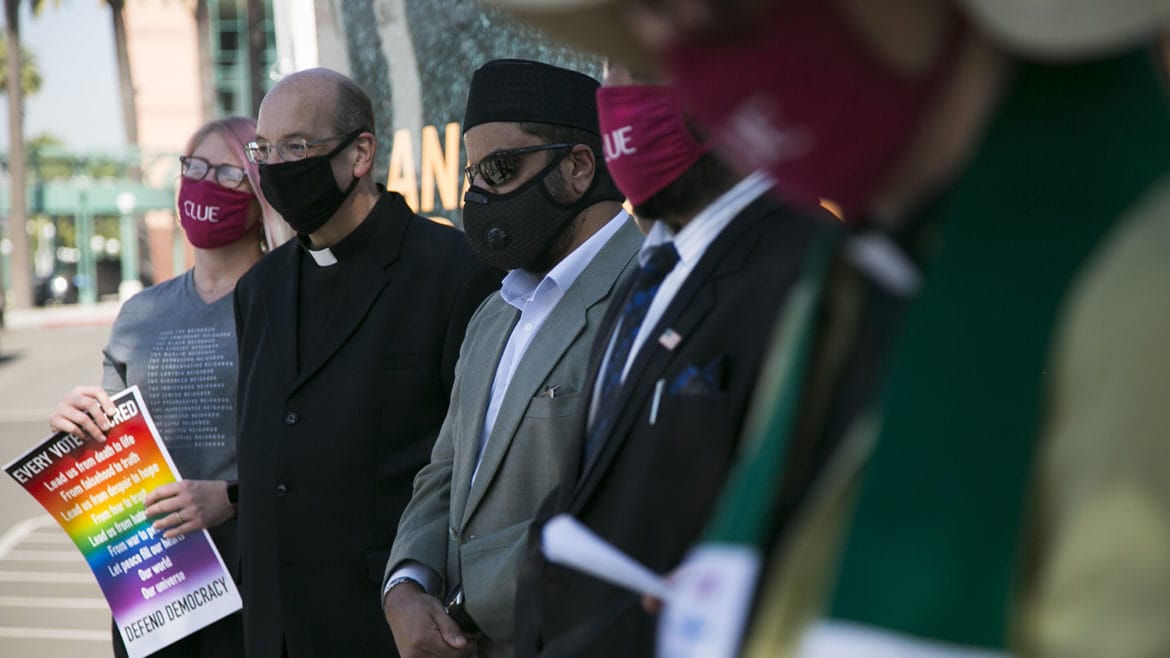 Faith leaders in their ceremonial vestments outside the Honda Center in Anaheim on Oct. 30, 2020. The faith leaders prayed for voters, public officials and encouraged a peaceful democratic process.

An ever-worsening political divide, murmurs of a contested election and fears of violence in response to election day have prompted some nervous religious leaders in Orange County to publicly urge calm and understanding, no matter who becomes president or wins national, state and local offices.

Even if Nov. 3’s outcome — regardless of who emerges victorious — is sure to infuriate many.

With terms like “contested election” and “will there be a civil war” growing in recent days and weeks as Google search trends, religious leaders like Rev. Samuel Pullen of the Community Congregational United Church of Christ in Los Alamitos said it will fall on all faith figures, including himself, to be community bastions of civility and nonviolence.

“The worst thing that we could do, if the results of the election are contested and there is (unrest) across the country, is sit home and watch as more and more conflict is brewing,” Pullen said at a Friday interfaith demonstration in Anaheim. “So we will need that courage … and we will need to be prepared to enter, sometimes, an atmosphere where people engage (in conflict) and be that peaceful presence.”

That call to action, and the question of what role exactly will religious leaders play in the coming weeks to unsow any conflict, is a test for community members like Lillian Chesley, who appeared at the Friday demonstration on behalf of the Mormon Church of Jesus Christ of Latter-day Saints.

Questions of what she’s willing to do to put herself out there and encourage peace “hadn’t occurred to me,” Chesley said after the demonstration, adding she’s wary of putting herself in potentially dangerous situations, especially as Covid-19 is still a problem.

“I certainly want to do what I can, where it’s safe for me to do so.”

Rev. Jason Cook of the Unitarian Universalist Church in Fullerton said he already knows what he and his congregation will do:

“We will show up physically, if there is unrest. We will be there as quickly as we can be, simply to offer people calming in the turmoil.”

Will such calls for unity and peace bear success? Brie Loskota, Executive Director for the Center for Religion and Civic Culture at the University of Southern California (USC), said “our society is thirsty for more leadership, looking for people to exemplify our values, and when any group steps in it has an impact.”

But even with religion’s effect and influence over populations throughout world history, “the hard part is we live in a very fractured society,” Loskota said. “The people who would listen, will listen. The people who never listen, will not.”

She added because these fractures fall along political, moral, religious and racial lines, “it’s very hard to find any unifying figures that anybody or majority will coalesce around.” Add onto that, she said, the fact that not all religious leaders pay attention to or are involved in the civic process. 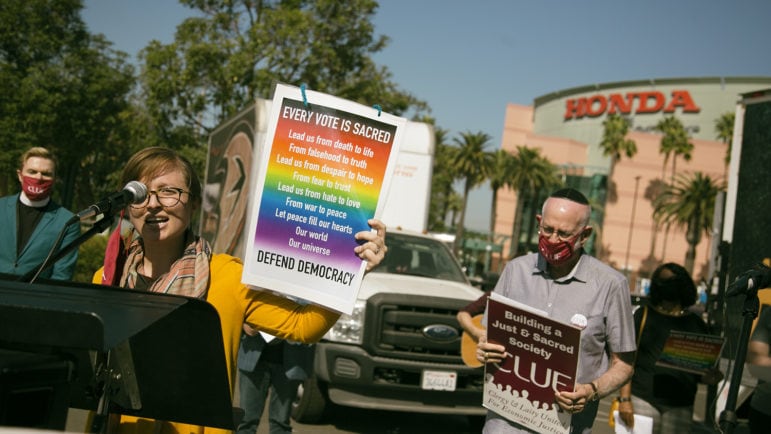 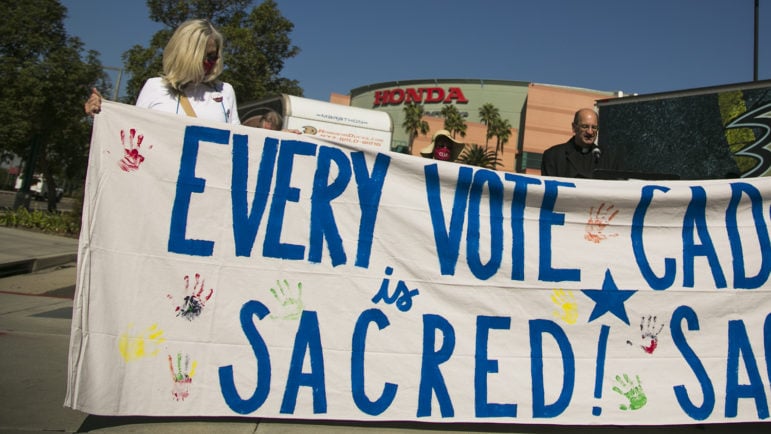 A sign outside the Honda Center on Oct. 30, 2020 reads “Every vote is sacred” in English, and “Cada voto es Sagrado” in Spanish.

Standing alongside Pullen, Cook, and Chesley on Friday was a host of Christian, Catholic, Mormon, Jewish, Muslim and Sikh leaders from all parts of the region, representing different congregations in different areas of the county, outside the Honda Center in Anaheim on Friday.

The facility had just opened up that day as an in-person vote center for county residents to walk in and cast a ballot ahead of election day. It’s also the county’s largest voting location, dubbed a “supersite” by officials.

In front of these religious leaders in Anaheim was a banner, painted on it were the words: “Every Vote is Sacred / Cada Voto es Sagrado.”

“Whatever our politics may be, we all know the sting of losing a family member or a friend because of the divisiveness of politics, said Rev. Sadie Cullumber of the Harbor Christian Church in Newport Beach. “Especially now, in a season of massive change.”

The religious leaders all gave their own blessings on the voting centers and communities across Orange County ahead of Nov. 3, all more or less formatted to each individual’s faith.

Said Akbar Hussaini, executive director of the Newport Mesa Irvine Interfaith Council and representing the Islamic Center of Irvine: “This country belongs to us all, and we will belong to it.”

Pullen toward the end of the service remarked at the different religions represented in front of him. But with that sense of hope came a sober reminder: “Throughout the country, there is not this sense of unity.”

He added: “It will be up to us to be a peaceful presence.”