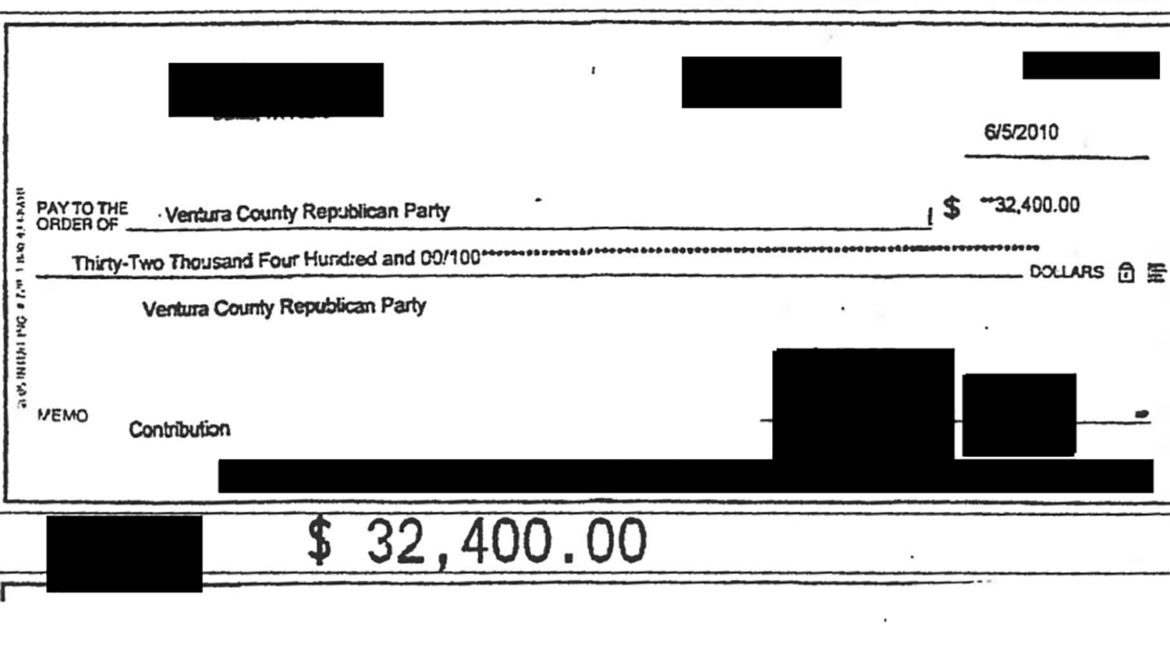 A donation check to the Ventura County Republican Party that a candidate later admitted was laundered through the party to his campaign, in a series of transactions that involved Orange County Supervisor Andrew Do's current chief of staff. Image is from a public report by state investigators.

A new money laundering investigation in Orange County is highlighting a statewide pattern of county political parties acting as money conduits to candidates, in ways that have led to multiple fines for concealing the true source of money and evading contribution limits.

Do has denied the allegations, while declining to answer questions from Voice of OC.

The allegations are similar to a prior money laundering investigation that led to a guilty plea by Do’s campaign treasurer in 2016.

Political parties aren’t subject to the contribution limits that candidates are, and they generally can donate unlimited amounts directly to the campaign of a state candidate. But they can’t be used to launder specific contributions – known as earmarking – while hiding the original source of money.

That’s where county-level parties have gotten in trouble.

In recent years, state authorities have levied over $160,000 in fines for laundering money through a variety of county-level political parties, including in LA and Ventura.

In 2014, the LA County Republican Party faced a $10,000 fine for serving as an intermediary for $32,400 from an oil executive and his family to a state Senate candidate. That same year, two county parties and candidates in the Central Valley were fined $40,000 for serving as conduits of over-the-limit contributions.

“It’s nothing new to try to avoid limits by earmarking money…by laundering it through another committee,” said Jessica Levinson, a professor at Loyola Law School who specializes in election law.

“I think what it comes down to is it’s an illegal end run around limitations. And the limitations are there to prevent actual corruption, the appearance of corruption, and to provide the public with the information about the funds used to support candidates, so that they can make an informed decision,” she added.

“I think it’s a really tempting way for actors to try and essentially wash money through the system and get it to the [candidate] that they really want to support.”

It’s not a subject party officials are eager to talk about. The chairs of Orange County’s Republican and Democratic parties didn’t return phone messages seeking comment, nor did the state-level parties.

A spokesman for California’s enforcement agency for campaign money violations, the Fair Political Practices Commission, declined to comment for this article.

“I think that these issues really should be addressed legislatively a little more clearly,” Ravel said in an interview with Voice of OC this week.

Ray, the treasurer, was among those who agreed to the fine for eight counts of money laundering and false campaign statements in Tony Strickland’s 2010 campaign for state controller.

Do’s chief of staff since early 2017, Chris Wangsaporn, was Strickland’s chief of staff at the time of the laundering and kept Strickland informed of plans to run about $37,000 of the donations from an oil and gas businessman through the Ventura County Republican Party to Strickland’s campaign, according to emails obtained by state investigators.

Both Wangsaporn and Ray declined to cooperate with the state investigation into the laundering and blew off interviews they were subpoenaed to appear at, according to state authorities.

“Strickland, Wangsaporn and Ray did not cooperate with the investigation of this matter,” according to the final investigation report from the California Fair Political Practices Commission.

“Strickland, Wangsaporn and Ray were subpoenaed for interviews with the Enforcement Division on November 19, 2014. None appeared, and their attorney failed to respond to telephone and email inquiries regarding the interviews.”

A Cut for the Party?

Emails obtained by investigators in the Strickland laundering case showed Do’s current chief of staff discussing how the Ventura County Republican Party would keep a 7 percent cut of the laundered money before it was passed to the candidate.

In the Do money transfers currently under investigation, the amount the OC GOP reported transferring to Do’s campaign was almost exactly 7 percent less than the amount donated to the party two weeks earlier from a separate account Do controls that’s not subject to contribution limits.

On Sept. 11, Do’s unlimited account transferred $24,000 to the county party, which then transferred $22,326 to Do’s supervisor account two weeks later – 6.98 percent less than the amount Do transferred to the party.

Supervisor committees are subject to a $2,100 per-donor limit.

Do, Wangsaporn and Orange County Republican Party Chairman Fred Whitaker didn’t return phone messages asking why the amount the party reported giving 7 percent less to Do – the same amount kept by a county party in the prior money laundering case involving Do’s chief of staff.

In emails obtained by investigators, Do’s current chief of staff showed the math at the time to his boss at the time, Strickland.

In a June 2010 email thread, Wangsaporn showed Strickland how $47,400 he was receiving from two donors would end up as a smaller check from the party after “taking out” money for the Ventura County Republican Party’s “7%” as well as a fundraiser’s “15%.”

After removing those amounts, the county party’s chairman “will be cutting you a check for “$37,490,” Wangsaporn wrote in a June 2010 email thread ahead of the general election that year.

The state agency tasked with enforcing campaign money violations is the California Fair Political Practices Commission. It’s faced criticism in the past for taking years to investigate and bring fines, which critics say makes it easier for candidates and groups to break the law. Others have said the commission has been understaffed by being underfunded by the state Legislature, leading to slower investigations.

“I do know that there have been cases since I left the FPPC that have taken an inordinate amount of time to investigate,” said Ravel.

“They’re much better than they used to be,” Grindle said in an interview this week.

“They used to take, you know three, four, five years to get stuff resolved. They have worked at improving that. And the problem is, they’ll never get to the point where they can get it straightened out before an election” she added.

“But that’s pretty much true of just about anybody that monitors campaign law. You just – you can’t get it done. All the hanky-panky occurs just before elections.”