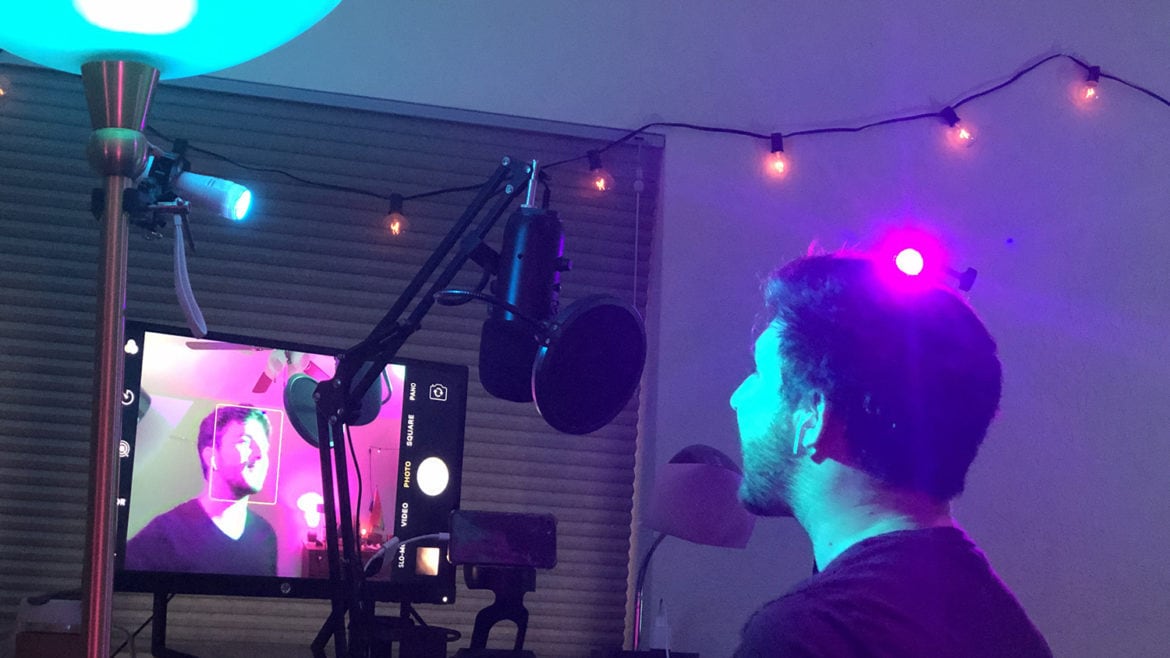 Arts students have been forced to continue their studies online during the coronavirus pandemic. Adam Jacobson, a UCI drama student, has created an in-home studio to capture his performances on camera for class attendance and assignments.

Few businesses have been as directly and instantly demolished by the pandemic as the over $50 billion a year performing arts industry. With social distancing measures placing limits on crowds, theater, live concerts and dance performances have been canceled or postponed. On college campuses, in-person instruction has moved online. Essentially, the performing arts industry is gasping to stay alive.

And though artists have been laser-focused on the immediate logistics of setting up Zoom rehearsals and live-streaming platforms, studios still sit empty, and theaters remain dark. How will the COVID-19 era affect the industry in the years to come?

Many performing arts college students, who are essentially pursuing a degree in something that does not currently exist, are asking this question. In the current climate, an arts education requires a great leap of faith.

Candida Spahr, a senior in the dance program at Cal State Fullerton, has been scouring dance company websites to see if any are holding auditions for the next year.

“It is a little somber because it is very much unknown what post-graduation is going to be,” said Spahr, who is making an effort to use the time at home to prepare her resume and create her audition reel.

“The options (for joining a company) seem minimal compared to before because companies themselves are weaving through the same process, and deciding if they can take on new dancers when they don’t have funding. So, that is very hard. I’m trying to stay positive about it.” 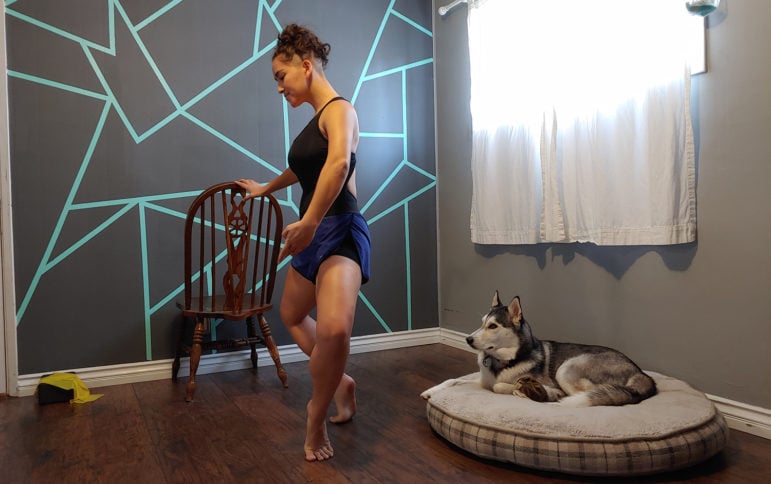 Candida Spahr, a senior dance student at Cal State Fullerton, uses a chair as a ballet barre in her makeshift home dance studio while attending a virtual dance class during the coronavirus pandemic.

When campuses around the country began to shut down in March, the expectation was for panic and despair – of which there was some! – but many arts educators decided to look at this crisis as an opportunity and rose to the occasion with a spirit of innovation.

“For me, what was really important was recognizing that I needed to stop trying to recreate what was happening in the classroom. We’re not in the classroom. You’re on a computer screen. Focus on the educational mission and nail that,” said Michael Nehring from the theater department at Chapman University.

“And the other thing is to be very obvious with the students that we’ve got to work on this together. I am not a master of this. This was nowhere in my 40 years of teaching experience, but as an actor and as a creative person, I’m used to responding quickly when things fall apart. That is what actors do!”

Nehring, who felt he taught one of his best acting fundamentals classes online during quarantine, is going to integrate a week of Zoom lessons into his course moving forward to teach lessons about staying in the frame and finding your light.

“For me, there was a moment when it switched from ‘Oh, we’ll do what we can,’ to ‘Let’s see what we can do,’ and that moved us forward,” said Giulio Ongaro, dean of the College of Performing Arts at Chapman University.

With Chapman University planning to allow graduate students back on campus beginning on Oct. 5, and undergraduate students a couple weeks after that, Ongaro said he is pleased that enrollment numbers of new and returning students are about where they were in past years.

“I don’t worry about motivation so much for the College of the Performing Arts students because they are naturally motivated. You don’t get to the point where you can come here and audition unless you’ve been really motivated leading up to this. The students are chomping at the bit to be here and to learn.”

Arts On The Internet

Most professional arts groups and casts of future performances rely on a steady stream of well-trained graduates of higher education. The faculty at UC Irvine, Chapman and Cal State Fullerton acknowledge this and have used this time to prepare students to enter the professional world, even if that means they enter it digitally.

The acting students at UC Irvine created video audition reels that were sent to hundreds of casting directors as a supplement to their annual in-person industry showcases in Los Angeles and New York. The live performance was missed, but the students actually received more exposure in this format.

Debra Noble, Cal State Fullerton professor and dance program coordinator, has used this remote teaching normative as a loophole to bring more guest choreographers in without the travel or housing expenses. With online learning, students can rehearse with a choreographer in New York and take a class with the Dutch National Ballet on the same day.

“I do feel like the world of dance has gotten bigger for this new generation of dancers. I think I am an optimist, but we’re going to come out of this stronger,” Noble said. “The students are learning all these new ways of sharing their craft and their love of dance. They’re going to come out of here knowing how to do video dance. They’ll know how to teach online and maybe set works on somebody in Europe. There are things that they wouldn’t have had otherwise.”

Now just might be the time the arts needed to reassess the things they have always done, and maybe even stop doing some of them. At UC Irvine’s Claire Trevor School of the Arts, the recital hall that seats 165 people for music performances could, with the right technological improvements, serve an audience of 500, 1000 or more patrons from all over the world via the web.

“What we’ve wanted to do technologically over the next few years, is forced on us by COVID-19 to do it now,” said Stephen Barker, dean of the Claire Trevor School of the Arts. “So we’re using all of our resources to think through ways to make what we were going to be doing over the long term, work for us in the very short term.”

Expedited plans to meet the demand plus not charging for performances in the first quarter have, for UCI and other schools, turned the department’s focus outward to fundraising, development and other advancement work.

“We’re going to take advantage of the limitations and not be gotten down by them,” said Barker, who noted that there have been no withdrawals from the School of the Arts for the coming academic year.

“This time that none of us chose is an opportunity to explore our most innovative and creative ideas. Our vision for the school for the years I have been dean is ‘Reimagining creativity for the 21st century’ and it’s got new meaning right now. This is a 21st century none of us thought we’d be living in.”

A Time to Evolve

“I keep getting these glimmers of hope in the way the faculty are preparing for the virtual learning and our needs as students,” said Adam Jacobson, a junior transfer student starting at UC Irvine who has his sights set on being onstage again next year.

“Every time I think of my personal goals and ask myself ‘Do I want to pursue being an actor?,’ getting back on stage is the main driver for me saying ‘yes.’ So I can hold out for that. I think this is a chrysalis stage for some people.”

Don Hill, chair of UC Irvine’s Department of Drama and professor to Jacobson, echoes that description: “I think we are actually in the cocoon stage of where entertainment is going to go … and I think what we’re going to see is a lot of young people learning to become visual artists in ways they never thought they could.”

Part of Hill’s commitment to the students, as echoed by professors Noble and Nehring, is to meet these emerging artists where they are. On Zoom, back home with their parents maybe, or living with a cat that always finds a way on camera. These educators are finding material that works digitally whether that be radio plays or dances staged for tiny boxes. The connection is not lost, it’s just different.

And when this is all over?