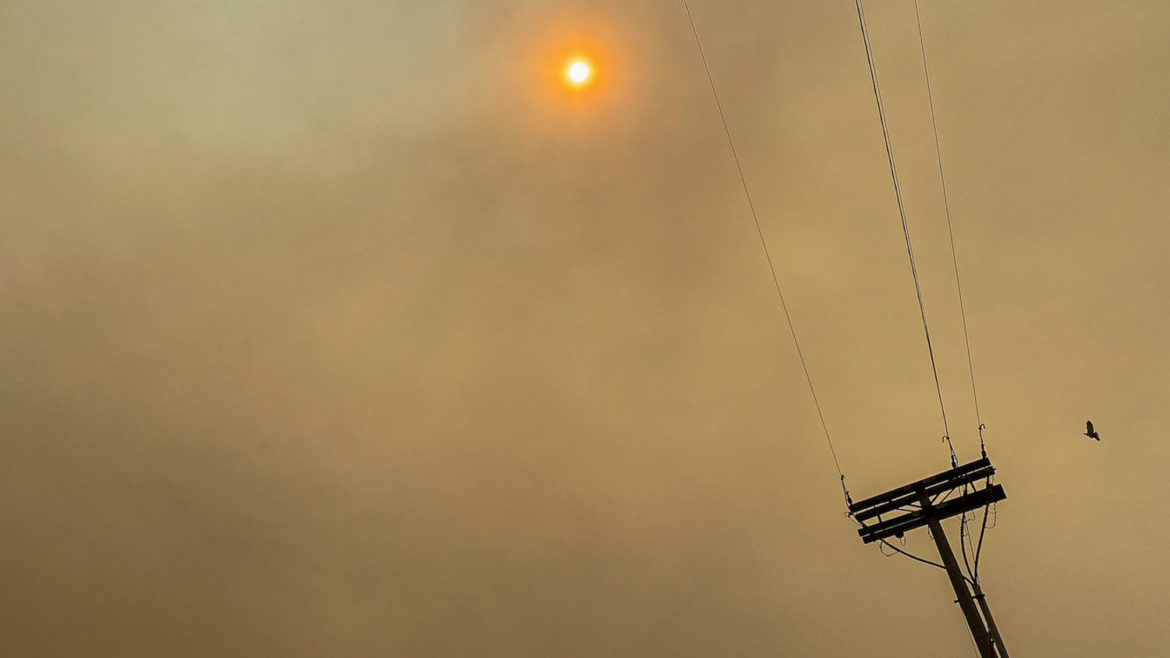 Smoke from the California wildfires subdues the sunlight over San Juan Capistrano on Sept. 19, 2020.

A spate of recent heat waves is prompting some Orange County officials to reexamine the way communities are made aware of — and able to access — public cooling centers, which mostly aid people living without air conditioning and the heat-vulnerable elderly.

Over September and August, periods of extreme temperatures triggered multiple cities, like Anaheim over the Labor Day weekend, to open up such centers for residents to get relief.

As scientists predict climate change will make hot weather seasons increasingly intolerable, officials in Buena Park, for example, are moving forward with efforts to improve people’s ability to access these centers while also grappling with root causes of why these services have, in the past, gone largely unused by the public.

Similar to other cities, Buena Park’s old policies around cooling spots required three days of 100-plus degree temperatures to trigger staff to open the centers, though officials could open them whenever they wanted, at their discretion.

Many of these facilities across the county also double as cities’ community, youth and senior centers, which are air conditioned all day but are officially opened up as public cooling centers when the heat gets excessive.

A social media alert about cooling centers that Buena Park Councilman Connor Traut sent out through his Instagram page on Sept. 30.

Buena Park’s City Council supported lowering the opening thresholds that city staff follow to two consecutive days of 95-degree temperatures, and even lower to one day during periods of rolling blackouts or power outages like the ones triggered by heat waves in mid-August.

And the increased efforts won’t be that costly, staff said. City Manager Aaron France during the Sept. 22 meeting called the fiscal impact of operating these centers more often “minimal.”

Elected officials in Anaheim and Garden Grove late last month told Voice of OC they were also open to the idea of reassessing the thresholds and policies around public cooling center access in their cities.

In Garden Grove, Councilwoman Kim Nguyen said her city’s threshold for triggering cooling center openings is just one day of 95-degree weather, though she pointed out that the baseline may be too high and said any temperature within the 90-degree range could still pose public health risks.

“Seeing how, during the last two years, the heat waves have been on the hotter end to me, I would definitely consider lowering that threshold at least to 90 degrees, so I’m willing to bring that to the City Council post-COVID,” she said.

Anaheim Councilman Jose Moreno said “definitely” when asked late last month whether he would think about reassessing his city’s cooling center threshold policies: “It’s a great question I haven’t really thought about. I’m actually going to ask staff about that.”

But across these three cities lies a common problem.

On Sept. 22, Buena Park staff during the council meeting said public usage of these centers has historically been low and the services underutilized.

Part of that, council members pointed out, could be due to the need for increased public awareness of when the facilities are open. So staff on Tuesday, directed by council members, agreed to increase efforts to alert certain areas of the city about cooling services through the Alert OC notification system.

Indeed, in Anaheim, the amount of people who go to cooling centers specifically due to the heat is “average to low,” said city spokesman Mike Lyster late last month.

While usage of these places primarily for their air conditioning may be low, Councilman Moreno said that doesn’t mean a vast swath of his city’s low-income communities don’t need them.

He said the rate at which people come to these centers for respite from the heat could be influenced by factors like the centers’ proximity to the communities that need them most, and whether they fall within the daily routines of people’s lives.

“That’s not too different from how we think about public spaces and what gets people to want to be part of a public space,” Moreno said. “How do you get people on their daily routine? Where do folks go for their leisure?”

Cooling centers, he added, are often associated with the idea that “folks are going to simply leave their homes and sit down in these centers and soak up cool air conditioning.”

But people have things to do, Moreno said, adding that getting more people to come to cooling centers means offering ways for people to remain productive and uninterrupted in their daily lives.

For example, there are community centers in the city that have air conditioning, have multi-purpose rooms and provide activities like “bingo, Lotería, and places for people to plug in their technology,” he said. “It seems to me that the cooling centers can’t be just seen as cooling centers.”

Similarly, Garden Grove Councilwoman Nguyen said public usage of these spaces comes down to the way cities market the services and how far away the services are from the people who need them most.

In Orange County’s Little Saigon area, which spans her city, there are many seniors, multi-family households and people living in accessory dwelling or “granny” units that may not have adequate air conditioning.

Nguyen said one idea would be to open up city-owned facilities in different parts of the city that already have air conditioning but aren’t necessarily considered a cooling center, to provide flexible options for residents.

Moreno said climbing temperatures will also lay bare the issue of housing in the region: “Increasingly, with a lack of affordable housing, you get overcrowded housing. Even with air conditioning in a unit, if you have two or three families living in there, it’s tough — it’s tough.”

“It’s an extremely timely and important topic to be considering,” he added, “one I don’t think is getting enough attention.”

Here’s one public database displaying a map of cooling centers that are currently online in Orange County.