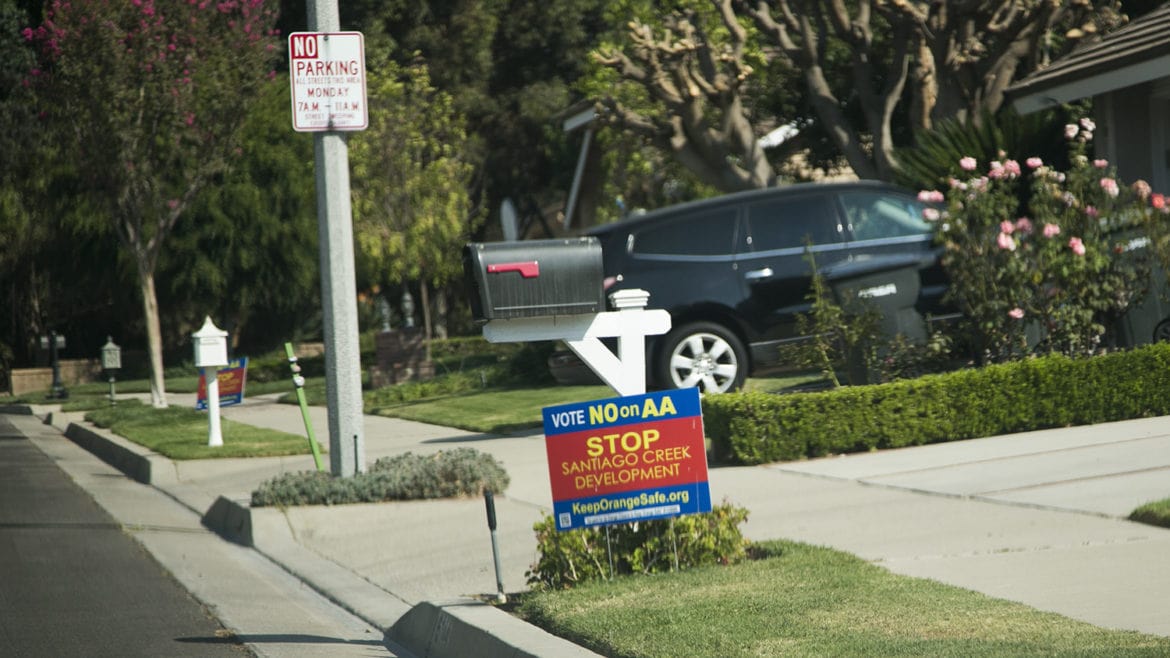 The project property sits on a 109-acre sand-and-gravel site on the north side of Santiago Canyon Road, formerly used by the Sully-Miller Contracting Co. as a rock-crushing quarry.

A contentious land use battle chock-full of political spending is playing out in the City of Orange, and comes to a head in November after residents decide on whether they want 128 homes on an old quarry site in the city’s east end.

The project, officially appearing on the November ballot as “Measure AA” and pushed by real estate company Milan Capital Management, has been called many things by many stakeholders:

To supporters, it’s an engine of open space — an air quality, traffic congestion, and housing needs “fix” that would result in more untouched, undeveloped land than there would be housing.

To opponents, it’s a “dangerous” wildfire and traffic congestion hazard — an “affront to democracy” when city council members cleared the way for the project last year despite public protest.

One thing is certain: the company proposing the development is spending big during this election cycle marketing it to residents, in the hopes a majority of them vote yes on it.

Milan Capital Management this year gave $700,000 so far to a committee formed to support and promote the ballot measure, according to the latest campaign finance disclosures posted online covering January to September.

By comparison, a committee formed by residents to oppose the measure logged $15,600 in fundraising this year so far, mainly from individual community members, according to filings for that committee covering the same period.

In October last year, Orange City Council members listened to dozens of public comments against the project before unanimously agreeing to rezone the property to fit the project’s residential component.

The reason the decision’s now going to residents is because enough people — more than 13,000 registered voters in the city — signed the petition for a referendum, which county elections officials approved in February.

The project property sits on a 109-acre sand-and-gravel site on the north side of Santiago Canyon Road, formerly used by the Sully-Miller Contracting Co. as a rock-crushing quarry. 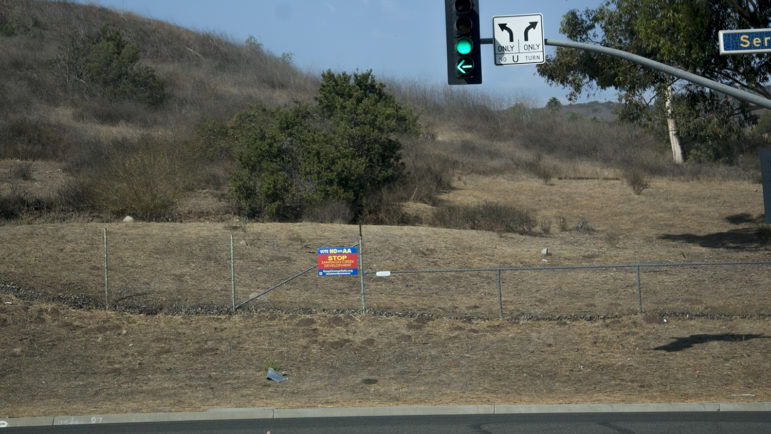 A “No” on Measure AA sign along Santiago Canyon Rd.

Yet a core argument among the project’s opponents’ is that development will worsen traffic congestion amid the presence of few evacuation routes in the event of a wildfire, which critics say could lead to congestion similar to the back-up seen during the evacuation from the 2017 fire in that area.

“The area has few evacuation routes. During the 2017 Canyon II Fire, cars were backed up for miles trying to flee,” reads part of the argument against the project attached to the county’s official ballot guide.

Critics also cite the presence of methane gas in the area from nearby landfills as a serious health concern for anyone living in the homes Milan plans to build there.

“I’m confused why the only proposal is for development and can’t be addressed as open space without new homes, and why it has to be done through for-profit means,” said Orange resident John Ansett, who runs the area’s nearby trail frequently, in an interview.

It’s the addition of the houses that Ansett said he and others are against: “It should be designated or developed as open space, but not for the profit of some developer.”

A request for comment from Milan yielded a response from the spokesman for the campaign to get Measure AA approved, John Davies.

Davies told Voice of OC the measure “represents an incredible compromise and deal,” calling the project an engine of open space in the city and pointing out that the homes will be low density:

“That leaves 40 acres of really low density homes. Lower density than most homes in that area,” he said.

The end result will be more open space than developed space, he said — 120 acres of it, according to supporters of the project, which according to the county’s official ballot guide includes former Orange Park Association president Tom Davidson and Santiago Greenway & Open Space Alliance founder Mark Moore.

Davies dismissed the concerns about the traffic, pointing to Milan’s commitment to add new traffic lanes on nearby roads, and rejected claims the project’s unneeded and unwanted by the community.

“The support for the measure is strong — there’s a lot of quiet support from residents in neighborhoods close to the project,” he said, also pushing back on claims the process has in any way been undemocratic: “The City Council listened to all sides, heard lengthy hearings, and formed decisions after extensive environmental reviews and studies.”

“They’re supposed to make a decision for the betterment of the entire community — not for a handful of NIMBYs,” he said.

Meanwhile, the political money swirling around this ballot measure has been thoroughly put to use:

The committee supporting Measure AA spent much of the $700,000 it received from Milan largely on web or IT services, phone banks, mailers, postage, and political consultants.

The committee opposing Measure AA spent more than $12,300 of the $15,600 it received over the same period — much of that money going to print ads, phone banks, and mailers.