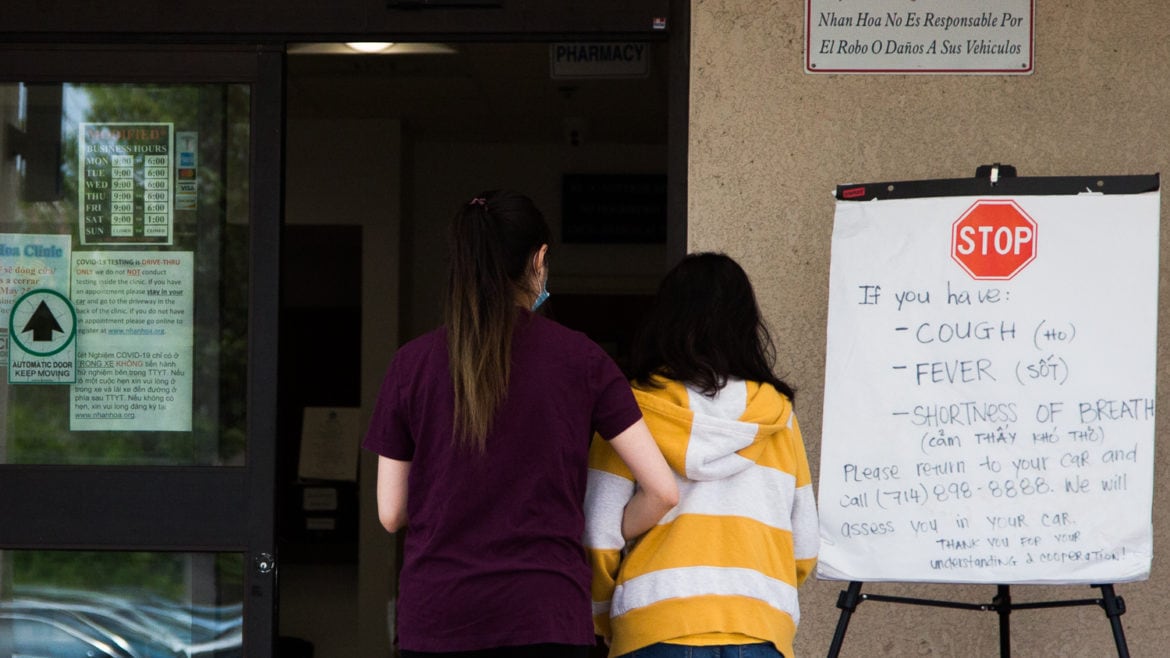 Nhan Hoa Comprehensive Care Clinic in Garden Grove on May 18, 2020.

Ellen Ahn, executive director of the Buena Park-based Korean Community Services, said a family she goes to church with all eventually tested positive for the virus and the father didn’t know where to go for help.

“I have a friend I go to Korean church with — we speak korean together. He started coughing and having a fever and he does not speak English. He called me in a panic and we got him tested,” Ahn said at a Friday News conference. “The entire family became positive, because this was a multigenerational family … living together in a small townhouse.”

She said her friend’s father died last month after being hospitalized for the virus twice.

“The fear in my friend’s eyes, I could see,” Ahn said. “The entire family except the 8-year-old daughter does not speak English.”

“I just want you to take a moment of what COVID-19 is like through the eyes of an immigrant who does not speak English.”

That requirement was quickly slammed by county officials, who called it a “one-size-fits-all” approach and placed an undue burden on the county’s ability to move into less restrictive tiers in terms of what areas and businesses were allowed to reopen while virus transmission fears abound.

Yet, officials for much of the course of the pandemic backed off key virus containment efforts – such as restaurant enforcement and a mandatory mask order – that left working class communities vulnerable until statewide orders were issued.

Latinos, while making up roughly 35% of OC’s population, have 48% of the total Covid confirmed cases, according to county Health Care Agency data.

Latinos also make up nearly half — 44% — of virus deaths.

Asian Americans, which comprise 21% of the county population, make up over 8% of the COVID-19 cases and 18% of the deaths.

Although the case burden on OC’s Asian American population as a whole isn’t as severe as it is for Latinos, there are pockets of the community that are hit hard.

Vattana Peong, executive director of the Cambodian Family Community Center, said the Cambodian community’s testing positivity rate has been as high as 18 percent.

He said there’s been language barriers the community’s faced along the way.

Shikha Bhatnagar, executive director of the South Asian Network, said nearly all the available resources haven’t been translated to South Asian languages like Hindi and Punjabi.

“Very little if any resources have been available to our community in our language,” Bhatnagar said at the news conference.

Since the pandemic began in March, the virus has killed 1,401 county residents out of 56,587 confirmed cases.

As of Friday, there were 170 people hospitalized for the virus, including 66 in intensive care units.

Over 975,000 tests have been conducted throughout OC, which is home to roughly 3.2 million people. Some people, like medical workers, get tested numerous times.

The Asian and Pacific Islander task force also joins a similar effort by the Santa Ana-based Latino Health Access to address infection rates in predominantly Latino neighborhoods and areas where many residents don’t have the ability to work from home.

Latino Health Access CEO America Bracho was instrumental in getting case rates by zip codes published at the beginning of summer. The data allows researchers to see where the virus hot spots in the county are.

Ahn said the task force is working closely with Bracho and “really learning from what they did because they got a head start and also not to duplicate efforts. So we see this as a collective, beyond the API task force.”

Much of those living in Little Saigon are renters living in multi-family residential units or accessory dwelling units on other people’s property, also known as “granny flats.”

Garden Grove is also home to the region’s Koreatown, where many families face similar overcrowded housing situations like Little Saigon.

Preoccupying much of Little Saigon’s concerns are the ability to reopen the cultural hubs’ array of restaurants and shops.

And the state’s reopening nail salons throughout the county, one of the largest employers of Vietnamese Americans, only came after vocal outcry among political leaders and industry organizations.

“You will see that the Health Care Agency will really take a new approach,” Chau said in response to Voice of OC’s question.

“So in the population health lense, which actually public health version 2.0 has been changing and introducing to the community, is that we really have to collaborate and pay attention to issues like health equity,” Chau said. “And equity in general.”