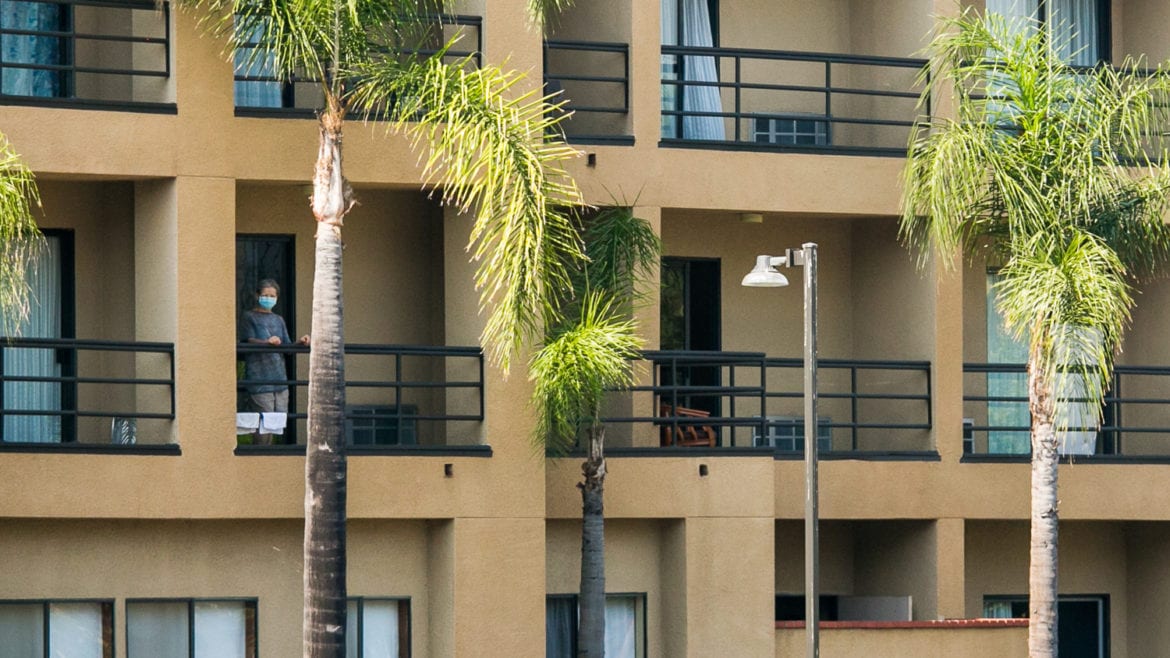 It’s prompting questions about where people will go next, amid a housing shortage and reduced capacity at shelters to allow for more distancing.

Residents at several motels received notice last Tuesday that the Roomkey program would be closing Oct. 16 or 23, according to county officials and people living there. The sites slated for closure next Friday are the Laguna Hills Inn and Holiday Inn Anaheim, followed a week later by Springhill Suites in Huntington Beach and ALO Hotel in Orange on Oct. 23, and Stanton Inn & Suites on Nov. 11.

“I think the community is concerned about…what happens when the Project Roomkey program ends, relative to the participants in the program at that time,” said OC Supervisor Lisa Bartlett, who was the only county supervisor to take an interest in the program’s closure last week.

As of last week, the hotel program was sheltering 557 people who are at higher risk from COVID-19 due to age and medical conditions, and another 23 homeless people who have tested positive and are in isolation, according to the county.

“When the program ends in [a] particular city, we’re not going to just open the doors and let people wander out,” Bartlett said. “Every single individual that is a participant in Project Roomkey will have an opportunity to get into either permanent supportive housing, other housing options, shelters, other recuperative care programs. That we will give them that next step into a program with wraparound services.”

It remains to be seen if that will happen. County officials say they’re working to find alternative options for people, in an effort they’re calling Project Toolbelt. In the last month, officials say 87 people have been linked to shelter or housing, though they would not say if there are enough available shelter beds and housing for the more than 500 people remaining in the motels.

“The County does not track occupancy for all shelters as many are city or privately operated,” said Jason Austin, the director of the county’s office of care coordination, in written responses to questions. People who came to Roomkey from a shelter will be able to return to the shelter, he said.

“Our goal is to engage every participant in the motels, assess them for every possible housing option by using every housing ‘tool in the toolbelt,’ and facilitate housing options for every person who does not want to return to the street,” Austin said.

The isolation program for people who have tested positive for coronavirus will continue, with people at the north county location (ALO Hotel in Orange) being relocated to another site, Austin said.

In interviews, several motel residents said they’ve been told they were added to a waitlist for a place to go next, with no clear sign of whether it will actually be available by the time they have to leave the motel.

People also have been given the option of getting dropped off at the original place they were picked up when they first entered Roomkey, according to one participant.

“There’s a lot of people here that just don’t know where they’re going to go,” said Vanessa Hernandez, a disabled homeless student who’s been living at the Huntington Beach motel site. Many of the other residents are disabled or veterans, or both, Hernandez said.

“Everybody just kind of got notified,” she said last Wednesday, the day after notifications went out that the site was closing on Oct. 23. “Nobody knows what to do.”

Morgan Kephart, a homeless mother who’s been staying at the Roomkey motel in Anaheim, said she’s one of the fortunate ones because she came to the hotel from Santa Ana, where city officials happened to have a voucher she could use for a place.

But she said she’s concerned about others at the motel who aren’t as fortunate.

“There’s a lot of elderly here. And they would just not make it on the street,” said Kephart, who added she was appreciative of the work the Roomkey contractors, Illumination Foundation and City Net, have done.

There continues to be a lot of uncertainty about where people will end up, according to Brooke Weitzman, one of the leading attorneys for homeless people in Orange County.

“We learned about the County plans to close Roomkey when our clients received two week eviction notices despite the CDC’s clear position that keeping people housed where they are is critical. So far we have been unable to get adequate information on what plans, if any, exist for how many of the over 500 seniors and medically vulnerable people in Roomkey,” Weitzman told Voice of OC on Monday.

“While the County assures us they have plans, I have serious concerns that while covid is still running rampant in our community hundreds of seniors are at risk of being left in the street or forced back into congregate shelters. As always, we hope to collaborate with the County over the next few days on solutions and stand ready to act if that fails.”

County officials briefly discussed plans to wind down Project Roomkey during a public meeting last week, and hinted the reason could be related to the expiration of federal CARES Act dollars at the end of December.

Orange County Health Care Agency officials, who oversee the Roomkey program, attribute the closure of Roomkey to the Dec. 30 deadline to spend federal CARES Act money, which the county has been using to cover 25 percent of the Roomkey leases.

The other 75 percent of the lease cost is covered by the Federal Emergency Management Agency, which has approved all of California’s monthly requests for Roomkey dollars.

Asked where people at Roomkey motels will go if they don’t have somewhere else to relocate, county officials reiterated they’re working to find options for people. If people do not have a place to go, or decline an option provided, the plan is to transport them back to the city or community where they were originally referred into the Roomkey program.

One of the motels, the site in Stanton, will be converted into a longer-term housing option for homeless people with support services. Current residents there under Project Roomkey have been asked to find alternative housing by Nov. 11.

County officials did not issue any press releases announcing the motel closures, and discussed it briefly last week only when asked by Bartlett. She was the only supervisor who took interest in the motel closures and what would happen next.

Officials will continue to look for places for people to go when Roomkey closes down, said Paul Leon, founder and CEO of Illumination Foundation, which is contracted by the county to run the motel shelters.

“There will be some people who don’t have a…readily available option” for another place to go, said Leon, adding there’s about 600 people in the Roomkey program.

While shelters had to significantly reduce their capacity earlier in the pandemic, they’ve been able to adapt with safety measures that allow for more capacity. Leon says he’s been advocating for shelters to be able to operate at 80 or 85 percent of capacity.

He also noted the county’s been moving to purchase two of the Roomkey hotels to turn them into a longer-term solution – permanent supportive housing, as part of the state’s Project Homekey program.

The goal, he said, is to offer everyone in the Roomkey motels an alternative place to stay after the program closes.

“Hopefully everybody will get a spot. And we’re obviously trying.”